Devotion of the Week - No Weapons Against Us 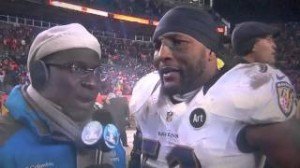 The NFL playoffs brought great drama this year. There were many high-scoring games and most were tightly contested. But one player’s story came to the limelight – Ray Lewis. At the beginning of the postseason, he announced it would be his last ride, his career would be over at the Super Bowl or once the Ravens lost.

Going into the Ravens second round game at Denver, Ray Lewis and his teammates were big underdogs. The game had many twists and turns with punt and kick returns for touchdowns, deep passes, a 70 yard touchdown with 30 seconds left in the game on a defensive blunder, and a game-winning field goal in double overtime. Ravens’ kicker Justin Tucker was the hero for the Ravens as his 47-yard field goal went through the uprights to lead Baltimore to a 38-35 double overtime win.

The one thing that has stood out to me about that game was the interview that Lewis gave with CBS reporter Solomon Wilcots after the game. This has been an emotional ride not only for Baltimore, but for the former Miami Hurricanes’ linebacker himself. As the interview began, Wilcots asked Lewis about how the Ravens were able to pull the upset against a team in the Broncos that came into the game with a 11-game winning streak. Lewis quoted part of Isaiah 54 to Wilcots:

“No weapon formed against you shall prosper,
And every tongue which rises against you in judgment
You shall condemn.
This is the heritage of the servants of the Lord,
And their righteousness is from Me,”
Says the Lord.” (Isaiah 54:17)

Ray Lewis has had his checkered problems in the past. Everyone wants to talk about his six children with four different women or the incident he was involved in with his friends at the Super Bowl in 1999. (EDITOR’S NOTE: And now there’s the deer antler spray controversy) However, Lewis is known as a devout Christian in a lot of NFL circles. I watched “A Football Life” documentary on NFL Network about Lewis and it completely changed my perception on him because God came up first and foremost in a lot of his conversations.

It also got me to read more into Isaiah 54, which talks about the future glory of Zion (Jerusalem). The reason the prophet was talking about this was to give the people hope as the Israelites were being held captive by the Babylonians at the time. The people of Israel were wondering if God still cared about them and loved them.

The LORD, however, assures his covenant of peace in this chapter. When we are fighting our fears or are in distress, God is always there, even though the situation may not be the most optimal for us here on Earth.

In that documentary, Lewis talked about the Ravens’ loss to the Patriots in the 2011 AFC Championship Game. Everyone was quick to pin the blame on wide receiver Lee Evans for dropping the game-winning touchdown or kicker Billy Cundiff who missed a perceivable chip-shot field goal to send the game into overtime. However, Lewis was quick to point out about how the Ravens lost as a team and that God doesn’t make mistakes.

Sometimes, God’s Will does not happen at the exact time we want or it does not coincide with the plan we thought about in our own head. The critics might not understand what the plan might is and sometimes, we are at a loss for words. However, we have to trust that God is in control! Paul told this to the Romans in his epistle:

Today, I exhort you to look at your situation and although there may be obstacles and barricades standing in your way, look to the Lord and the righteousness that He brings us through the death of His Son. As mentioned before, Isaiah 54 talks about how the people of Jerusalem were separated because of captivity, but they had hope of a future restoration of their city.

Today, we Christians have that same hope, as we press onward towards the goal of joining Our Father in Heaven as part of the Eternal Restoration of the New Jerusalem! So, despite the obstacles and being placed in an unfriendly situation, keep pressing onward with the Eternal Hope that one day we will be in the restored Jerusalem and get to view the fullness of God’s Glory!