The Heart Of A Man 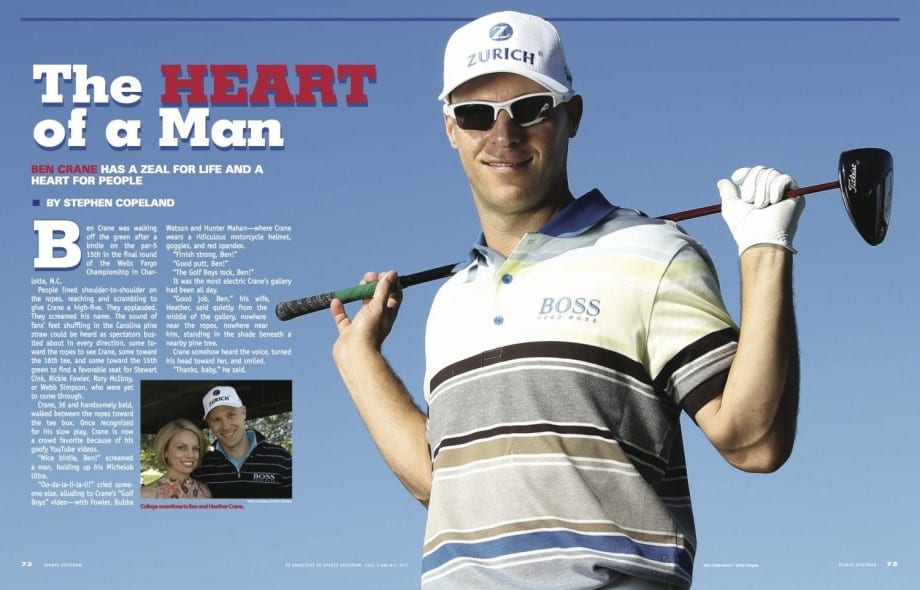 On Tuesday, Ben Crane and the “Golf Boys” released their second single, “2.Oh,” as they continue to revolutionize the image of the PGA Tour. Our feature on Crane, “The Heart Of A Man,” was published in the Summer 2012 issue of Sports Spectrum.

Ben Crane was walking off the green after a birdie on the par-5 15th in the final round of the Wells Fargo Championship in Charlotte, NC.

People lined shoulder-to-shoulder on the ropes, reaching and scrambling to give Crane a high-five. They applauded. They screamed his name. The sound of fans’ feet shuffling in the Carolina pine straw could be heard as spectators bustled about in every direction, some toward the ropes to see Crane, some toward the 16th tee, and some toward the 15th green to find a favorable seat for Stewart Cink, Rickie Fowler, Rory McIlroy, or Webb Simpson, who were yet to come through.

Crane, 36 and handsomely bald, walked between the ropes toward the tee box. Once recognized for his slow play, Crane is now a crowd favorite because of his goofy YouTube videos.

It was the most electric Crane’s gallery had been all day.

“Good job, Ben,” his wife Heather said quietly from the middle of the gallery, nowhere near the ropes, nowhere near him, standing in the shade beneath a nearby pine tree.

Crane somehow heard the voice, turned his head toward her, and smiled. 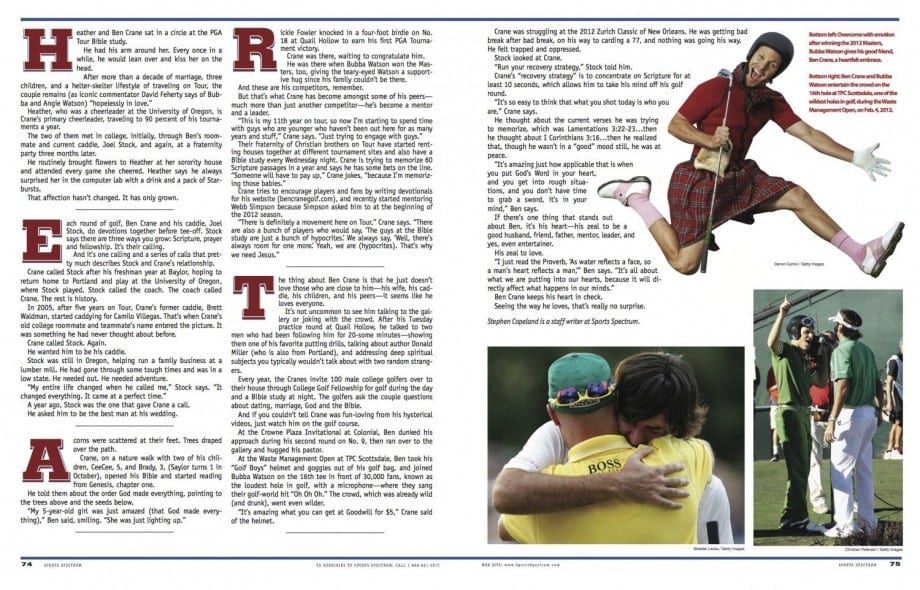 Heather and Ben Crane sat in a circle at the PGA Tour Bible study.

He had his arm around her. Every once in a while, he would lean over and kiss her on the head.

After more than a decade of marriage, three children, and a helter-skelter lifestyle of traveling on Tour, the couple remains (as iconic commentator David Feherty says of Bubba and Angie Watson) “hopelessly in love.”

Heather, who was a cheerleader at the University of Oregon, is Crane’s primary cheerleader, traveling to 90 percent of his tournaments a year.

The two of them met in college, initially, through Ben’s roommate and current caddie, Joel Stock, and again, at a fraternity party three months later.

He routinely brought flowers to Heather at her sorority house and attended every game she cheered. Heather says he always surprised her in the computer lab with a drink and a pack of Starbursts.

That affection hasn’t changed. It has only grown.

Each round of golf, Ben Crane and his caddie, Joel Stock, do devotions together before tee-off. Stock says there are three ways you grow: scripture, prayer and fellowship. It’s their calling.

And it’s one calling and a series of calls that pretty much describes Stock and Crane’s relationship.

Crane called Stock after his freshman year at Baylor, hoping to return home to Portland and play at the University of Oregon, where Stock played. Stock called the coach. The coach called Crane. The rest is history.

In 2005, after five years on Tour, Crane’s former caddie, Brett Waldman, started caddying for Camilo Villegas. That’s when Crane’s old college roommate and teammate’s name entered the picture. It was something he had never thought about before.

He wanted him to be his caddie.

Stock was still in Oregon, helping run a family business at a lumber mill. He had gone through some tough times and was in a low state. He needed out. He needed adventure.

“My entire life changed when he called me,” Stock says. “It changed everything. It came at a perfect time.”

A year ago, Stock was the one that gave Crane a call.

He asked him to be the best man at his wedding.

Acorns were scattered at their feet. Trees draped over the path.

Crane, on a nature walk with two of his children, CeeCee, 5, and Brady, 3, (Saylor turns 1 in October), opened his Bible and started reading from Genesis, chapter one.

He told them about the order God made everything, pointing to the trees above and the seeds below.

“My five-year-old girl was just amazed (that God made everything),” Ben said, smiling. “She was just lighting up.”

Rickie Fowler knocked in a four-foot birdie on No. 18 at Quail Hollow to earn his first PGA Tournament victory.

Crane was there, waiting to congratulate him.

He was there when Bubba Watson won the Masters, too, giving the teary-eyed Watson a supportive hug since his family couldn’t be there.

And these are his competitors, remember.

But that’s what Crane has become amongst some of his peers—much more than just another competitor—he’s become a mentor and a leader.

“This is my 11th year on tour, so now I’m starting to spend time with guys who are younger who haven’t been out here for as many years and stuff,” Crane says. “Just trying to engage with guys.”

Their fraternity of Christian brothers on Tour have started renting houses together at different tournament sites and also have a Bible study every Wednesday night. Crane is trying to memorize 60 Scripture passages in a year and says he has some bets on the line. “Someone will have to pay up,” Crane jokes, “because I’m memorizing those babies.”

Crane tries to encourage players and fans by writing devotionals for his website (bencranegolf.com), and recently started mentoring Webb Simpson because Simpson asked him to at the beginning of the 2012 season.

“There is definitely a movement here on Tour,” Crane says. “There are also a bunch of players who would say, ‘The guys at the Bible study are just a bunch of hypocrites.’ We always say, ‘Well, there’s always room for one more.’ Yeah, we are (hypocrites). That’s why we need Jesus.”

The thing about Ben Crane is that he just doesn’t love those who are close to him—his wife, his caddie, his children, and his peers—it seems like he loves everyone.

It’s not uncommon to see him talking to the gallery or joking with the crowd. After his practice round on Tuesday at Quail Hollow, he talked to two men who had been following him for 20-some minutes—showing them one of his favorite putting drills, talking about author Donald Miller (who is also from Portland), and addressing deep spiritual subjects you typically wouldn’t talk about with two random strangers.

Every year, the Cranes invite 100 men’s college golfers over to their house through College Golf Fellowship for golf during the day and a Bible study at night. The golfers ask the couple questions about dating, marriage, God, and the Bible.

And if you couldn’t tell Crane was fun-loving from his hysterical videos, just watch him on the golf course.

At The Crowne Plaza Invitational at Colonial, Ben dunked his approach during his second round on No. 9, then ran over to the gallery and hugged his pastor.

At the Waste Management Open at TPC Scottsdale, Ben took his “Golf Boys” helmet and goggles out of his golf bag, and joined Bubba Watson on the 16th tee in front of 30,000 fans, known as the loudest hole in golf, with a microphone—where they sang their golf world hit “Oh Oh Oh.” The crowd, which was already wild (and drunk), went even wilder.

“It’s amazing what you can get at Goodwill for $5,” Crane said of the helmet.

Crane was struggling at the 2012 Zurich Classic of New Orleans. He was getting bad break after bad break, on his way to carding a 77, and nothing was going his way. He felt trapped and oppressed.

Crane’s “recovery strategy” is to concentrate on scripture for at least 10 seconds, which allows him to take his mind off his golf round.

“It’s so easy to think that what you shot today is who you are,” Crane says.

He thought about the current verses he was trying to memorize, which was Lamentations 3:22-23…then he thought about 1 Corinthians 3:16…then he realized that, though he wasn’t in a “good” mood still, he was at peace.

“It’s amazing just how applicable that is when you put God’s Word in your heart, and you get into rough situations, and you don’t have time to grab a sword, it’s in your mind,” Ben says.

If there’s one thing that stands out about Crane, it’s his heart—his zeal to be a good husband, friend, father, mentor, leader, and yes, even entertainer.

His zeal to love.

“I just read the Proverb, ‘As water reflects a face, so a man’s heart reflects a man,’” Ben says. “It’s all about what we are putting into our hearts, because it will directly affect what happens in our minds.”

Seeing the way he loves, that’s really no surprise.