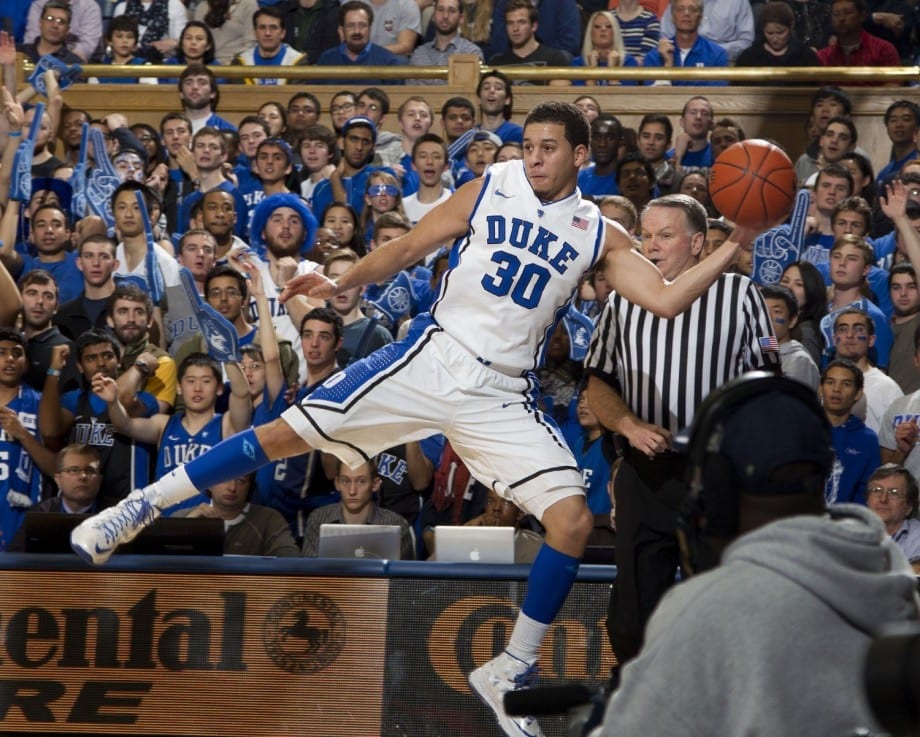 Every week Bryce Johnson is joined on his faith and sports podcast, Unpackin’ It, by inspiring guests to discuss sports, faith and life. Listen to the full audio of all his interviews on unpackinit.com. Below are some highlights from Bryce’s interview with Bob Harris, who spent 45 years in broadcasting and has been the play-by-play voice of the Duke Blue Devils since 1976. The Hall of Fame broadcaster has called more than 1,200 basketball games and 400 football games.

BRYCE JOHNSON: As someone who is so entrenched with the Duke program, how do you handle it when Duke loses?
BOB HARRIS: Better than I used to, let’s put it that way! But, you know, about the third or fourth year I had the Duke job, I remember we had lost a football game and I was heading home and I was just really grousing about it, and all of a sudden, and I don’t know why, but something just told me, “Bob you get paid the same dollar for a win or a loss. You don’t have to take it so hard.” So I try to keep that in perspective. But, I travel with these kids all the time; I’m with them three or four days a week, sometimes more. I get to know them, I know their parents…so you get attached to people like that, and you want to see them be successful. They’re almost like your kids. You don’t want any harm to come to them; you don’t want to see them have to deal with setbacks. But just like raising your own children, you know those are going to come, and you have to be there to do whatever you can to help them get through it. I’ve even been a little bit of a sounding board sometimes when guys were struggling, and that made me feel really good that they trusted me enough and thought enough of me to include me in their private life.

BRYCE JOHNSON: What is your advice to young broadcasters?
BOB HARRIS: Don’t try to be the next somebody. Be the best “your name” that you can be. Listen to all these other broadcasters, listen to the veterans to see how they do things, what they say, how they describe things, but don’t try to copy me or Jones Angell (UNC), or Gary Hahn (NC State) or Stan Cotten (Wake Forest)…but listen and see how we do it because we’ve got a lot of experience in calling football and basketball games. I think sometimes the younger people get a little bit antsy. They wanna have it happen now, and it’s not going to. You’ve got to pay your dues.

BRYCE JOHNSON: What has your faith journey been like?
BOB HARRIS:  At times it’s been a little bit bumpy, but it’s one of those things that always gets back on the straight and narrow, and I think in these last several years my faith has been strengthened even more because of the way our world is and the way our country is. At times I fear for our country because we have blocked God away from ourselves. The “me generation” is going to wake up and find out it should have been the “He generation” because that’s the only way we’re going to get through this current situation…I’m not one to tell anybody how they should live their lives, but I do know how I’ve tried to live mine, and what I believe in, and the things that I believe in are, in some instances, diametrically opposed to the way a lot of people are living. I pray for them and hope that they see the light and the error of their ways, at least as I see it… You wanna grab them around the neck with your arm and say, “Listen, there’s a better way and I hope before too long you recognize that way.”

BRYCE JOHNSON: Since you have known Coach Mike Krzyzewski for so long, what can you tell us about him?
BOB HARRIS: Well, being with Mike for 33 years now, the one thing that I do know is it doesn’t matter whether you’re a star player on this team or the last guy off the bench or a secretary in the office or the custodian that keeps his office cleaned up or the guy that does his radio broadcast. If you watch him, if you listen to him, if you just observe how he handles situations, you’re going to learn something every time you’re around him. And I think you’re going to be a better person in how you deal with people. I’m not trying to put Mike up on a pedestal or anything, but being as close to him as I have for these 33 years, I know what kind of man he is. I know where he came from, I know a good portion of his family and I know how he thinks about a lot of things. I tell people a lot of times that he is, in my opinion, probably the most misunderstood and under-appreciated person I have ever come in contact with because he does so many things out of the camera eye and out of the sight of other people.

This column was published in the March 2013 Sports Spectrum DigiMag and Volume 27, No. 2 print magazine. Print and digital subscribers, log in and view the issue here. Bryce is the host of the “Unpackin’ It” faith and sports podcast. Follow Bryce on Twitter-@BRYCERADIO.