Peyton Siva lives by slogan, 'It's All Jesus' 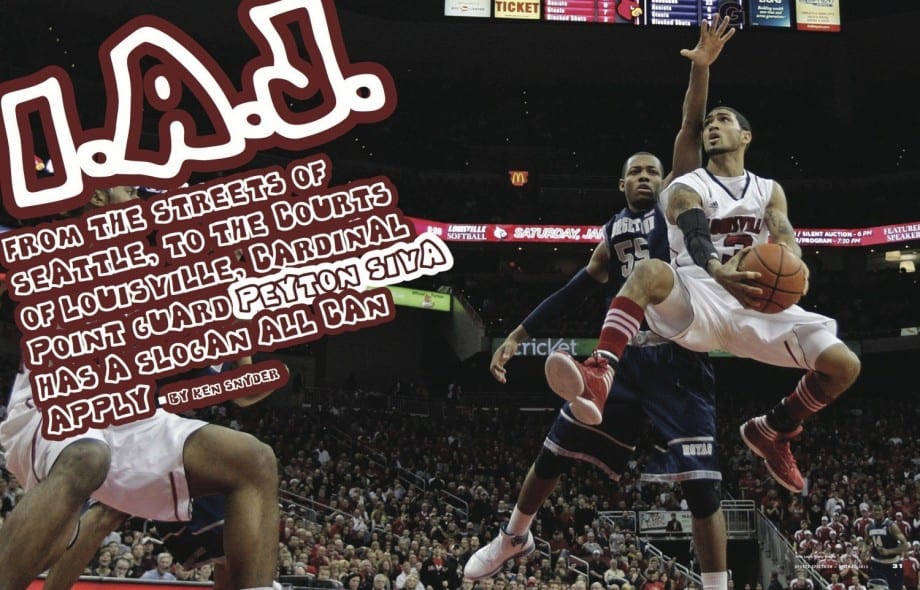 The scene would have been familiar to basketball fans of the University of Louisville: Peyton Siva going end-to-end to dunk a game-winner over a 7-footer as time expired. It didn’t matter that the game was the last of a series of exhibitions on a Far East mission trip against a Russian team. It was time for someone to step up and take responsibility for the game’s outcome.

Accepting responsibility and responding to pressure is nothing new for the shy 6-footer whose face easily creases into a glowing, world-class smile. He grew up in one of the roughest areas of Seattle with criminal tentacles extending into his family and all but ensnaring Siva himself. “My brother, he was in jail. My Dad was in and out of jail. My sister had been in and out of jail,” says Siva.

The classic basketball as the “route-out” story had a different plot line for Siva. His talent as even a high school freshman attracted assorted hangers-on, back-slappers, etc.—the “entourage.”

“He had so many people pulling at him at such a young age,” recalls Danny Cage, youth pastor at Mount Calvary Christian Center in Seattle. That pressure brought Siva to Cage, the church, and ultimately, to God. “He wanted to be focused spiritually through that. It separated him from the pack. He would study scriptures, and fast, and would ask to be held accountable,” adds Cage.

A Cage acronym “I.A.J.,” “It’s All Jesus,” undergirded Siva through a high school career that included selection as a McDonald’s High School All-American.

Siva’s selection by Louisville, among numerous suitors, and the path to the Big East and big-time basketball is not the most important one carved by God in his life and in his family. Today, Siva’s father, brother and sister are all in church. Cage, who is on the phone to Louisville daily, says what Siva wouldn’t: They have come to know God through Peyton.

The two-week mission trip to the Far East after Siva’s freshman year was a chance for those around Siva to see him step up at critical times in games like the one against a Russian team. As well, it was an opportunity for others to see that there is something different and special about him. “His mannerisms, the way he carries himself, the way the guys respond to him—people follow him,” says Robby Speer of Sports Reach, whose ministry sponsored the trip. “He’s a leader. He accepts responsibility.”

Accepting responsibility at crunch time for Louisville, which is in, arguably, the toughest conference in college basketball is, again, something familiar to Cardinal fans. You can see it in the final minutes of close games; Siva wants the ball and the responsibility for the outcome. For him, however, it is part of a larger responsibility.

“God lifts us up so we can lift Him up,” Siva says. “He’s definitely using me in basketball to give Him glory and to use me to show other kids that God is with you and God has a plan for you no matter whether it’s basketball, football or being a doctor.”

Or learning to overcome the pressures of early fame and Seattle streets.