By Stephen Copeland Apr 9, 2013
I was trying to sing “Jesus the Nazarene” but instead stood amazed in the presence of my own stupidity. We were at White’s Ferry Road Church of Christ in West Monroe, La., attending church with the Robertson family, the clan of redneck millionaires featured on the hit-program Duck Dynasty on A&E—and that’s when it hit me... 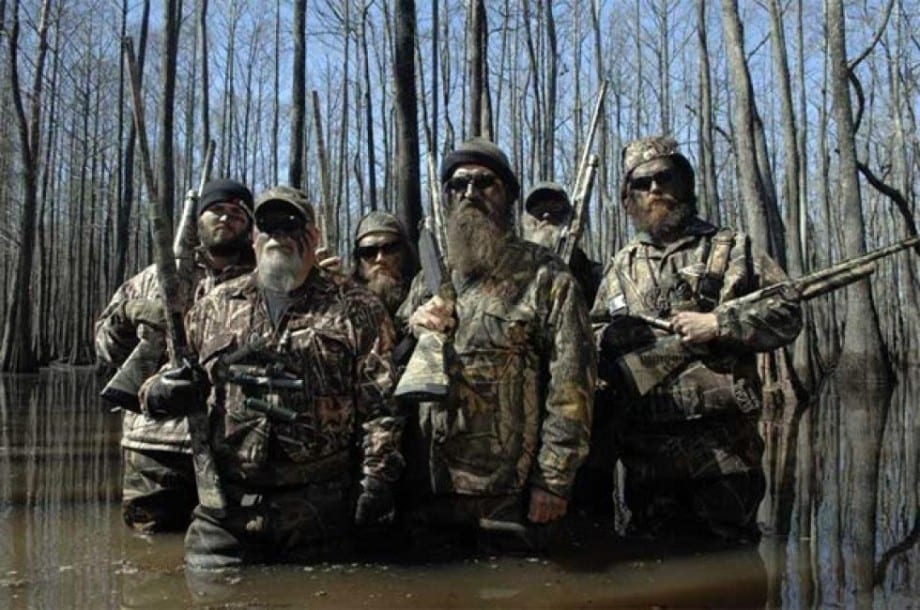 I was trying to sing “Jesus the Nazarene” but instead stood amazed in the presence of my own stupidity.

We were at White’s Ferry Road Church of Christ in West Monroe, La., attending church with the Robertson family, the clan of redneck millionaires featured on the hit-program Duck Dynasty on A&E—and that’s when it hit me.

I stared up at the ceiling and bit my lip, like I had just thrown an interception. The Robertsons sang joyfully in the row in front of us. I wanted to sing along but could no longer focus. Moisture appeared on my forehead like dew, as did red splotches on my neck, like flowers blooming.

Idiot, I said to myself.

A couple Sundays ago, I was sweating in church because the man in front of me was groping his significant other, as if they were in the privacy of their bedroom. I think he had his coffee in one hand and his woman’s derrière in the other, as he bobbed his head to an epic guitar solo on stage. Protestants, I sighed, as I took a sip of coffee and opened the Bible App on my phone.

That was more out of fear something R-rated was about to unfold in the middle of worship; this time, the time with the Robertsons, I was sweating out of sheer embarrassment—both uncomfortable nonetheless, both void of focus.

“Brett,” I whispered to my editor. He turned. I gulped.

“I left my voice recorder in Willie’s office,” I stupidly said.

Here we were, a national magazine that has been around for 29 years and one of its dimwit reporters left his recorder at the interview—back at the Duck Commander warehouse where Willie and his father Phil, his mother Miss Kay and his brother Al graciously gave us two hours of their time before Wednesday night church service.

In case you’re wondering, a reporter forgetting his recorder would be like Jimi Hendrix forgetting his guitar backstage or Obi-Wan leaving his light saber on his nightstand before one of the Clone Wars. If any of the Robertsons would have turned around and seen me, they may have suspected I was about to go up front to the altar, or that I was a nervous fellow, or that I simply had the runs.

The pastor of White’s Ferry supposedly gave a great sermon that evening, a sermon I didn’t hear. My mind was journeying through some sort of fictional nightmare where Willie would find my recorder the next day, then suspect we were attempting to sort of wiretap his office, then talk about it on Duck Dynasty, tainting Sports Spectrum’s credibility in front of millions.

I wondered if my imagination was playing tricks on me. So after church, I scurried out of the sanctuary (like I had the runs) and into the parking lot to search the car. I searched it like I was TSA. Nothing.

Defeated, I walked back toward the church. That’s when I saw Uncle Si in the parking lot. He was talking to someone—Justin Martin, I think—and he was shooting an imaginary gun, maybe explaining a story or perhaps shooting something imaginary.

I thought about approaching Si and asking him for a ride to the warehouse. I pictured him driving us there, then realizing he didn’t have a key because Willie didn’t trust him enough, then climbing through a window with me. Alarms would go off, and the cops would come. It’d still ruin the credibility of our magazine, but it would make a nice column, “Si and I” or “The Sound of Sirens” or something.

But I decided to keep walking, swiftly dodging his imaginary bullets. Si and I together would be bad news, anyway. The world may implode, I concluded.

When I returned to the sanctuary, Miss Kay was giving out “goodbye” hugs, thanking us, ironically, for spending time with them. “Thank you so much!” she said, cheerful and loving like she is on the show. “Please come back again. I’ll cook for you guys!”

Supposedly she called me a “cutie,” too, but I was too stressed to hear it, which is probably a good thing, because I think it would have made me crumble—like thinking of her southern cooking wasn’t enough, already.

“Phil,” I said, nervously, after hugging his wife, Miss Kay, “I feel like an idiot, but I left my voice recorder in Willie’s office.”

I breathed a sigh of relief, and looked over at John Godwin, simply known as “Godwin.” I recognized him. He looked like a walrus. Also, he got sprayed with a skunk one episode.

Turns out, Godwin let us into the warehouse, we found my recorder, and we all talked in the parking lot for a good 45 minutes beneath the Louisiana sky.

Godwin told us his story. He used to be a drunk. He used to avoid church because he didn’t want to be around “holy rollers.” Then someone invited him to a cookout, which, if you’ve seen Godwin, was an invitation he wasn’t going to decline. He always admired the Robertsons because he’s an avid hunter, and the Robertsons invented the Duck Commander duck call. At the cookout, however, Phil preached and Godwin’s life changed.

Now, Godwin practically is a Robertson. He’s on Duck Dynasty. He’s in their hunting DVDs. He has 100,000 Twitter followers and is a star. And yet, like the Robertsons, he’s very unassuming, very down-to-earth and genuine. It’s all about God, not himself. Through Godwin, you saw who the Robertsons really were. He was walking, talking proof of the impact the family has on people. He was changed.

As we left West Monroe, I was no longer stressed. I was happy I forgot my recorder, happy we talked to Godwin, and happy we got to know the Robertsons.

I fell asleep in the backseat, dreaming of Miss Kay’s cooking. And I was happy, happy, happy.

This column appeared in the March 2013 Sports Spectrum DigiMag and Volume 27, No. 2 print magazine. Stephen Copeland is a staff writer and columnist at Sports Spectrum magazine. His column tackles sports and faith from another angle, whether it’s humorous, personal or controversial. Follow him on Twitter-@steve_copeland or email him at stephen.copeland@sportsspectrum.com.