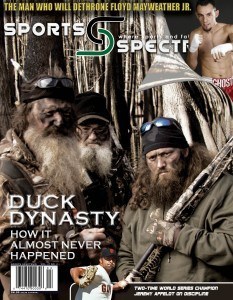 Sports Spectrum spent two hours with the Robertsons, America’s beloved redneck millionaires on A&E’s hit-program Duck Dynasty, in West Monroe, La., at the Duck Commander warehouse back in February, and we’re excited to give you an in-depth six-page feature about the Robertsons along with TONS of multimedia content. Sports Spectrum’s six-page feature on boxer Robert Guerrero chronicles one of the most incredible and inspirational stories in the sporting world, preparing you for his upcoming May 4 bout with Floyd Mayweather Jr.

We also have features on two-time World Series champion and San Francisco Giants pitcher Jeremy Affeldt, Pittsburgh Pirates manager Clint Hurdle, pro-snowboarders Andy Finch and Tommy Czeschin featured on The Amazing Race, future Hall of Famer Derrick Brooks, along with Sports Spectrum’s standard columns and daily sports-related Training Table devotional to encourage and challenge you in the most important facets of life. It’s an issue unlike any other, so view it early by logging in here.

Not a subscriber? Subscribe to Sports Spectrum today, and make our Duck Dynasty issue your first of 12 (four print, eight digital) issues this year!