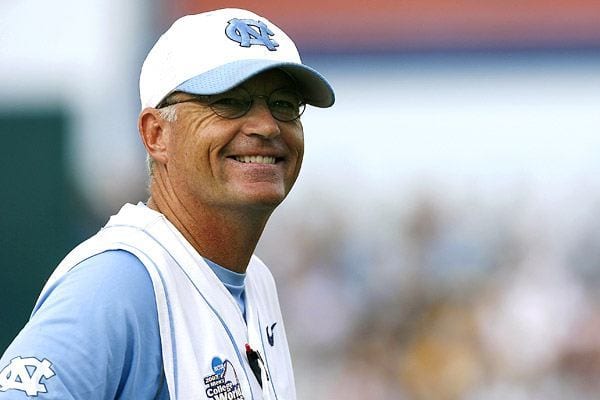 North Carolina was ranked No. 1 most of the season and is the No. 1 overall seed in the NCAA Baseball Tournament. 2013 was the first season since 1990 that North Carolina won both the ACC regular season and tournament titles in the same season. They open a Super Regional in Chapel Hill Friday. It’s a best-of-three series with South Carolina.

Every day Mike Fox awakes with two primary objectives in his coaching plan: getting the most out of his players on the field and instilling the most in his players for life.

For the past three years it’s worked out pretty well. Fox led the baseball team at the University of North Carolina on three consecutive trips to the College World Series in Omaha, Neb. Two of those trips concluded in the championship round. It’s extraordinary considering that North Carolina reached the CWS only four times in the previous 45 years before this run.

“Yeah, it’s definitely a bit surreal,” says Fox, who was the starting second baseman on the 1978 North Carolina squad that reached the CWS.

“To make it to Omaha three years in a row is, well, not impossible,” says Larry Gallo, North Carolina’s senior associate athletic director. “But for someone to do that is to be very, very successful.”

Success is something familiar to Fox. Before joining the Tar Heels 11 years ago, he coached for 16 years at North Carolina Wesleyan, where he led the Battling Bishops to the Division III World Series eight times, including to their first national title.

While Fox has earned whatever praise he receives, he says it’s all part of a grander plan.

“I don’t think there’s any question,” Fox says. “The Lord has had a plan for me.”

After dropping to his knees in his dorm room and crying out to Jesus Christ his sophomore year, in what he called one of the most powerful moments of his life, Fox’s entire life has been driven by his faith. He leads the Tar Heels in prayer before games, and directs any praise they receive where it only makes sense.

“I remember in 2006, especially after we won the regional and then again after the super regional, the first thing he did was bring us together and give the glory to God,” says senior catcher Mike McKee. “That was the most thrilling, awesome experience. It was unbelievable.”

And yet, Fox has never clashed with the school’s administration – or anyone else – despite the school being a secular university. There’s a certain appealing subtlety to Fox’s faith that enables him to lead the way he does.

“He portrays his faith in a very classy, non-ostentation fashion,” says Gallo.

All-American first baseman/outfielder Dustin Ackley adds, “He doesn’t overdo anything. He knows if he starts overdoing it, people stop listening.”

Plus, there’s way more to Fox’s faith-based leadership than merely praying before games.

“He’s a tireless worker,” says Gallo. “And he does things the right way. His character is beyond reproach.”

And it’s something Fox passes down to his players. He knows it’s more about getting the right players rather than the best ones, and he expects the same character from them that he exhibits in his own life.

“He’s a great recruiter,” says Ackley. “He’s told us about the past when he’s had guys with so much talent, but never came together as a team, and that’s why they couldn’t do what we’ve done. He finds the right guys.”

Same goes for his coaching staff, who Gallo credits along with Fox for much of North Carolina’s success. All three assistants – Scott Forbes, Scott Jackson, and Matt McCay – are also believers.

“We’re extremely committed not only to our professions, but our families and faith,” says Fox. “That’s special. I’m proud of that, and I think it helps us.”

“The bottom line is, it’s still just a game,” says Fox. “My impact on these players will last their lifetime, beyond a four-year period and 200 baseball games.”

“He’s a great coach,” says White. “But he’s more concerned with how he develops us as people than as baseball players. He always wants us to win, but it takes a back seat to his role as a leader and counselor.”

While Fox’s mission is to place his team in position to win, his passion is for their lives to change.

“When people leave here, they’re a different kind of person,” says Ackley. “That’s a part of his faith.”

Fox is OK with critics targeting him, because if he’s considered the bulls-eye then his players are in the clear.

“He cares about us as much as his own family,” says White.

“I don’t think Bryan should be sitting up here at this table,” said Fox to reporters in that post-game press conference. Fox then smothered other implicative grenades sportswriters lobbed at anyone other than himself.

Says Ackley, “That’s huge, having coaches take care of you, not leaving you out to dry in situations like that.”

But then, that’s all just part of the plan.

“I mean, it’s what Christ did,” Fox says, grinning and shrugging as if thinking, Like, how could I act any differently?

Brandon Sneed is a freelance writer who lives in Wilson, N.C. This story was published in the Spring 2009 issue of Sports Spectrum.