From the Archives -- Buck Williams 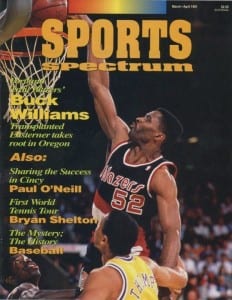 When 16th-century English theologian Richard Hooker said, “Change is not made without inconvenience, even from worse to better,” he didn’t know anything about NBA traders. But he did know something that Portland Trail Blazer forward Buck Williams has learned: The road to success is not always smooth. Sometimes it takes you through New Jersey. Kyle Rote Jr. caught up with the Blazers’ veteran to ask him how change has affect his life.

SS: There have been some dramatic changes in your life during the last few years. Foremost, of course, the trade from New Jersey to Portland. What’s your analysis of the change that occurred, and what were some of the difficulties in making the move out west?

BUCK: I played for Jersey for eight years. They were frustrating years. Yet I had a lot of personal achievement there–becoming an All-Star, All-Pro, and All-Defensive player. My Christian experience kept my boat anchored during my last three years in New Jersey. I had the privilege of being associated with a church called Redeeming Love Christian Center. And my faith really grew by leaps and bounds. A couple of verses in Romans that talk about how through adversity and hard times I should still be happy (Romans 5:3;4), helped me get through the whole ordeal.

SS: Right, it says, “rejoice in our sufferings.”

BUCK: Yeah, and that builds character. And character builds hope. My last few years in New Jersey, I held onto those verses. Everyone would always ask me, “Buck, how can you play so hard when you’re not going to win any games?” But through it all, I knew deep in my heart that I was becoming a better person–I was building character. I was also becoming a better basketball player because I was playing on a losing team, which forced me to go our and do more things to help the team.

Through this time, my spiritual life really grew and people began to see that there was something different about Buck Williams. I held very closely to my family and we all did a lot of praying. I stayed in the Bible. My close relationship with God encouraged me, and I began to feel hope.

Click here to read our story on the third pick in the 1981 draft, Buck Williams, from our March/April 1991 issue.