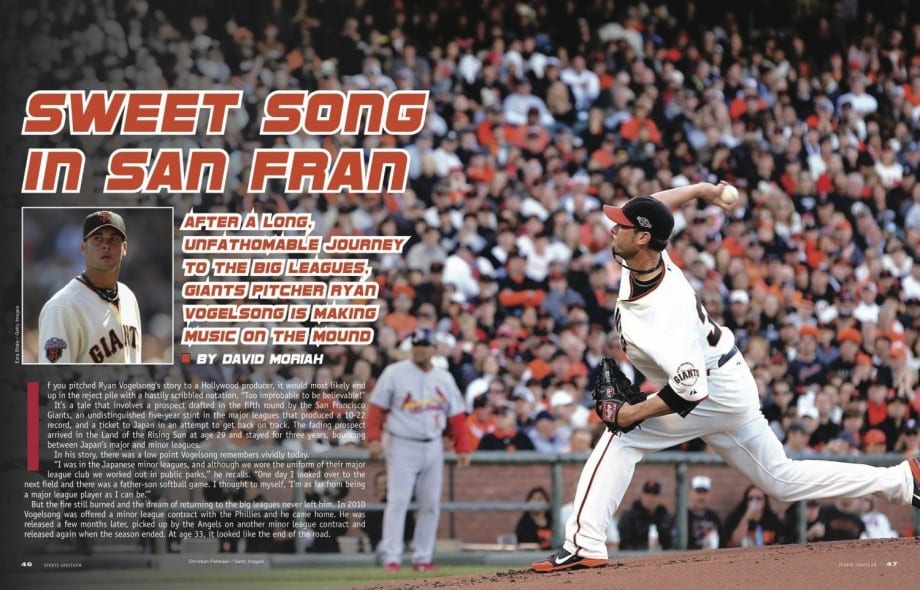 If you pitched Ryan Vogelsong’s story to a Hollywood producer, it would most likely end up in the reject pile with a hastily scribbled notation, “Too improbable to be believable!”

It’s a tale that involves a prospect drafted in the fifth round by the San Francisco Giants, an undistinguished five-year stint in the major leagues that produced a 10-22 record, and a ticket to Japan in an attempt to get back on track. The fading prospect arrived in the Land of the Rising Sun at age 29 and stayed for three years, bouncing between Japan’s major and minor leagues.

In his story, there was a low point Vogelsong remembers vividly today.

“I was in the Japanese minor leagues, and although we wore the uniform of their major league club we worked out in public parks,” he recalls. “One day I looked over to the next field and there was a father-son softball game. I thought to myself, ‘I’m as far from being a major league player as I can be.’”

But the fire still burned and the dream of returning to the big leagues never left him. In 2010 Vogelsong was offered a minor league contract with the Phillies and he came home. He was released a few months later, picked up by the Angels on another minor league contract and released again when the season ended. At age 33, it looked like the end of the road.

As if life for the struggling athlete couldn’t look any bleaker, his father-in-law developed serious heart problems and underwent two transplant surgeries. His wife, Nicole, had recently given birth to a son and Vogelsong was seriously questioning how he would provide for his family in the coming years.

“That’s when God became real to me,” Vogelsong confesses. “That’s when I really, really found out that I couldn’t do it on my own.”

Vogelsong doesn’t hesitate to quote the Bible verse that gave him strength in that moment, one he clings to today. James 1:12 says “Blessed is the one who perseveres under trial because, having stood the test, that person will receive the crown of life that the Lord has promised to those who love him.”

From that dark moment in the fall of 2010, fast-forward a mere two years to October 2012 and a chilly night in San Francisco and you will find Vogelsong in the midst of a jubilant celebration of the newly crowned World Series champion San Francisco Giants. Vogelsong had traveled a long road to that moment, but he persevered and his faith in the Lord hadn’t wavered. At last he could enjoy the ultimate reward for a Major League Baseball player—a World Series ring.

Vogelsong was not exactly a bit player in the Giants post-season success. He contributed important victories in each of the three rounds of National League Division Series, National League Championship Series, and finally on the big stage of the World Series. He started four post-season games, won three of them and posted a microscopic 1.09 earned run average in 24 2/3 innings. Twice he won games with his team facing elimination had they lost, and both times Vogelsong gave the Giants a do-or-die victory. 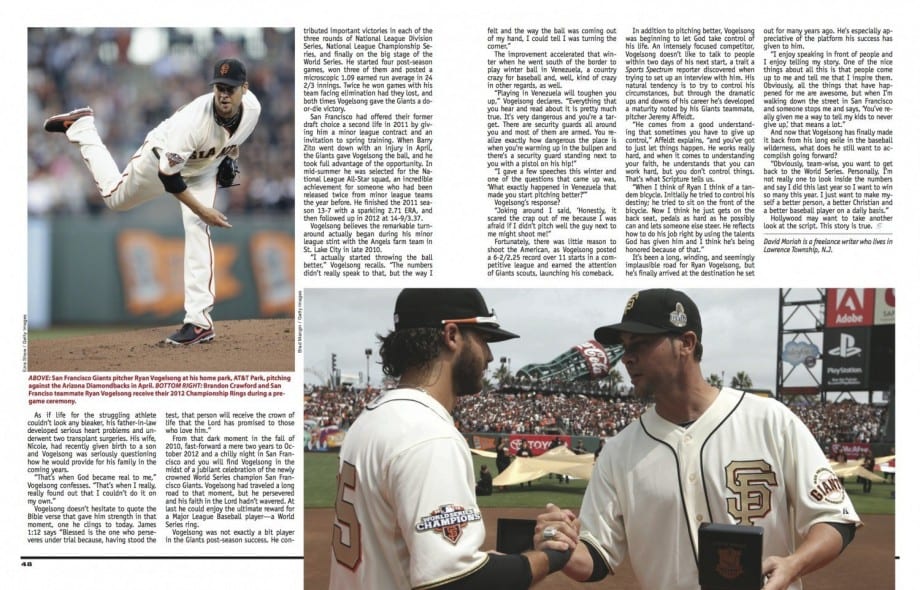 San Francisco had offered their former draft choice a second life in 2011 by giving him a minor league contract and an invitation to spring training. When Barry Zito went down with an injury in April, the Giants gave Vogelsong the ball, and he took full advantage of the opportunity. In mid-summer he was selected for the National League All-Star squad, an incredible achievement for someone who had been released twice from minor league teams the year before. He finished the 2011 season 13-7 with a sparkling 2.71 ERA, and then followed up in 2012 at 14-9/3.37.

Vogelsong believes the remarkable turn-around actually began during his minor league stint with the Angels farm team in St. Lake City in late 2010.

“I actually started throwing the ball better,” Vogelsong recalls. “The numbers didn’t really speak to that, but the way I felt and the way the ball was coming out of my hand, I could tell I was turning the corner.”

The improvement accelerated that winter when he went south of the border to play winter ball in Venezuela, a country crazy for baseball and, well, kind of crazy in other regards, as well.

“Playing in Venezuela will toughen you up,” Vogelsong declares. “Everything that you hear and read about it is pretty much true. It’s very dangerous and you’re a target. There are security guards all around you and most of them are armed. You realize exactly how dangerous the place is when you’re warming up in the bullpen and there’s a security guard standing next to you with a pistol on his hip!”

“I gave a few speeches this winter and one of the questions that came up was, ‘What exactly happened in Venezuela that made you start pitching better?’”

“Joking around I said, ‘Honestly, it scared the crap out of me because I was afraid if I didn’t pitch well the guy next to me might shoot me!”

Fortunately, there was little reason to shoot the American, as Vogelsong posted a 6-2/2.25 record over 11 starts in a competitive league and earned the attention of Giants scouts, launching his comeback.

In addition to pitching better, Vogelsong was beginning to let God take control of his life. An intensely focused competitor, Vogelsong doesn’t like to talk to people within two days of his next start, a trait a Sports Spectrum reporter discovered when trying to set up an interview with him. His natural tendency is to try to control his circumstances, but through the dramatic ups and downs of his career he’s developed a maturity noted by his Giants teammate, pitcher Jeremy Affeldt.

“He comes from a good understanding that sometimes you have to give up control,” Affeldt explains, “and you’ve got to just let things happen. He works really hard, and when it comes to understanding your faith, he understands that you can work hard, but you don’t control things. That’s what Scripture tells us.

“When I think of Ryan I think of a tandem bicycle. Initially he tried to control his destiny; he tried to sit on the front of the bicycle. Now I think he just gets on the back seat, pedals as hard as he possibly can and lets someone else steer. He reflects how to do his job right by using the talents God has given him and I think he’s being honored because of that.”

It’s been a long, winding, and seemingly implausible road for Ryan Vogelsong, but he’s finally arrived at the destination he set out for many years ago. He’s especially appreciative of the platform his success has given to him.

“I enjoy speaking in front of people and I enjoy telling my story. One of the nice things about all this is that people come up to me and tell me that I inspire them. Obviously, all the things that have happened for me are awesome, but when I’m walking down the street in San Francisco and someone stops me and says, ‘You’ve really given me a way to tell my kids to never give up,’ that means a lot.”

And now that Vogelsong has finally made it back from his long exile in the baseball wilderness, what does he still want to accomplish going forward?

“Obviously, team-wise, you want to get back to the World Series. Personally, I’m not really one to look inside the numbers and say I did this last year so I want to win so many this year. I just want to make myself a better person, a better Christian and a better baseball player on a daily basis.”

Hollywood may want to take another look at the script. This story is true.