From the Archives -- The Smut Stops Here 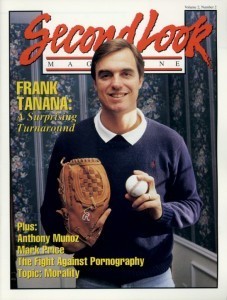 It takes guts to man the line of scrimmage, face mask to face mask with some of the nastiest 300-pound plus defensive linemen in the National Football League. (Of course, it’s not so bad when you’re 6-foot-6 and 278 pounds yourself.) It also takes guts to stand up for your convictions — especially when you risk being misunderstood.

Give Anthony Munoz an “A” for intestinal fortitude on both counts. The Cincinnati Bengals offensive tackle has been voted to the Pro Bowl seven times and has been recognized twice as the NFL’s best offensive lineman. The 30-year-old Munoz has also developed the courage to take on moral issues. One that concerns him is the pervasiveness of pornography — an issue he admits he has not always been sensitized toward.

Just before his senior year at the University of Southern California, Munoz was named to a pre-season All-American team — by Playboy magazine. The perks included a photograph in Playboy with more than 40 other top college football players, and a weekend at a resort.

At that point in Anthony’s life, it was a significant achievement. “It was a great honor to be named with the top athletes in the country,” he says, especially since injuries had sidelined him for a chunk of his college career. He agreed to participate.

But the story doesn’t end there. Munoz received another call from Playboy in 1986…