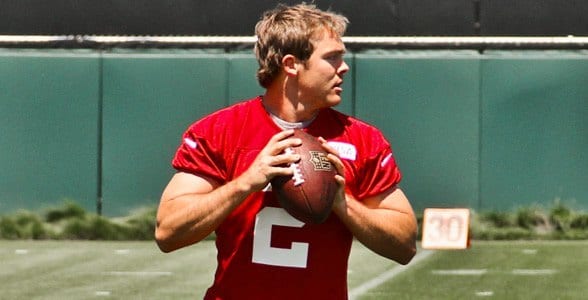 Bryce is joined by former star quarterback at Texas, and current backup quarterback for the San Francisco 49ers, Colt McCoy. Drafted by the Cleveland Browns in 2010, McCoy was traded in April to the 49ers. He has also co-authored a new book called, The Real Win: A Man’s Quest for Authentic Success. Listen as Colt McCoy candidly unpacks his life. Click here to listen to Bryce’s full interview with Colt McCoy

BRYCE JOHNSON: I’m sure San Francisco is a little bit different than Cleveland, huh?
COLT MCCOY: Yeah, a little bit different. The weather is different, the climate is different. I enjoyed my time in Cleveland, there in Ohio, but God has new plans for me now, and I’m really enjoying getting to know my new teammates and my new coaches, and it’s a new place. So there are lots of positives going on right now.

BRYCE JOHNSON: I saw on Twitter that you preached about leaving a legacy. I’m curious what were your main points in that sermon you spoke on?
COLT MCCOY: Yeah, I was fortunate enough Matt Carter—he’s the pastor here at Austin Stone (Community Church)…we wrote the book together (The Real Win)…he’s an unbelievable guy, unbelievable preacher, and he’s done so much for me, and he asked me to come and do a sermon on legacy. The first thing that came to my mind was what I think about when I think about legacy—that every man is going to leave one, and my point is if we all know that we’re going to leave a legacy, what kind of legacy are we leaving and what kind of legacy would our friends that we’re around every day say that we’re leaving? What kind of legacy would my wife say that I’m leaving? When I thought of it, you know I’m kind of young in life—I still consider myself young—I’m 25, but I know each and every day that I’m building a legacy. What am I building? What am I leaving to the people I’m around? A lot of time when we think about legacy, we think about what we’re doing in life, how we’re going to set up our business, how we’re going to have a successful golf game, you know, have a big fat 401-K. We’ve got a lot of these things, these roaming material things on our minds, but at the end of the day is that really going to matter? At the end of the day what is going to really matter is what you’ve done in this life for Jesus.

BRYCE JOHNSON: Amen!
COLT MCCOY:  That’s really the point I wanted to get across in that message, so I think it went well.

BRYCE JOHNSON: Has being an NFL quarterback been everything that you thought it would be?
COLT MCCOY: Man, there are so many ups and downs and bumps along the way, but you know it’s a challenge every day. I still try to make myself enjoy football. I loved playing it at a very young age, and now that it’s your work, and it’s your business, and it’s your career, sometimes that kind of gets washed up. Sometimes you make it more than what it really is, and for me I just try to enjoy it every day. I work hard, I compete, I’m a very competitive person, but I still love the game, and I’m going to keep playing it as long as I can because God has blessed me to be able to do it. You asked me if it’s everything I thought it would be. There’s probably a lot more than I could never imagine, but it’s been good.