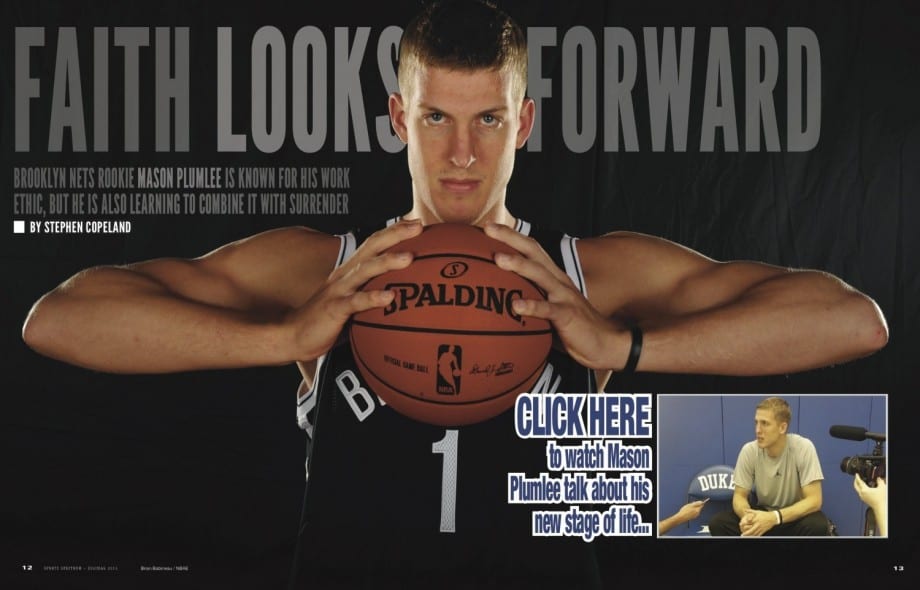 Mason Plumlee looks out over the floor at Duke University’s practice facility.

It must be weird to be back—returning to campus, his home for the last four years; visiting Cameron Indoor, Duke’s 2010 national championship banner hanging in the rafters of its gymnasium that feels more like a cathedral, with its wooden steeple doors and castle-stone exterior; and sitting here in Duke’s practice facility where his new team, the Brooklyn Nets, are having training camp.

This facility—the two courts in front of him and the weight room to his left—is where he became the player he is today, where he emerged as one of the most dominant big men in college basketball, and where he developed into a first-round draft pick in 2013 by the Brooklyn Nets.

“I would be in here shooting 500 free throws a day,” he says, looking at the courts in front of him. “Because I was one of the worst free-throw shooters in the country,” he laughs.

It was practicing free throws on Duke’s practice courts that taught Mason a valuable lesson, not just about basketball, but about life.

After shooting 50 percent from the line his first three seasons at Duke and often being subbed out at the end of games, Mason improved to a 70-percent free-throw shooter his senior season. He was resilient in his pursuit, which his mother, Leslie, says is one of his most admirable traits. Mason, having worked hard, then learned to rest in the assurance he had given his all.

“You can make things happen to an extent, but eventually you have to turn it over to God,” Mason says. “If you are stuck in a situation, if you are having problems, sometimes the best thing to do is just take a step back instead of beating your head on a wall, trying to get through the wall.

“I was beating my head and beating my head, and eventually, I was like, ‘You know what? I’m putting the reps up. I just need to take a step back, take a deep breath, and put it in His hands.’” 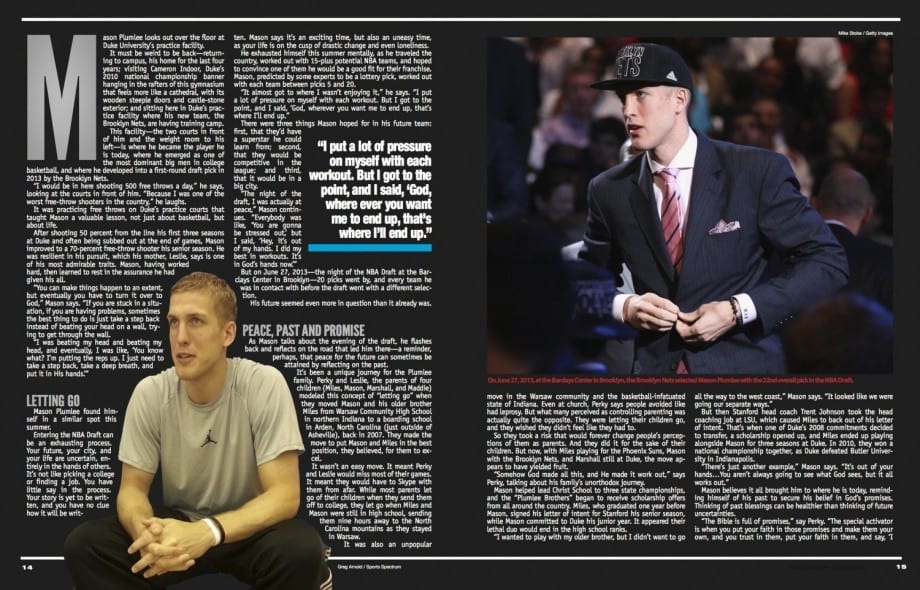 Mason Plumlee found himself in a similar spot this summer.

Entering the NBA Draft can be an exhausting process. Your future, your city, and your life are uncertain, entirely in the hands of others. It’s not like picking a college or finding a job. You have little say in the process. Your story is yet to be written, and you have no clue how it will be written. Mason says it’s an exciting time, but also an uneasy time, as your life is on the cusp of drastic change and even loneliness.

He exhausted himself this summer mentally, as he traveled the country, worked out with 15-plus potential NBA teams, and hoped to convince one of them he would be a good fit for their franchise. Mason, predicted by some experts to be a lottery pick, worked out with each team between picks 5 and 20.

“It almost got to where I wasn’t enjoying it,” he says. “I put a lot of pressure on myself with each workout. But I got to the point, and I said, ‘God, wherever you want me to end up, that’s where I’ll end up.”

There were three things Mason hoped for in his future team: first, that they’d have a superstar he could learn from; second, that they would be competitive in the league; and third, that it would be in a big city.

“The night of the draft, I was actually at peace,” Mason continues. “Everybody was like, ‘You are gonna be stressed out,’ but I said, ‘Hey, it’s out of my hands. I did my best in workouts. It’s in God’s hands now.’”

But on June 27, 2013—the night of the NBA Draft at the Barclays Center in Brooklyn—20 picks went by, and every team he was in contact with before the draft went with a different selection.

His future seemed even more in question than it already was. 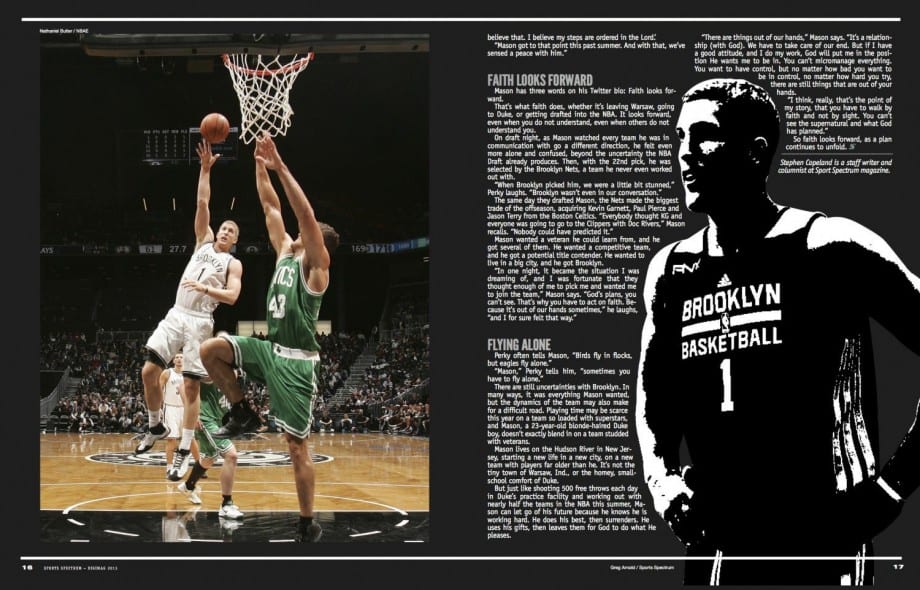 Peace, Past and Promise

As Mason talks about the evening of the draft, he flashes back and reflects on the road that led him there—a reminder, perhaps, that peace for the future can sometimes be attained by reflecting on the past.

It’s been a unique journey for the Plumlee family. Perky and Leslie, the parents of four children (Miles, Mason, Marshall, and Maddie) modeled this concept of “letting go” when they moved Mason and his older brother Miles from Warsaw Community High School in northern Indiana to a boarding school in Arden, North Carolina (just outside of Asheville), back in 2007. They made the move to put Mason and Miles in the best position, they believed, for them to excel.

It wasn’t an easy move. It meant Perky and Leslie would miss most of their games. It meant they would have to Skype with them from afar. While most parents let go of their children when they send them off to college, they let go when Miles and Mason were still in high school, sending them nine hours away to the North Carolina mountains as they stayed in Warsaw.

It was also an unpopular move in the Warsaw community and the basketball-infatuated state of Indiana. Even at church, Perky says people avoided him like he had leprosy. But what many perceived as controlling parenting was actually quite the opposite. They were letting their children go, and they wished they didn’t feel like they had to.

So they took a risk that would forever change people’s perceptions of them as parents. And they did it for the sake of their children. But now, with Miles playing for the Phoenix Suns, Mason with the Brooklyn Nets, and Marshall still at Duke, the move appears to have yielded fruit.

“Somehow God made all this, and He made it work out,” says Perky, talking about his family’s unorthodox journey.

Mason helped lead Christ School to three state championships, and the “Plumlee Brothers” began to receive scholarship offers from all around the country. Miles, who graduated one year before Mason, signed his letter of intent for Stanford his senior season, while Mason committed to Duke his junior year. It appeared their lethal duo would end in the high school ranks.

“I wanted to play with my older brother, but I didn’t want to go all the way to the west coast,” Mason says. “It looked like we were going our separate ways.”

But then Stanford head coach Trent Johnson took the head coaching job at LSU, which caused Miles to back out of his letter of intent. That’s when one of Duke’s 2008 commitments decided to transfer, a scholarship opened up, and Miles ended up playing alongside Mason for three seasons at Duke. In 2010, they won a national championship together, as Duke defeated Butler University in Indianapolis.

“There’s just another example,” Mason says. “It’s out of your hands…You aren’t always going to see what God sees, but it all works out.”

Mason believes it all brought him to where he is today, reminding himself of his past to secure his belief in God’s promises. Thinking of past blessings can be healthier than thinking of future uncertainties.

“Mason got to that point this past summer. And with that, we’ve sensed a peace with him.”

On draft night, as Mason watched every team he was in communication with go a different direction, he felt even more alone and confused, beyond the uncertainty the NBA Draft already produces. Then, with the 22nd pick, he was selected by the Brooklyn Nets, a team he never even worked out with.

“When Brooklyn picked him, we were a little bit stunned,” Perky laughs. “Brooklyn wasn’t even in our conversation.”

The same day they drafted Mason, the Nets made the biggest trade of the offseason, acquiring Kevin Garnett, Paul Pierce and Jason Terry from the Boston Celtics. “Everybody thought KG and everyone was going to go to the Clippers with Doc Rivers,” Mason recalls. “Nobody could have predicted it.”

“In one night, it became the situation I was dreaming of, and I was fortunate that they thought enough of me to pick me and wanted me to join the team,” Mason says. “God’s plans, you can’t see. That’s why you have to act on faith. Because it’s out of our hands sometimes,” he laughs, “and I for sure felt that way.”

“Mason,” Perky tells him, “sometimes you have to fly alone.”

There are still uncertainties with Brooklyn. In many ways, it was everything Mason wanted, but the dynamics of the team may also make for a difficult road. Playing time may be scarce this year on a team so loaded with superstars, and Mason, a 23-year-old blonde-haired Duke boy, doesn’t exactly blend in on a team studded with veterans.

Mason lives on the Hudson River in New Jersey, starting a new life in a new city, on a new team with players far older than he. It’s not the tiny town of Warsaw, Ind., or the homey, small-school comfort of Duke.

But just like shooting 500 free throws each day in Duke’s practice facility and working out with nearly half the teams in the NBA this summer, Mason can let go of his future because he knows he is working hard. He does his best, then surrenders. He uses his gifts, then leaves them for God to do what He pleases.

“There are things out of our hands,” Mason says. “It’s a relationship (with God). We have to take care of our end. But if I have a good attitude, and I do my work, God will put me in the position He wants me to be in. You can’t micromanage everything. You want to have control, but no matter how bad you want to be in control, no matter how hard you try, there are still things that are out of your hands.

“I think, really, that’s the point of my story, that you have to walk by faith and not by sight. You can’t see the supernatural and what God has planned.”

So faith looks forward, as a plan continues to unfold.