From Puppet to Platform 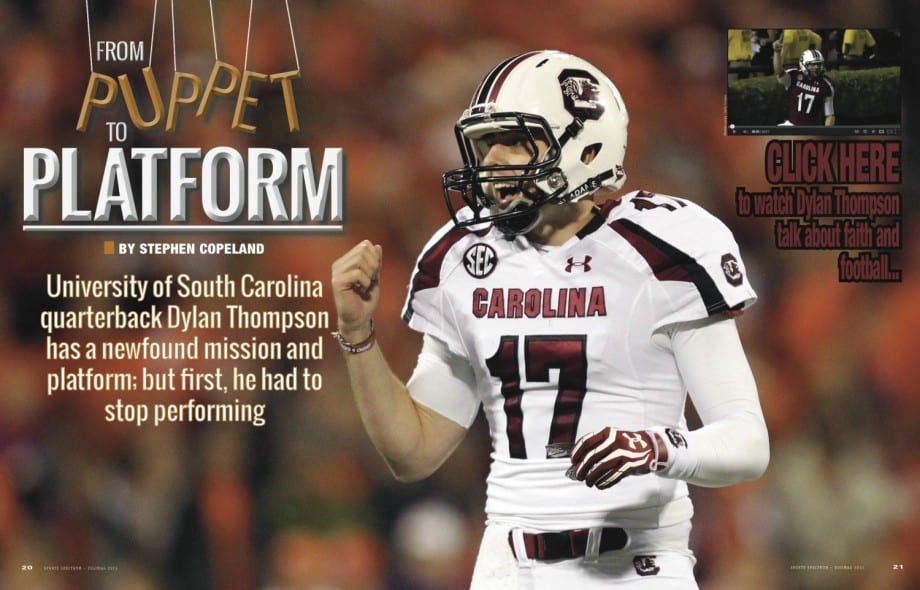 He moved the right way. He said the right things. He danced across the stage and nailed his lines. He was a shell of a man, a marionette that moved but had no life inside.

One day, the strings broke, his body fell, and he lay all twisted up and lifeless on stage.

The lights went down. And the curtains closed.

He fit the mold perfectly.

It was his athletic ability and Tebow-like charisma that propelled him into the South Carolina spotlight. A two-sport star at Boiling Springs, Thompson was practically offered a basketball scholarship from Louisiana Tech as a freshman; and he later received a football scholarship to play quarterback at the University of South Carolina. Gamecocks head coach Steve Spurrier was so set on Thompson, he recruited him personally.

“I saw leadership qualities in him when he was in high school,” says his home pastor at Boiling Springs Baptist Church, Hank Williams. “I told him, ‘You’ve been given a lot—naturally a nice-looking guy, nice athletic abilities, naturally born leader—but there are also requirements of that. To whom much is given, much is required.”

Perhaps he was given so much he wasn’t sure what to do with it all. His success and popularity not only made him the pride of Boiling Springs but also the rallying cry of Christians.

“People, I guess, wanted to throw a Tim Tebow label on me just because I happened to play quarterback and was a Christian that went to church,” Thompson says.

Thompson also played into it. He was a good kid. He went to church. He even brought people to church. He did the right things. But it was more like a dance on a stage.

“I could put on that show,” Thompson says. “And every time I had an interview, I would thank God and this and that…just because I heard people say it.”

Thompson was a caricature, an exaggerated representation of what people wanted him to represent, controlled by strings of enslaving expectations and religious perceptions.

So he kept performing. 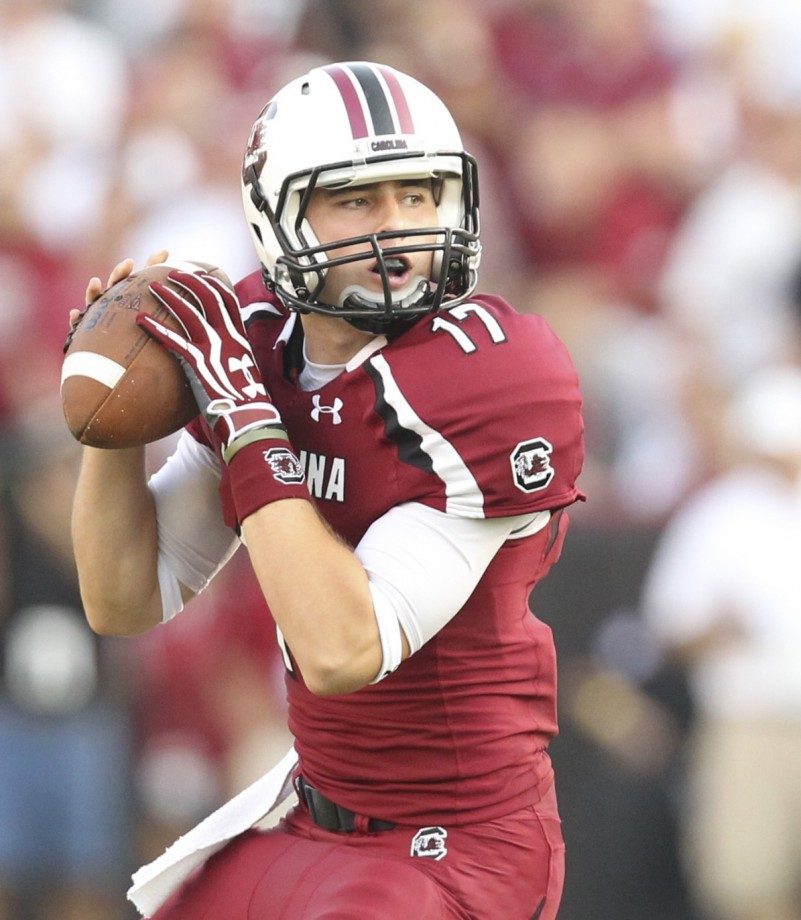 Thompson says pride was bursting from within.

His goal in high school was to receive a college scholarship and eventually play in the NBA or NFL. In ninth grade, he had already accomplished his scholarship dreams with an offer from Louisiana Tech. And when Spurrier came along with a football scholarship, it only got better. He was chasing importance. He found freedom in status.

“I remember being really arrogant inwardly and prideful in my heart,” Thompson says. “Nobody on the outside could tell. They just thought I was the same good kid that did everything right.”

When he stepped on campus at the University of South Carolina, his importance changed. His first three days on campus, Thompson says Spurrier didn’t say a word to him. One thing became clear: Things would be much different at USC. He was no longer in Boiling Springs. His importance was stripped.

Thompson would end up redshirting his freshman year, and for the first time in his athletic career, he could blend in. He didn’t have to perform anymore because no one knew who he was.

He could be himself.

The problem is that he didn’t like who he was.

Thompson’s freshman year can be described as an ongoing quest for freedom. He cut the strings that pulled him up and down, to and fro, and made him act a certain way. He murdered the marionette.

He started drinking and going downtown and having sex. He lusted over the day when he’d be on the front page of the newspaper in a Gamecock uniform, and he wanted every pretty girl. All through the winter and all through the spring, he did whatever he wanted. Whatever felt right, he did.

It was there, however, he felt his body crumble and fold and melt beneath him, thumping the stage and echoing throughout an empty theater. It was there, strings detached, he realized the extent of his puppet-being.

In high school, he realized he had strings. But in college, he understood the saddest thing about being puppet: There’s nothing living inside you.

He lay all twisted and lifeless on stage.

The lights went down. The curtains closed. 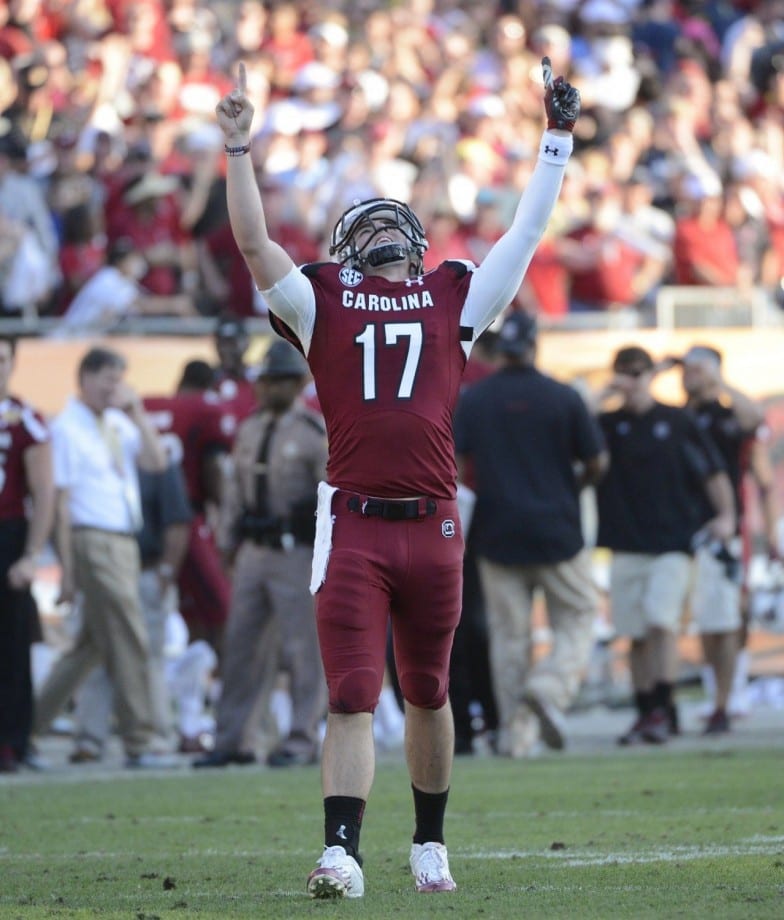 He had gone to church in Columbia that Sunday and heard a message about Matthew 7:21, “Not everyone who says to me, ‘Lord, Lord,’ will enter the kingdom of heaven, but only the one who does the will of my Father who is in heaven,” and it blasted his heart back to life like a defibrillator.

Back into a slow, weak beat.

“I was still putting random things on Facebook about how God is good, this and that,” Thompson says of his freshman year. “But in life, I was lost. That verse really struck me, and I went back to my dorm and just got caught up in my sin, really. It was like God was showing me my sin in front of me and what He wanted to bring me out of.”

It felt as if every situation in his jaded past was fusing together and culminating in that moment, there in his dorm room. “I just realized, ‘All my life is happening right now, and it’s a complete waste of what God wants in my life.’”

Thompson had what can only be described as a “fear for the Lord.” And he called his pastor from home in a panic.

“I knew by the sound of his voice something was up,” says Hank Williams. “He was emotional. He had faced a couple of crisis situations—crisis from experience and crisis of belief, I think. God had just used some things to really challenge him and call him out and ask: Are you just a name, or are you real?”

“He was humbled. He was absolutely humbled. He had felt the gravitational pull of the world, and he was convicted about it. He felt guilty about it…A lot of kids would have said, ‘Hey, this is college; it’s part of it; I’ll get serious with God after I get out of college.’ But he wasn’t that way. He was very sincere and genuine and recognized that this was a serious time in his life, that if he didn’t make some changes and get serious about who Jesus was to him, he was going to mess up his life.”

Jesus held Thompson’s hand, and they broke through the brick wall. It may have been a fear of God that shocked his heart, that awakened him, but it was the grace of God that made his heart fall in love, that brought him to life.

He murdered the marionette and found freedom—true freedom that only comes from within, from a God who loved him, a Savior who demonstrated it, and a Spirit that wanted to live through him…that brought him to life.

One month after his conversion, he was asked by the team chaplain to lead a Bible study. Considering he had hardly ever read the Bible, Thompson was hesitant. But he agreed anyway. He dove into the Scriptures. It started with six people. By fall of 2012, it had 28 people.

In the 2012-13 season, after getting limited time his sophomore season, he finally got his shot on the field and started splitting time at quarterback with Connor Shaw, captivating Gamecock Nation with his strong arm and accurate passing. He led USC to victories over East Carolina and Clemson and threw the game-winning pass in the Outback Bowl against Michigan. He passed for more than 1,000 yards and 10 touchdowns.

Needless to say, after 2012, every USC fan knows the name “Dylan Thompson.” And they’ll be hearing a lot more of him this season.

Thompson always had leadership traits. But his platform as a leader changed as he provided the person. There was transparency instead of a show, humility instead of pride. Ten minutes into his interview with Sports Spectrum, Thompson was launching into his testimony, sharing specific sins with a reporter he hardly knew.

Dylan Thompson is all of us.

“David, in the Old Testament, had some crash and burn moments,” Williams says. “But the Bible calls him a man after God’s own heart…I think one of the most endearing qualities about David was that he had genuine humility. David said to Saul, ‘Your servant will go and fight. I’m your servant, Saul.’ There was genuine humility in David that God really smiled on and loved. He knew that David would give God the glory. When he defeated Goliath, he said, ‘The Lord delivered you.’”

“I see that in Dylan. He has genuine humility. And that’s rare. That’s unusual. It’s not a put-on. It’s not false humility. It is genuinely a recognition that he can’t do anything without the Lord, but he can do all things through Christ who strengthens him.”

There are a lot of puppets in this world, non-believers and believers who get pulled up and down, to and fro by the strings of their body and soul, not recognizing a Spirit lives inside.

“He talks to his teammates, and he tells them it’s not about trying to cuss less,” Easterby says. “It’s about God being consumed in your heart…And I think the transition of one’s heart will transition one’s priorities.”

Your spirit brings life to your soul and body from within; but without it, your body and soul restlessly compensate, work, and search for life and freedom outside of your God-breathed core.

Christ lives in you.

“It was all about realizing who He was.”

Stephen Copeland is a staff writer and columnist at Sport Spectrum magazine. This story was published in the August 2013 Sports Spectrum DigiMag. Print and digital subscribers, log in here to view. Not a subscriber to Sports Spectrum? Subscribe here.