From the Archives -- Favorite Sun in Phoenix 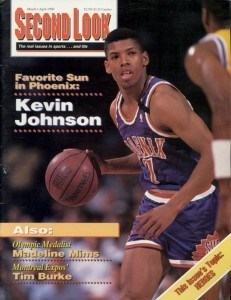 SS: I understand that you really enjoy reading. Since you have sampled the insights of some of the great authors and poets of the world, perhaps your heroes weren’t athletic as much as they were literary.

KEVIN JOHNSON: As I got a little bit older I was more interested in education. I was really attracted to Henry David Thoreau, because he was a non-conformist. He did whatever he believed was right, as long as it wasn’t going to hurt anybody else. That thought really stayed with me — that you do have to be different. So, to a certain extent I admired Thoreau.

SS: But you continued your search, still trying to find some sense of real truth and purpose. Eventually you came across the New Testament, in which you found a literary piece that had a different impact on your life than the other great authors you had read.

KEVIN JOHNSON: That’s right. I was searching for someone I could be like, that I could emulate in almost every way: their thought processes, how they treated other people, and so forth. As I would get into these different characters, whether from literature, sports, or people I knew, they would always fall short of my expectations somewhere along the line.

When I finally came across the New Testament, I read it from front to back. I had never read the Bible before. I wasn’t even a very religious person, but my search ended right there. This book had Jesus Christ as the central figure, and in the whole book He never contradicted Himself nor was He hypocritical. I thought that was so awesome! For once, I had an example I could follow and really believe in.

Read the remainder of Kevin Johnson’s interview with Sports Spectrum in our March/April 1990 issue by clicking here.