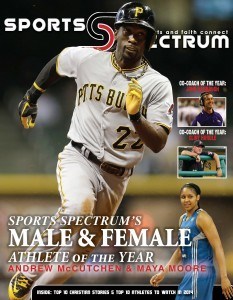 Our January 2014 DigiMag is a look back at 2013 and a preparation for 2014. This issue features an exclusive interview and in-depth feature with Sports Spectrum Male Athlete of the Year and National League MVP Andrew McCutchen along with the rest of our lists and awards for 2013. Our columns also touch on a variety of issues. Managing editor Brett Honeycutt writes about what he did to preserve the baseball memories he had with his father in his column “Airing It Out,” and staff writer Stephen Copeland writes about his interview with tight-rope extraordinaire Nik Wallenda and what his 2013 Grand Canyon walk can teach us about life in his column “Another Angle.”