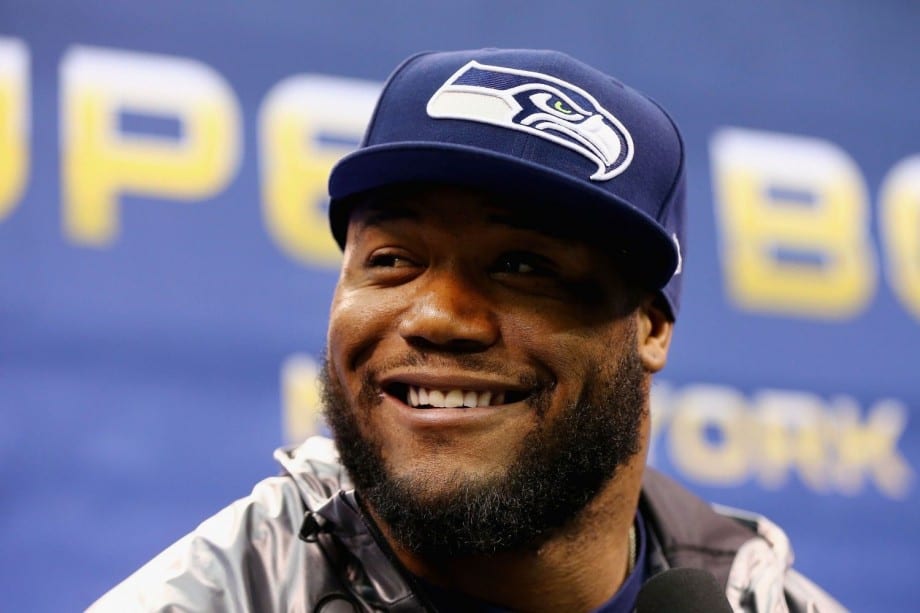 All were part of a whirlwind of bad news for Seattle Seahawks fullback Michael Robinson.

And though the seeming chaos would likely have been too much to handle for most, Robinson never feared in the midst of his trial.

Jump back to the morning of August 17, just before Seattle was to host a preseason game against the Denver Broncos, the same Super Bowl XLVIII opponent of the Seahawks.

Robinson had been taking Indocin, an anti-inflammatory medication prescribed by the team, when he says he began feeling dehydrated. That, coupled with oncoming sickness, led to near liver and kidney failure.

He lost weight and missed several weeks of practice.

From there, Robinson’s news got worse – Seattle released him on Aug. 31.

Sick, weak and without a job, Robinson had to think about recovering and gaining back the more than 30 pounds he lost (he dropped from 245 pounds to 212 pounds) before he could think about playing again – for any team.

“I went to the hospital three separate times,” he said during the week of the Super Bowl. “Two times they sent me home and just told me to keep getting fluids. I went two weeks without eating, so I lost a lot of weight.”

On the third time to the hospital, they figured it out.

“(The doctors) hadn’t seen anything like this,” he said. “Then, once we brought the liver specialist in and the kidney specialist in, they had seen these types of reactions before and they were all over it.”

Slowly, he regained his strength and weight, and later visited the Tennessee Titans and New York Giants, but circumstances brought him back to Seattle, which signed him on Oct. 22 when his replacement, Derrick Coleman, went down with a hamstring injury.

Before being signed, thoughts of playing in the Super Bowl didn’t even cross his mind because he quietly wondered if he would ever play football again – for any team.

“I didn’t fear it, but yeah I did think about it. I definitely didn’t fear it because football doesn’t define me. I think that’s the big problem with players in this league. When they try and transition out of this game, football defines them. They don’t know what else to do. I encourage younger players all the time in the offseason to think of this offseason as if you’ve played your last season. What are you going to do? Get involved in other things. Have a drive, have a motive to get up in the morning other than football.”

Many saw the tears he shed after the Seahawks won the NFC Championship against their rivals, the San Francisco 49ers and he’s been asked about them quite a bit.

“I’ve gotten a lot of questions about me crying and all that type of stuff, but it was just I had a long year being cut, being sick, not really realizing the extent of the sickness,” he said during the week leading up to the Super Bowl. “I didn’t know that my kidneys were failing and my liver was failing. I had no idea. I just thought I was getting a bug. But again, hindsight is 20/20 and I’m glad I’m here now. I’ve got my weight back, got my strength back, and it was an opportunity to come back (to Seattle) and I’m glad it opened up.”

It was tough, though, coming back to a team that had cut him, but he also understood the business side of the team’s decision.

“I wrestle with it, but it was easy when I looked at my relationship with the guys on the team,” he said during the week of the Super Bowl. “That’s why you play this game, and I feel like a big reason why we’re here is that every man in that locker room thinks the same way. We all play because of the guy next to you. You all perform because the guy next to you is counting on you. Peer accountability, the biggest thing is accountability, so that’s what we try to do.”

“I got released because I was sick early in training camp. It’s the business of the National Football League. If you can’t put a product on the field, you can’t be on the team. It’s definitely gratifying to be back here with the team and in the Super Bowl.”

Brett Honeycutt is the managing editor of Sports Spectrum magazine. This article was published in the February 2014 DigiMag.