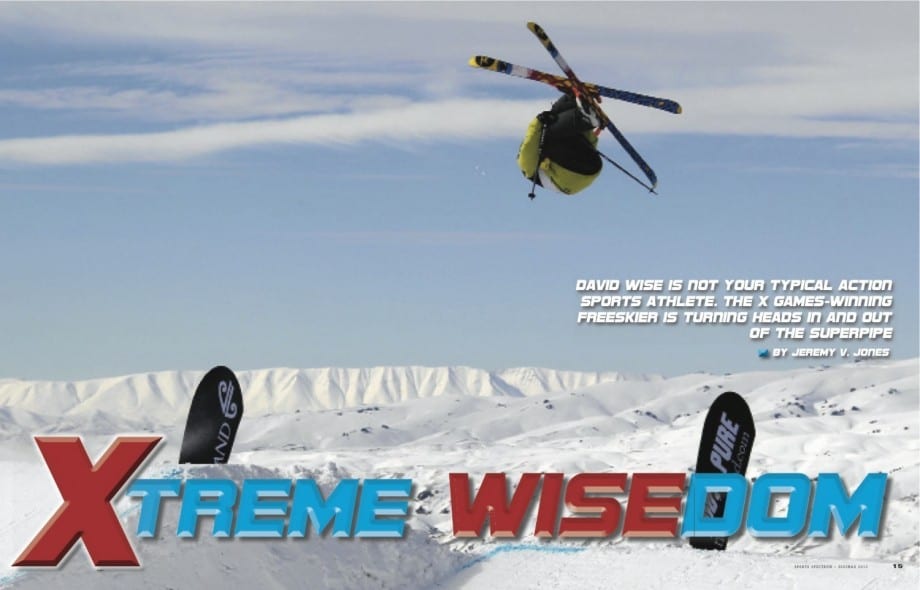 David Wise stood on deck at the top of the superpipe in Aspen, Colo. Before him stretched the perfectly groomed ice and snow tube carved 567 feet long into the mountainside. As he mentally prepared, Wise watched competitor Justin Dorey smash into the lip in what ESPN called “one of the gnarliest crashes in years.” (Thankfully, Dorey walked away with only an injured shoulder.) It wasn’t the kind of precursor you want before beginning your own high-speed attempt at defying gravity in a giant geographic playground.

But it wasn’t just another run. This was the 2012 Winter X Games finals, the snowy epicenter of the action sports world. And Wise was poised to claim the biggest victory of his freeskiing career. He pointed his skis, picked up speed and dropped into the pipe—backwards. He rocketed down one 22-foot wall, across the floor of the superpipe and up the other near-vertical wall, launching himself into three end-over-end rotations—think flips turned on a diagonal axis. In other words, picture throwing a coffee mug into the air and watching it wobble around rather than flip straight over. Wise was the human coffee mug with fiberglass skis on both feet, spinning around and around 20 feet in the air over the top of the pipe, 42 feet above its bottom. His landing target was the vertical wall. His switch double flip was flawless.

And that was only the beginning. Wise’s height out of the pipe, or amplitude in X-speak, was three feet higher than the other skiers’ average. And he capped his stellar run with a huge double cork 1260 with a mute grab—three and a half diagonal flips while holding a ski with one hand.

The impressive performance secured X Games gold. The victory was the beginning of a breakout 2012 season that also included wins at the next two major contests: the Dew Tour in Snowbasin, Utah, and the U.S. Grand Prix in Mammoth, Calif. And the season positioned Wise as a favorite heading into the Olympic qualifying year before the 2014 Games in Sochi, Russia.

But before America starts chanting his name in unison, there’s something you need to know about David Wise: He’s not your typical action sports star.

Yes, he loves amplitude and hucking big tricks—he was the first skier to land a double cork 1260 in the halfpipe. Yes, he’s young—though at 21 he was the oldest on the Winter X Games podium in 2012. And yes, he is sponsored by an energy food and drink company.

But Wise is also a husband and father who eschews any of the industry’s arrogant swagger. His image is bouncing his toddler, Nayeli, and leading the youth group at his church back home in Reno rather than partying with the snow sports elite. It’s a difference that the action sports media has quickly noted. Wise humbly views it all as part of who God has and continues to make him.

“Skiing is my art,” Wise says. “It’s the skill, the talents and opportunities that God has given me to show the world what I think skiing should look like and what I think beauty is. Skiing is my way of worshiping.” 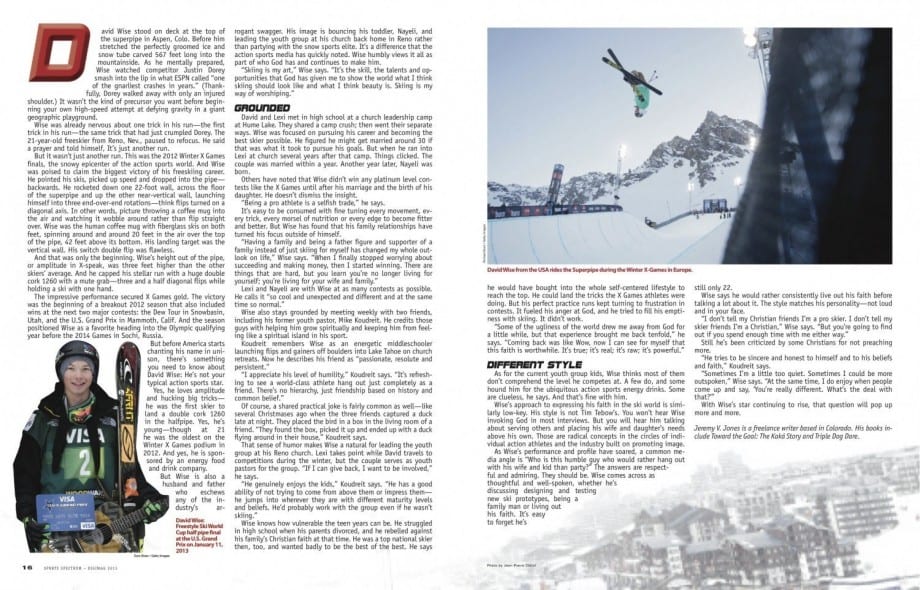 David and Lexi met in high school at a church leadership camp at Hume Lake. They shared a camp crush; then went their separate ways. Wise was focused on pursuing his career and becoming the best skier possible. He figured he might get married around 30 if that was what it took to pursue his goals. But when he ran into Lexi at church several years after that camp. Things clicked. The couple was married within a year. Another year later, Nayeli was born.

Others have noted that Wise didn’t win any platinum level contests like the X Games until after his marriage and the birth of his daughter. He doesn’t dismiss the insight.

“Being a pro athlete is a selfish trade,” he says.

It’s easy to be consumed with fine tuning every movement, every trick, every morsel of nutrition or every edge to become fitter and better. But Wise has found that his family relationships have turned his focus outside of himself.

“Having a family and being a father figure and supporter of a family instead of just skiing for myself has changed my whole outlook on life,” Wise says. “When I finally stopped worrying about succeeding and making money, then I started winning. There are things that are hard, but you learn you’re no longer living for yourself; you’re living for your wife and family.”

Lexi and Nayeli are with Wise at as many contests as possible. He calls it “so cool and unexpected and different and at the same time so normal.”

Wise also stays grounded by meeting weekly with two friends, including his former youth pastor, Mike Koudreit. He credits those guys with helping him grow spiritually and keeping him from feeling like a spiritual island in his sport.

Koudreit remembers Wise as an energetic middleschooler launching flips and gainers off boulders into Lake Tahoe on church retreats. Now he describes his friend as “passionate, resolute and persistent.”

“I appreciate his level of humility,” Koudreit says. “It’s refreshing to see a world-class athlete hang out just completely as a friend. There’s no hierarchy, just friendship based on history and common belief.”

Of course, a shared practical joke is fairly common as well—like several Christmases ago when the three friends captured a duck late at night. They placed the bird in a box in the living room of a friend. “They found the box, picked it up and ended up with a duck flying around in their house,” Koudreit says.

That sense of humor makes Wise a natural for leading the youth group at his Reno church. Lexi takes point while David travels to competitions during the winter, but the couple serves as youth pastors for the group. “If I can give back, I want to be involved,” he says.

“He genuinely enjoys the kids,” Koudreit says. “He has a good ability of not trying to come from above them or impress them—he jumps into wherever they are with different maturity levels and beliefs. He’d probably work with the group even if he wasn’t skiing.”

Wise knows how vulnerable the teen years can be. He struggled in high school when his parents divorced, and he rebelled against his family’s Christian faith at that time. He was a top national skier then, too, and wanted badly to be the best of the best. He says he would have bought into the whole self-centered lifestyle to reach the top. He could land the tricks the X Games athletes were doing. But his perfect practice runs kept turning to frustration in contests. It fueled his anger at God, and he tried to fill his emptiness with skiing. It didn’t work.

“Some of the ugliness of the world drew me away from God for a little while, but that experience brought me back tenfold,” he says. “Coming back was like Wow, now I can see for myself that this faith is worthwhile. It’s true; it’s real; it’s raw; it’s powerful.”

As for the current youth group kids, Wise thinks most of them don’t comprehend the level he competes at. A few do, and some hound him for the ubiquitous action sports energy drinks. Some are clueless, he says. And that’s fine with him.

Wise’s approach to expressing his faith in the ski world is similarly low-key. His style is not Tim Tebow’s. You won’t hear Wise invoking God in most interviews. But you will hear him talking about serving others and placing his wife and daughter’s needs above his own. Those are radical concepts in the circles of individual action athletes and the industry built on promoting image.

As Wise’s performance and profile have soared, a common media angle is “Who is this humble guy who would rather hang out with his wife and kid than party?” The answers are respectful and admiring. They should be. Wise comes across as thoughtful and well-spoken, whether he’s discussing designing and testing new ski prototypes, being a family man or living out his faith. It’s easy to forget he’s still only 22.

Wise says he would rather consistently live out his faith before talking a lot about it. The style matches his personality—not loud and in your face.

Still he’s been criticized by some Christians for not preaching more.

“He tries to be sincere and honest to himself and to his beliefs and faith,” Koudreit says.

“Sometimes I’m a little too quiet. Sometimes I could be more outspoken,” Wise says. “At the same time, I do enjoy when people come up and say, ‘You’re really different. What’s the deal with that?’”

With Wise’s star continuing to rise, that question will pop up more and more.

Jeremy V. Jones is a freelance writer based in Colorado. His books include Toward the Goal: The Kaká Story and Triple Dog Dare.