THIS IS EPISODE 3 OF THE SPORTS SPECTRUM PODCAST

Derwin Gray is a former defensive back, who played 5 seasons in the NFL with the Colts and Panthers. He’s also the Pastor of Transformation Church near Charlotte, North Carolina.

In this episode, Derwin shares his story of growing up without a Dad, making it to the NFL and an encounter he has with a teammate known as “The Naked Pastor” that changes Derwin’s life forever.

Derwin talks about the transition he makes from NFL player to pastoring a very large church and the tension he wrestled with in saying yes to God’s calling after his football career. 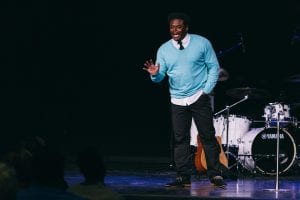 10:30 – On how being a better parent than his Dad became an idol in his life.

26:00 – His fear of planting a multi-ethnic church

30:00 – On the current state of the multicultural church in the United States

32:00 – On being a Dad to his son Jeremiah and going through the college football recruiting process

“No matter how good I got in football, I still dealt with, I’m going to be abandoned and rejected.”

“There’s nothing worse than coming to Jesus at the top of your life.”

“My passion to be a great Dad to makeup for what I didn’t get from my father, at times became an idol.”

“I don’t want to take care of my kids, I want to equip my kids.”

“The NFL Locker Room is a microcosm of society.”

“God redeems our past and He transforms it.”

“I prayed for 700 people to come, which is the most naive prayer I could ever pray.”

“So, it’s either the church is a night club for Jesus and everybody’s cool and the congregation is like the fan boy club for the Pastor, or the world is bad and evil and we can’t wait for Jesus to come and sucks us up in a vacuum cleaner and raptures us away and everything will be ok.”

“There’s a more authentic, more beautiful story of a Jesus who says I’m going to dwell my people of every ethnicity, social class, gender, to be the new family of God.”

“If there’s one thing I wish I could do all over again, It would be to not raise my voice as much with my oldest child when they mess up.”

Get in touch with Derwin online: DerwinLGray.com or twitter @DerwinLGray