Hugh Freeze is the head football coach at the University of Mississippi.

Since being named as the head man at Ole Miss in December of 2011, Freeze has become the first coach in school history to guide the Rebels to a bowl game in each of his first four seasons, including wins in the BBVA Compass, Music City and Sugar.

Ole Miss is one of five programs in the country (along with Alabama, Florida State, Michigan State and Ohio State) to make consecutive New Year’s Six bowl appearances in the first two years of the College Football Playoff system.

Freeze is a devoted husband and father who is unashamed of his faith in Jesus Christ.

On this episode of the podcast, Freeze shares about how he became a follower of Christ, his coaching journey, being outspoken about his faith, what it means to be a relational coach, balancing coaching life with family life, and how he deals with scrutiny and adversity when things don’t go the way you planned.

This is EPISODE 23 of the Sports Spectrum Podcast 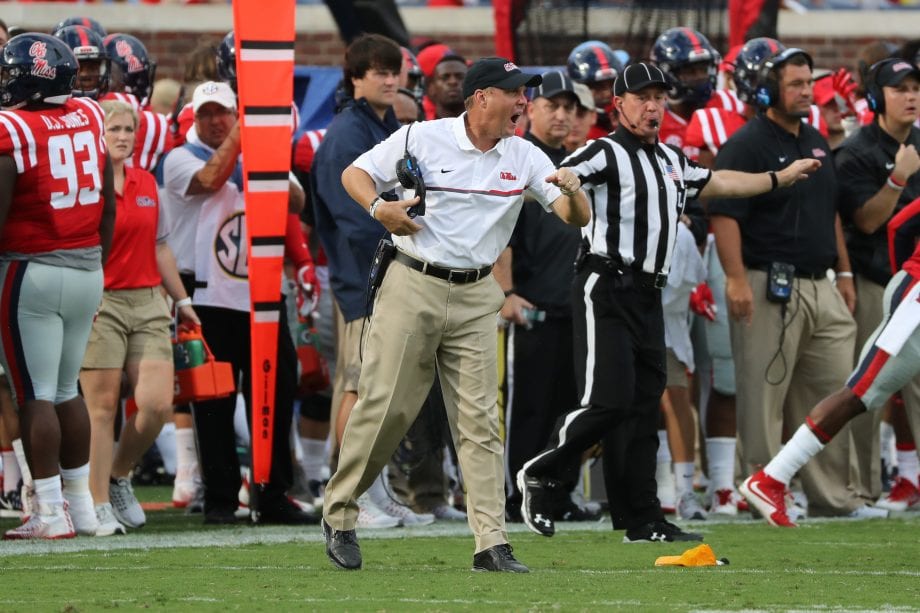 #19 Ole Miss Football vs Wofford in the home opener of the 2016 season in the new Vaught-Hemingway Stadium in Oxford, MS.
(Photo Courtesy: Joshua McCoy/Ole Miss Athletics)

5:25 – Keeping the team together and bonding as a unit in the offseason.

17:40 – Incorporating his faith into how he coaches.

21:15 – How he walks the line of being the face of a program but also being that devoted follower of Jesus

24:40 – Balancing being a father and husband with the demands of being a head coach.

28:05 – Dealing with adversity and scrutiny.

32:05 – Creating his Freeze Foundation after a conversation with Tim Tebow

“You know that you’ve impacted kids. I hear from my former players all the time. They know that I am still there for them.”

“You’ve got 30-40 families in the building that you are responsible for.”

“If you define yourself based on what that scoreboard says, everything becomes about getting them to help you get the result you want. The relational part is kind of lost. I don’t want to be that way.”

“I understand that I will be defined by wins and losses and I’m ok with that, but I don’t have to define myself that way.”

“I’ve got a short window to impact this kid, so what am I going to do that? I think we spend time building relationships with the players and families that are in this building. To me that is the most important thing.”

“At an early age of 7, I accepted Christ as my savior.”

“It’s only by God’s grace that we can overcome sin.”

“When I read scripture, I don’t really believe that there is really an option for you to be a person of faith in Christ and not make that known.”

“When I read scripture, I don’t know that the calling on your life, if you truly are a person that believes that Jesus is the way, it is the greatest gift ever given, how can I be silent?”

“I never make my faith mandatory for any of my players. I don’t think Jesus would do it that way.”

“I think it’s the greatest gift we’ve ever been given.”

“I’m the most competitive dude around. I want to win. I think Jesus made me that way.”

“Regardless of the adversity that I’m going through, nothing has changed in my calling to develop men and to help a young man to get his education.”

“These players deserve my best. One of the things I hope they would say about me was ‘man the guy was consistent’ and that I didn’t waver. in who I was.”

“Integrity is one of my core values in life. Integrity is not every single time doing what is right, or no one would have it. Integrity is when an issue arises, and something is wrong, you acknowledge it, address it and move forward from it.”

“Showing God’s love through meeting needs of people around the world. That’s what the Freeze Foundation is all about.”

“He is faithful. He reminds me of that in so many ways everyday.”

“If God never does another good thing for me, He’s done enough.”

You can follow Coach Hugh Freeze on twitter @CoachHughFreeze and see all the great work he’s doing with his foundation at freezefoundation.org.