THIS IS EPISODE 31 OF THE SPORTS SPECTRUM PODCAST

He was selected to play in 6 MLB All-Star Games and played in two World Series with the Astros in 2005, and the Cardinals in 2011.

He was a key contributor to the St. Louis Cardinals winning the 2011 World Series where he hit .417 with 11 hits, 9 runs scored, and a clutch RBI single in the bottom of the 10th inning to stave off elimination and eventually help the Cards beat the Rangers in Game 6 and eventually win it all.

A husband to Cara, and a Dad to four daughters, Berkman is currently working with former teammate and friend, Andy Pettitte, the longtime Yankees pitcher, where they both coach high school baseball for Second Baptist School in Houston.

On this episode of the podcast, we talk to Lance Berkman about his experience coaching high school baseball, how he lived out his faith in Christ as an MLB player, what being drafted by the Houston Astros meant, if he ever struggled with identity during his career, and what it was like to play in that memorable 2011 Game 6 World Series matchup vs the Texas Rangers. 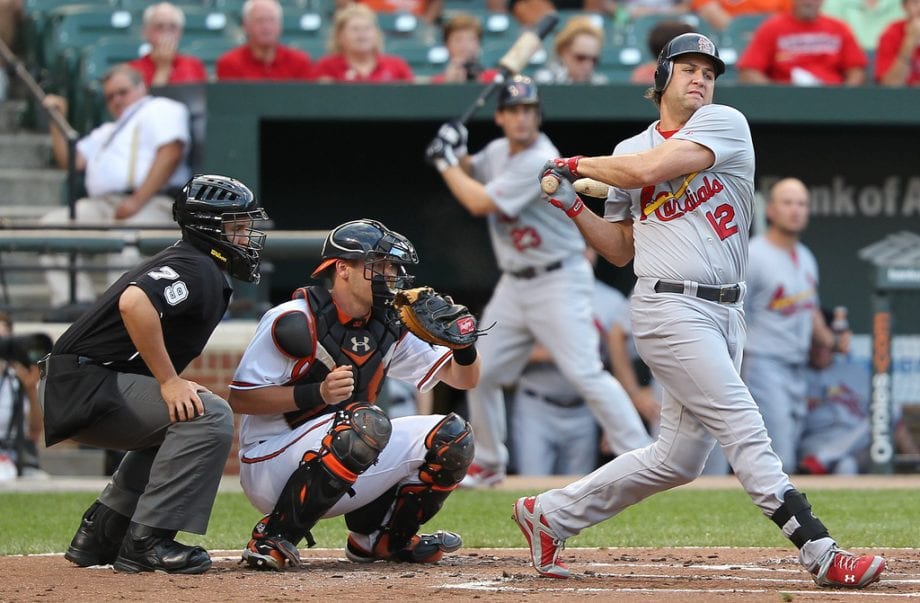 Cardinals Lance Berkman (12) takes a swing in a game against the Orioles on June 29, 2011. (Photo Courtesy: Keith Allison/Flickr)

6:15 – Biggest challenge to being a high school coach vs a player.

12:05 – On being drafted in the first round by the Houston Astros

20:30 – Biggest adjustment fitting into the Astros lineup early in his career.

24:31 – Has he ever struggled with identity during the peak of his MLB prime.

28:45 – Developing a discipleship group during his career.

30:40 – On balancing being a baseball player with being a husband and a Dad.

33:40 – The moment he was traded from Houston to the NY Yankees.

42:00 – Playing in World Series Game 6  — one of the most memorable playoff games in MLB history

47:10 – On what makes the St. Louis Cardinals fanbase so special

59:15 – What Lance’s biggest struggle as a believer in Jesus is right now.

“There’s way more to life than being a good baseball player.”

“When I started to have success (in MLB), I still felt like I was up here trying to survive, even the years when things are going well for you.”

“God gave me favor in the area of knowing that baseball wasn’t the end all be all.”

“Even in those great seasons, when you post those numbers, you realize that while they are nice to experience, they pale in comparison to the eternal impact you can impact people.”

“It’s essential if you’re going to live a consistent Christian life. It’s almost a must.” – On having accountability groups during his MLB career

“We’d have a chapel service and we’d have 20 guys out of the 25 man roster that would show up. That’s almost unheard of.” – On the 2011 St. Louis Cardinals World Series team

“It’s not just memorizing scripture, it’s using scripture by the practical ways that we live.

“Giving back is not an option for believers. That is a biblical command. It’s what God wants us to do.”

Lance is a contributor to The Increase where he shares stories and opinions. You can follow along with his articles here. You can also watch Lance’s Increase story below.