Former St. Louis Cardinals pitcher Chris Carpenter won 144 games in his Major League Baseball career. In 2005, he was the best pitcher in baseball and received the National League Cy Young Award after winning 21 games. He’s a three-time All-Star and a member of two World Series championship teams with the Cardinals. After struggling with injuries and only pitching in three regular-season games, his career came to an end in 2012 at the age of 37.

When we see a pitcher winning awards, winning World Series and making millions and millions of dollars, we equate that to success. But inside, Carpenter was struggling and he allowed the lifestyle of a big-league player to consume him.

Carpenter says he would wake up each morning with guilt and shame, wondering why he acted a certain way or why he said something he shouldn’t have to someone. He was broken.

“I continued to spiral down to beating myself down every single day,” Carpenter said. “No matter what I did, it led to the end. I was lost.”

Carpenter’s teammate, Adam Wainwright, made a point to invite him to baseball chapel on many occasions, and Carpenter would continue to shrug it off. Even after his friend gave him a Bible, Carpenter wouldn’t budge. But Wainwright did not stop pursuing. With chapel getting no traction, Wainwright instead started inviting Carpenter to a charity golf tournament he held in Georgia. 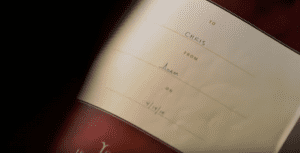 After being asked to go to this tournament for a few years, Carpenter finally said yes. “In the back of my mind, I was like, ‘I got other things to do,'” Carpenter said. “But for some reason, this year, I said yes.”

After an evening of drinking, hanging with friends and doing things he says he shouldn’t have been doing, Carpenter found himself literally in the middle of nowhere — an hour and a half away from where he was supposed to be. Lost, broken, isolated, alone.

“My phone was dead. I had no way to get home,” Carpenter said. “I literally raised my hands to the sky and asked God for help. I said, ‘I don’t know how You can do this but I need to get home and I need to be saved.'”

Fifteen minutes later, Carpenter says a cab showed up. It was a man, his wife and in the backseat was their dog.

“I rode home with a dog in the backseat. They asked me how I got out here. I said, ‘I don’t know.’ They brought me back, dropped me off at the place I was at the night before. I packed my bag and went to the airport.”

Carpenter says that night is the moment he dedicated himself back to the Lord, and he’s now convinced there is a Creator who loves him more than he could ever imagine.

“Anybody that doubts that there is a God, I know I can’t,” Carpenter says. “I want to love like He loves me. And how He took care of me and how He saved me. He is everything to me, is what He is.”