University of Virginia Baseball Players Lean on Faith To Carry Them

By Sports Spectrum May 9, 2017
Chapel Hill, NC - May 15, 2015 - Bryson Field at Boshamer Stadium: Pavin Smith (10) of the University of Virginia Cavaliers during a regular season game (Photo by Phil Ellsworth / ESPN Images)

(This May 6, 2017 article has been reprinted with permission from the The Daily Progress)

Of Faith and Baseball: The Story of Virginia’s Adam Haseley and Pavin Smith

Pavin Smith heard the clicking sound of the key card and hardly perked up. He knew Adam Haseley, his Omaha Hilton roommate of two weeks, was returning from a Virginia pitchers meeting, but he was completely unaware of the news Haseley had just gathered.

It was the morning of June 23, 2015, potentially the last day of the college baseball season. The Cavaliers were less than 12 hours removed from dropping Game 1 of the College World Series finals to Vanderbilt, and in eight hours would be back at TD Ameritrade Park to avoid elimination in Game 2.

The fact that Haseley was giving his teammate and classmate a blank stare was nothing new. If there was anything the Virginia duo learned about each other as freshmen, it was they’re pretty much the same.

Haseley pointed to himself.

“I don’t know if I would have told him, honestly,” Haseley recalled recently. “I didn’t think I was going to tell anyone. I barely told my dad.” 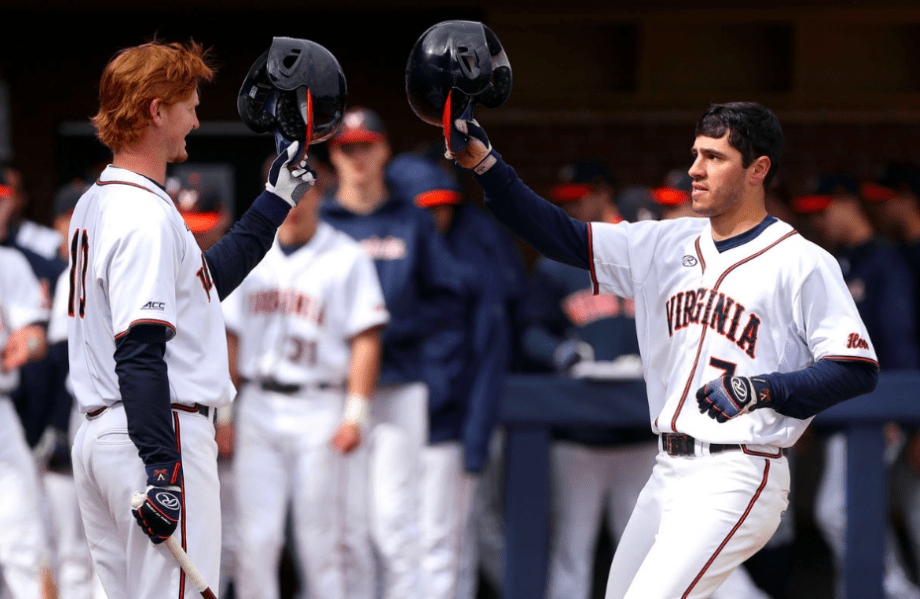 Rich and Mary-Kay Haseley raised their son in a faith-based home. Adam graduated from First Academy, a Christian school in Orlando, Florida.

He quickly earned the nickname “Rev” while at Virginia, a moniker with roots to a fall team meeting in which rookies told the clubhouse what’s most important to them.

“Baseball’s a tough sport,” Rich Haseley said. “Faith is his source of strength.”

Haseley barely remembers eating on June 23, 2015 — although his father confirmed he consumed a plate of pasta for lunch at a downtown Omaha restaurant — but he can quickly pull up the Bible verse he repeated to himself while posting five shutout innings and keeping UVa’s dream for a national title alive.

“Romans 8:37,” he said after a brief search through his phone. “In all these things we are more than conquerors through him who loved us.”

Haseley was not only facing the defending national champion Commodores in front of 24,645 people, he was making his first start in a month.

“I guess,” he said, “I was telling myself, ‘God gives us strength to be more than a conqueror.’”

Even now, as Haseley is polishing one of the best all-around seasons in program history, his come-from-nowhere performance on the mound against Vandy remains his signature Cavalier moment.

And Smith, on an All-American pace on his own, remains Haseley’s roommate.

“I think it’s their faith that matches them up,” said Virginia associate head coach Kevin McMullan, “and their belief in what they believe in. I think that’s something that connected them right away.”

Adam Haseley and Pavin Smith, batters No. 3 and 4 in the UVa lineup, walked nearly step for step with each other to the home dugout at Davenport Field.

The Cavaliers were about to practice on this April afternoon, a few days ahead of a weekend series at Florida State, but the conversation turned to the past.

Haseley: “We met each other the summer coming into here.”

Smith: “No, it was before that. We met once before.”

Smith: “At that workout thing.”

Haseley: “Yeah, that was in the summer.”

Debate conclusion No. 1: Despite both being from Florida, Haseley and Smith barely knew each other upon arrival at Virginia.

Debate conclusion No. 2: Haseley and Smith know plenty about each other now.

The duo, each ranked among Baseball America’s top 13 prospects for June’s MLB Draft, has shared an apartment for two years. Smith doesn’t have a car in Charlottesville, so Haseley takes him everywhere.

But mostly a rotation of chain restaurants.

On Easter morning, Smith found his way to the McIntire Amphitheatre on UVa’s Grounds.

A sunrise service was in session and Haseley was a featured speaker.

“I was nervous,” Haseley said. “If I did that my freshman year, I’d be completely shaken. Probably would say no to it. I think it’s something that as you grow up you’re a little more comfortable with.”

“The nervousness in that situation comes from who you are as it relates to your relationship with God,” Guthrie said. “And you’re standing there and telling people, in front of however many people it is, you’re hoping that your example and the way you live your life is consistent with what you’re saying.

“There’s a tremendous amount of responsibility with that. We talked about that in getting ready to do it. You don’t want to ask somebody to do that if their life isn’t living out what they’re going to talk about.”

Haseley’s message, delivered with his family in attendance, was authentic to the person who not only hovers near the top of the ACC in batting average (.399), hits (71), runs (55) and pitching wins (seven), but the one who draws a cross in the batter’s box each time he steps to the plate.

“It’s what he relies on,” Rich Haseley said. “And it’s always been that way for Adam. It’s just become more and more as he’s matured as a baseball player. He just gets a better understanding of what that faith means.

“I continue to thank him for the blessings,” Smith said. “Every time I hit a home run, I point to the sky. Just try to give the glory back to him.”

“I’ve given it to a number of different kids who all struggle with attitude and baseball because it’s such a sport of failure,” Tim Smith said. “It’s not the most well-written book, but the content is just fantastic. If you’re somebody with faith and you believe God has purpose in your life, it’s fantastic.

“It’s all about getting pride out of the way and not wanting to look good and have fame and fortune. Because when that’s the focus, you’re only going to be happy when things go well.” 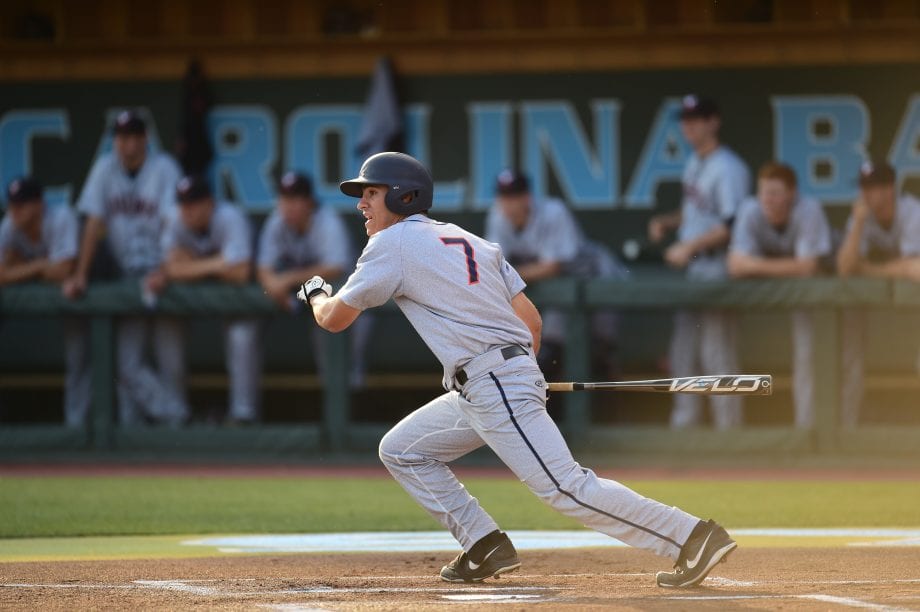 On April 4 of this year, Smith started his own tradition in post-game press conferences. Anytime he’s called to speak with the media, he brings the other requested player with him.

Naturally, Haseley was the first to share the microphone after the two combined for three home runs and 10 RBI in a Virginia rout of Old Dominion.

And, naturally, they echoed one another when a reporter was curious as to why they were dominating in their high-pressure, draft-eligible years.

“I definitely try to stay off the Internet,” Smith said. “That keeps the pressure down. But I keep my faith in God and let everything else happen.”

Added Haseley: “I’ll say pretty much the same thing he was saying at the end. For both of us, our faith is really important. It’s a matter of taking the pressure off and just trusting in the bigger plan.

“I know that’s for me. And he would say the same. It’s just going out there and playing and having fun. And enjoying the opportunity we’ve been given.”

While the results — a 36-11 record and No. 12 national ranking — are on par with Cavalier squads of the past, the clubhouse has a unique feel.

“Over the years,” Coman said, “I’ve played with guys — [Derek] Fisher and [Brandon] Downes, those guys are big locker room personalities — but now you got guys in Adam and Pavin leading the team that are quiet, reserved, don’t say a whole lot. They’re not going to yell, they’re not going to scream. They keep to themselves and go about their business. I think they lead by example.

“It might be a little different than the previous guys I’ve been used to, but I think they’re doing a great job.”

Shortstop Ernie Clement, who gives the Wahoos a trio of All-ACC juniors, shares an apartment with teammates Charlie Cody and Justin Novak that sits above Haseley and Smith’s place.

“It’s something I started right before Omaha our freshman year,” Clement said with a grin. “I thought it was kind of funny. He didn’t have a Twitter back then. I obviously asked him if it was OK. He thought it was funny just because he’s a religious guy and turned it into a religion/baseball ordeal. Everybody got a good laugh about it.”

“I feel a lot better now that he’s put ‘This is not affiliated with Adam Haseley,’” Haseley said. “For two years, it never said that. People thought it was me.”

“We both enjoy what other guys do,” Haseley continued. “We’re not just like these crazy, spiritual people that just sit around and don’t do anything. I think it’s more the big picture stuff we take seriously. Being a positive influence for those guys. If they’re maybe struggling for some stuff, we can share what kind of hope that you can have and the peace that you can have.”

It’s perspective and balance from Haseley and Smith that Virginia head coach Brian O’Connor labels as “fantastic” for this team. 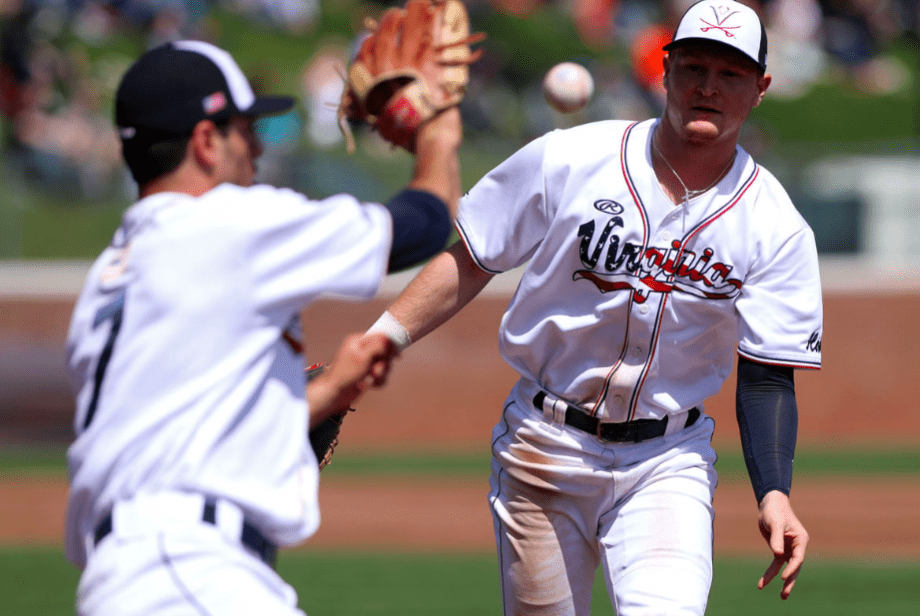 “They’re both pretty soft-spoken, not outwardly emotional guys off the field,” O’Connor said. “But I do know for a fact that their teammates absolutely look up to them.

“Certainly their performance on the field speaks for itself, but you look up to somebody who does things the right way, that has their own house in order. Both of those guys do. And you respect who they are as people. I know their teammates respect them and look to them for leadership for all those reasons.”

On Jan. 9, the official NCAA baseball account tweeted a photo of TD Ameritrade Park with the caption: “Omaha, The Beautiful. #CWS.”

@HaseleyTheRev quoted it and replied: “We will see you in June.” It’s still pinned at the top of the page.

The real Pavin Smith liked it.

“It’s not like we have a cheat code that automatically gives us success or something,” Haseley said, “but I feel like we’ve both learned and grown through a baseball point of view.

“Our skill and stuff has gotten better. You couple that with our mental state and trust in God, it gives us a decent opportunity to be successful.”

Andrew Ramspacher covers University of Virginia athletics for the Daily Progress. Contact him at (434) 978-7250, aramspacher@dailyprogress.com or on Twitter @ARamspacher.