Colombians, Americans and Venezuelans filled both dugouts. Though not all of the players on either side of the diamond spoke the same language, baseball bridged the gap and allowed them to connect in ways they couldn’t before. For the Americans who could also speak Spanish, the experience was amplified.

“Playing baseball with Venezuelan players was incredible,” junior A.J. Dhus said after the Wheaton College (Ill.) baseball team’s recent week-long mission trip to Colombia. “Baseball was the common language for everyone, which made the field feel like a home all of us shared. Speaking Spanish made the whole experience infinitely better — sharing a language made the community within the games not feel like ‘the American baseball team coming to play with the Venezuelan refugees,’ but simply a bunch of guys playing baseball.”

The “American baseball team” consisted of 38 Thunder baseball players, three coaches and an athletic trainer. For the majority of them, the language barrier was one of the many obstacles they faced. But alongside a few missionaries — doubling as translators — and advice from head coach Matt Husted, the Thunder persevered through every challenge.

“Our guys did such a great job of grinding. I just told them, ‘Listen, you are going to be in this environment once in your life, you are probably never going to be back in Colombia again, so we’re not going to worry about how much sleep we’re getting, how tired we are. Let’s go.’ And they were awesome, I was so proud of the boldness that they had.”

With confidence in something greater than themselves, the Thunder players paired the game they love with the power of the Gospel, something the Wheaton baseball program has been doing for quite some time now. Wheaton College as a whole strives to offer “an affordable, top-tier education that prepares students to make an impact for Christ,” and Wheaton Baseball has now partnered with Score International Missionaries to go on four mission trips in the past decade — the Dominican Republic (2010), Panama (2013), Cuba (2016) and now Colombia (2020).

On this particular trip, the Thunder split time between Bogotá, the capital city, and Fusagasugá, a smaller Colombian town.

In Bogotá, the Thunder embraced an entirely new country, culture and capricious schedule as they pursued their mission to share the Gospel everywhere they went.

“I’ll get up tomorrow and there will be differences in what I experience today, but there is a whole lot of the same. Every day when you wake up in a different country like that is something you’ve never experienced before,” shared Coach Husted. “The other thing is, when you’re on a mission trip like that, your every day is sharing the Gospel. Much like we’d like to say that’s our every day now, it’s not. Seeing what that’s like and the effects it has is amazing.”

The Thunder’s schedule was inconsistent, to say the least, yet the trip was invariably marked by God’s leading, as seen through His timing. The Thunder intermixed a couple service projects into their day-to-day, which included handing out sandwiches to Venezuelan refugees. The Thunder’s service came when the immigrants needed it most.

“There were a couple of neat stories where some people said they had prayed the night before or even minutes before, ‘God I don’t know where my next meal is coming from, please send somebody,’ and then we showed up,” Husted said.

The Thunder continued to be faithful in showing up by putting on baseball clinics for Colombian children — some who had never even held a bat before they met the team. After the clinics, the Thunder shared some of the ways they have experienced Jesus Christ, on and off the field. Their words moved several of the children to action.

“Our guys gave their testimonies after the clinics. Baseball was merely a platform for them to share the Gospel,” Coach Husted said. “It’s one thing when you’re at a Christian school and you’re playing for a Christian team, but it’s altogether different when you’re sharing the Gospel and you see people commit to faith at that moment. That’s pretty special.” 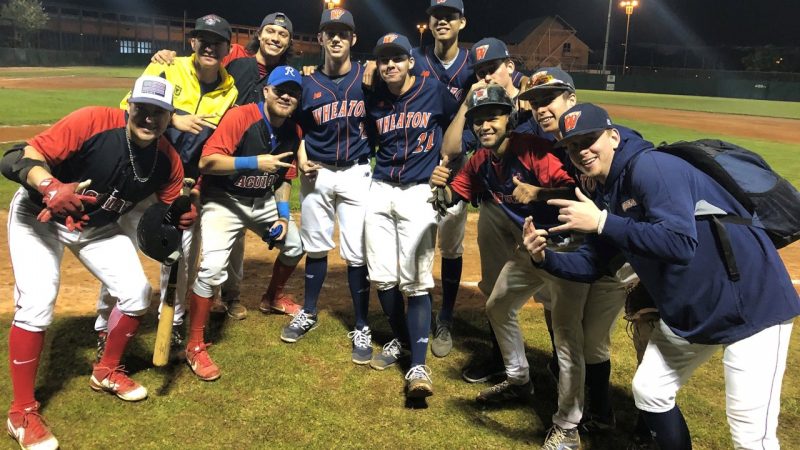 The Thunder then spent a few eye-opening days in Fusagasugá, a small town 40 miles southwest of Bogotá in the valley between the Cuja and Panches rivers. Their first stop in Fusa was a Rawlings Group Christian Camp that brings various groups of people, from soldiers to children, at no cost, to hear the Gospel.

“When we first got to Fusagasugá, they were running a camp for 160 soldiers, so our players got to be a part of that,” Husted said.

The Thunder played various sports with the soldiers on their last day before leaving on a dangerous six-month patrol in the mountains.

“It was a cool experience to spend some time with the soldiers before they headed off to patrol,” said Christian Bolhius, a fifth-year senior pitcher. “While only a few of us could speak or understand Spanish, we were able to use what knowledge we did have to get to know the soldiers and compare American culture to Colombian culture. It was also neat to play different sports, like soccer, with them because you didn’t need to understand the same language to play.”

The next day, the soldiers left for the highlands while the Thunder rolled up their sleeves. They tackled another service project and repaired a dirt road near the top of a mountain that had been washed out by the rain.

“The guys worked at creating an area for the runoff of rain — moving rocks, cutting weeds, and digging dirt. In the middle of the road, there were some giant rocks that the guys had to break off with sledgehammers; it was tough work,” Husted shared.

After laboring for hours, the Thunder were graciously invited into the home of some of the people living at the top of the mountain for a warm meal. They ate, engaged with the company there, and then headed back down the road they restored. Once the Thunder left, the people that fed them kept one of the missionaries accompanying them up there, a little longer.

“They said, ‘Hey, you got to explain something to us, why did these guys do this? What were you paying them to do this?’ And the missionary told them, ‘We didn’t pay them anything,’” Coach Husted said. “So, they said, ‘Well, why would they have done this?’ The missionary responded, ‘Well, because of the Gospel.’ And the people said, ‘We want you to come back and talk about that more because that just doesn’t make sense to us why they would pay money to come and do these things.”

The people in the house were drawn by the mystery of a college baseball team taking substantial time away from their preseason to teach children how to play baseball, feed refugees, play soccer with soldiers, and repair roads.

For the Thunder, the trip wasn’t about getting time on the field. Baseball was simply a platform for them to spread the Gospel everywhere they went.