For most it might have felt like taking a baseball bat to the gut: the opportunity of a lifetime indefinitely postponed at the moment it had just been realized.

Here she was in Jupiter, Florida, at spring training. She’d hit the big time — the biggest game of them all — Major League Baseball. After months of back-and-forth negotiations, Tina Plew Whitlock had finally landed a contract as a coach for the St. Louis Cardinals.

Just as she was stepping onto the perfectly manicured field, the gates closed and spring training was over — cancelled because of the coronavirus.

She has so much to offer because she is the coach of the comeback. She’s your go-to when your perfect game plan gets torched and you’re left with nothing but the choice to quit or start over.

I’d assumed she’d be disappointed that she lost her first spring training in her first couple weeks as a Major League Baseball coach. I’d be wrong.

“I’ve trained my whole life for delays,” she says, filled with peace. “We’re always at the mercy of weather. Now I have another chance to make a first impression.”

It’s the Whitlock Way, if you will. A faith and hope long ago forged and tested in fire.

Like all big decisions in her life, when the Cardinals came calling months ago and offered Whitlock a chance to come onto their coaching staff, taking that bat of hers and leaving another crack in the glass ceiling, Whitlock asked to first pray on it. She packed up her two teenaged boys and headed to a favorite outdoor retreat where she sought the Lord’s guidance.

“He confirmed it to me: ‘This is the door I’m opening for you.’ And we all know what happens when He opens doors,” she says with a quick laugh.

It was an answer to prayer and the realization of a dream that took decades to even develop.

As a little girl, Whitlock didn’t grow up dreaming to be a coach in the big leagues. She was too busy being a player. She played baseball with the boys, never making a distinction between them and her — a distinction that’s still mostly lost on her. She appreciates that she’s one of a few female coaches in Major League Baseball right now. But that’s changing, she says, as the goal is simply to get the best minds in the game. For Whitlock, it’s never been about gender, but about greatness. So be it baseball or softball, playing or coaching, Whitlock just wants to be great.

The University of South Carolina was the biggest school to notice the outsized potential of this utility player from California who, though small for a catcher, punched well above her weight behind the plate, as well as in the outfield. And once you put a bat in her hand, she always smashed expectations.

A two-time collegiate All-American who set a number of batting records during her tenure, she helped her 1997 Gamecock squad win the SEC Tournament and book a trip to the Women’s College World Series. She earned a berth on the U.S. national team and played in the pros.

She married her college sweetheart, Brian Whitlock. Back in the day, devoted Gamecock softball fans knew their team had dominated on the road with a quick glance behind the team bus, where the ever-faithful Brian would be trailing in his truck, two brooms sticking out from the back windows, signifying Tina and the girls had swept their series.

The Whitlocks would welcome a son, Aaron, and a couple years later another was on the way. They had the perfect game plan.

And it proved absolutely worthless. Only days before birthing their second baby, Tina buried her husband.

Her big, strong, healthy, young husband had an undiagnosed heart ailment. And just like that, Brian was gone, along with their game plan.

So with a potent mixture of profound joy and shattering sorrow, she welcomed his namesake, Brian Kelly Whitlock, into the world nine days after his dad left it. 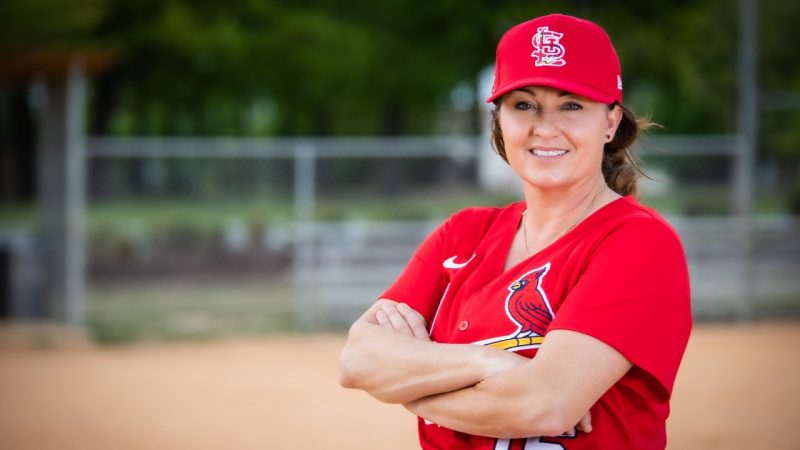 Tina is a woman of deep faith who leaned hard into God during her walk through the valley of darkness. She says intercessory prayer buoyed her and her boys in the immediate wake of her husband’s death, and that she just “kept walking” through it. With God by her side.

Retired from professional softball, when she felt strong enough to coach, this 20-something packed up her little family and moved to New York, to a college coaching job, and with a deep desire she says the Lord put on her heart to “live like the birds,” trusting that He would take care of them and provide for their needs.

She made Matthew 6:26 their family mantra: “Look at the birds of the air; they do not sow or reap or store away in barns, and yet your Heavenly Father feeds them. Are you not much more valuable than they?”

She laughs that God has a great sense of humor. In New York, her family moved into a renovated barn. It would be the first step of many professional opportunities nationally and internationally over the years.

Along the way, Tina would wrestle with her faith and her disappointment that, as a single mom, she was flying solo. But the thing is, when you wrestle with God, He always wins. But you win more.

And that’s what happened with Tina. Eventually she flew back to the One who had been there all along.

At first she says she began seeking solace. And in that quiet time, God asked her to serve those who’ve traveled the same journey. So she started a ministry called “Birds of Blessings” that encourages other young women.

By now she had years of coaching experience under her belt, so when the idea was pitched that she would be a great fit for Major League Baseball looking to bring female talent into its rank, a dream was born.

“Why not the big leagues, Lord?” she asked. “Is it time for me to swing for the fences?”

His answer was a contract with the St. Louis Cardinals.

Had a visitor today… I think he was singing..”Take me out to the ballgame.” ⚾️ pic.twitter.com/jiNKvZJHp4

They say a cardinal represents a loved one who has passed, that when you see one it means you’re being visited. As the thinking goes, cardinals usually show up when you need that loved one or miss them most, to let you know you’re never alone — that they never really left you.

While Brian Whitlock was a Braves fan, Tina knows it’s no coincidence God has her coaching this team at this time. All those years ago when Brian died and that door was slammed shut, Tina made a choice — a promise actually — to live like the birds.

And God responded by throwing open a window and in His perfect time — in flew the Cardinals.

Then, of course, came COVID-19. Another change to the game plan. For Tina, it’s just another opportunity to wait and see what God will do.

She trusts that the same God who closes doors and opens windows has a plan for what happens post-coronavirus. She remains excited and hopeful, because if there’s two things Coach Tina Plew Whitlock knows about, it’s how to crush a ball and make a comeback.