Matt Carpenter believes that “offseasons,” such as the coronavirus quarantine, are not about him, but about what God is doing. While this time of sheltering at home has caused disruptions to the 2020 MLB season and to the world of sports, Carpenter thinks these moments are best spent surrendering to the Lord.

The St. Louis Cardinals infielder said in a recent “Quarantine Questions” interview with Water Mission, “It certainly feels weird to not be playing baseball right now but it’s kind of the cards we’ve been dealt. We’re doing our best and holding as strong as we can.”

This prolonged time with his wife, Mackenzie, and their two toddlers at their ranch in Texas has given Carpenter the opportunity to experience spring at home — a first in 13 years. He says it has changed his perspective on what productivity means.

“The quality time I’ve gotten to spend with my family has given me a chance to sit at the table with them every night. We are getting to spend that time with each other with very minimal distractions. I’m realizing what a blessing that is,” Carpenter said.

While his career as the Cardinals’ primary leadoff hitter has demanded a fast-paced and hectic lifestyle, sporting event cancelations and stay-at-home mandates have pushed him to slow down and dive deep into fleeting moments.

“I hear from people all the time, ‘Hug your kids as much as you can because they’re only little for a short time,’” Carpenter said. “[Quarantine] is slowing things down … God’s given this to us for a reason. That’s been our perspective.”

This period of slowing down is familiar to Carpenter. Over a decade ago, when he was a player at Texas Christian University, he tore a ligament in his arm and had to undergo surgery. The recovery period forced him to be still and to reconsider his plans, actions and relationship with God.

“That’s when I realized that I had to make changes in my life,” he told Sports Spectrum in a 2018 interview. “Things weren’t going the way I wanted them to at all. I was calling myself a Christian but the way my life was heading, it just wasn’t adding up. I needed to make some changes.”

After surgery, Carpenter became motivated to get into the Word, go to church again, and, in his words, get his “relationship with the Lord in order.”

But even though he grew in this season, it didn’t necessarily mean that things would go as he had planned. In fact, when he started back on the field, he played poorly. He then realized that he still placed his faith and identity in the game and not in God.

Since then, Carpenter has made it his mission to put God’s will and His Kingdom first. One of the ways in which he and his wife have served the Lord and followed His calling is by becoming a Water Mission Ambassador, partnering with an engineering ministry that provides clean, safe water in rural, refugee and disaster settings.

“Our mission is to spread God’s Word and His Kingdom,” he said.

Today, more than 2.2 billion people do not have access to safe water — that’s one-third of the world’s population living in water scarcity and with waterborne and water-related illnesses.

“A lot of us here in the United States don’t even understand what a real struggle it is. Not to say that we don’t have problems here, but for something as essential as clean water — to not have that is unfathomable,” Carpenter said.

He and his wife recently watched a video capturing the impact that safe water has on communities. This video was about a recent trip that fellow baseball players and I made to Uganda, where refugees benefited not only from Water Mission’s safe water projects, but from Living Water ministry activities, such as trauma healing programs, that we collectively helped to realize. 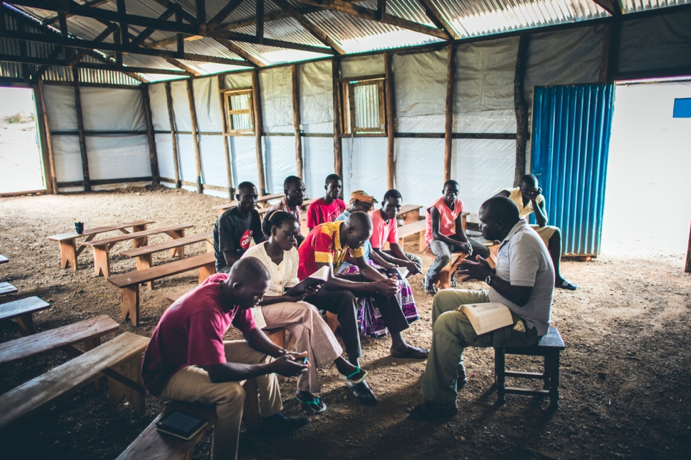 “To be able to see first-hand what the ministry is doing, the joy that comes with that is really hard to explain,” Carpenter said. This joy anchors him during this season of waiting. “We know that not only is it saving lives but we’re doing it with a Godly purpose. What more can you ask for? It’s just a really special thing.”

Scott Linebrink was an MLB pitcher for 12 years, and now works as a Water Mission stewardship advisor.