Royals GM Dayton Moore guided by selflessness: 'I’ve got to follow something, and for me that’s Jesus'

It’s a simple piece of advice from his father that has guided Dayton Moore in his career as a baseball executive.

“Just be the best you can be at the job that you’re being asked to do,” Moore said recently on Sports Spectrum’s Get in the Game Podcast. “I go back to one of the principles my father taught me. He said, ‘Son, work every job you have like it’s the last one you’ll ever have. If you do that, chances are it probably won’t be, and there will be more opportunity for you.’”

It was never in his grand plan to one day be the general manager of the Kansas City Royals — his childhood favorite team — but 16 years in on the job, Moore credits his career trajectory to an attitude of gratefulness, selflessness and reliance on God.

In 2005, he was working as the assistant general manager for the Atlanta Braves when the Boston Red Sox courted him to interview for their general manager position. It wasn’t an interview he sought out, but he took the meeting out of respect for the organization and their interest in him.

He was content in Atlanta, though. He and his wife had a community of friends, they were involved in their church, and he felt like he was part of the succession plan for when the Braves were to make a change at GM. Moore entered the major leagues in 1994 as a scout for the Braves and had been with them through their run of success in the mid-1990s to the mid-2000s, which included a World Series championship in 1995 and 11 straight National League East championships from 1995-2005.

During that time, Moore moved up the ranks before taking over as director of player personnel development in 2002, then being named assistant general manager in 2005.

He was courted by a number of teams, in addition to the Red Sox, following the 2005 season, and his answer was always that he was flattered, but he was content in Atlanta. That was even the case when the Royals reached out.

This one made him pause, though. The Royals were owned by David Glass, the former chief executive officer of Wal-Mart and a man that Moore held immense respect for. He took the meeting, once again out of respect for who was reaching out to him. Glass flew to Atlanta and met with Moore to offer him the general manager position for the Royals.

“I went into that meeting basically to say, ‘I appreciate your willingness to talk to us and your interest, but no thanks. I’m staying here in Atlanta,'” Moore said. “But I found myself really connecting with his heart. Sitting down one-on-one. I wanted to see this guy do well. It still took me 10 to 12 days to really pull the trigger on it, because there was no reason to leave Atlanta. I was part of the succession plan, our family was thriving, we had a great church home. I loved the people I worked with. I loved the players. We were winning every single year. There was no reason to ever leave.

“We decided to do it. I wasn’t sure how it was going to end up, but I knew that we needed to take a step of faith and to not be fearful, but to try to go do something special in Kansas City.”

Moore was hired on June 8, 2006, and less than 10 years later the Royals were in the World Series back-to-back years. Their championship in 2015 was the organization’s first since 1985.

As Moore reflected on his career, he said he couldn’t have dreamt of being where he is. His father died at 49, and times were tough for he and his mother. She worked two jobs — 40 hours a week for a cable company, and night shifts at K-Mart four nights a week. At school, he struggled in class with just a 2.2 grade point average.

“I look back on my career and think, ‘How couldn’t there be a God?’” Moore said. “Because there’s no way to explain my career path in this game and what we’ve been able to experience unless there’s a God.”

It’s amounted to him adopting a leadership style guided by Philippians 2:3-4, which says, “Do nothing out of selfish ambition or vain conceit. Rather, in humility value others above yourselves, not looking to your own interests but each of you to the interests of the others.”

“It’s a simple principle. It’s hard to follow,” Moore says. “It really is, because our human nature tells us to take care of one, look out for self, get all you can while you can. Those are lies that we’re told in this world, and so you’re always fighting that worldview. But Scripture reminds us and tells us that’s the secret to success — putting others first.” 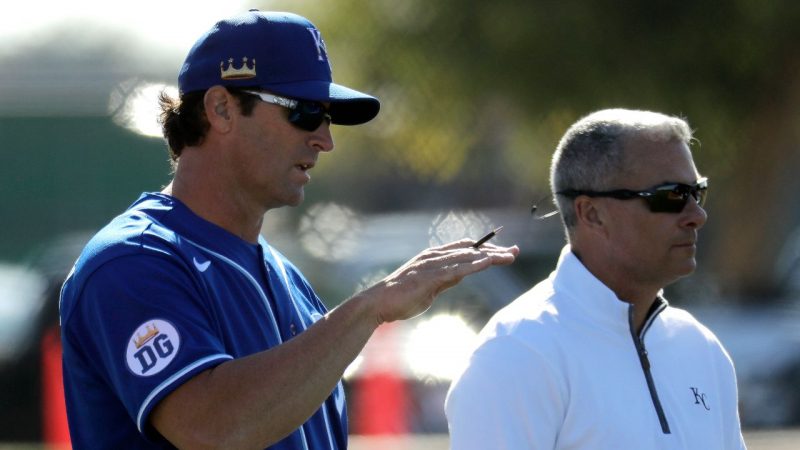 Even as GM, he doesn’t try to overstep his bounds. He lets others do their jobs while he does his. But he said he does like to hang around in different places just to offer encouragement.

“One thing I’ve learned through trial and error: It’s very difficult to motivate people, but the only success we’ve ever had in motivating people is encouraging them,” he said. “Believing in them. Reminding them that we care about them. We don’t value them as human beings based on how they perform on the baseball field.”

It’s the same way he operates at home with his wife, Marianne, and kids (daughters Ashley and Avery, and son Robert), in the community, or even with strangers: less self, more of others. He’s happy to take a backseat.

“I know that it’s impossible for me to lead well as a husband, as a father, as a general manager, in my community, unless I’m a follower,” he said. “I’ve got to follow something, and I’ve got to lean into something, and for me that’s Jesus. I’ve got to follow Him, and if I’m following Him, things tend to go at a more peaceful pace — less anxiety, less frustration. That doesn’t mean I don’t battle the same emotions as everybody else, because I do.