Imagine it’s mid-February 2023 and the East Carolina baseball team is warming up for its first game. Parker Byrd would be dressed, all warmed up, maybe even a little nervous as the Pirates’ announcer begins to introduce the starting lineup: “A 5-foot-9 freshman from Laurinburg, North Carolina, Pirate fans, let’s hear it for No. 16, Parker Byrd!”

This is what Parker expected to hear this spring as he ran onto the field of Clark-LeClair Stadium for the first time as a college baseball player. Parker had dreamed of playing baseball at ECU (Greenville, North Carolina) and verbally committed to the program when he was a freshman at Scotland High School in Laurinburg. Parker was one of the best shortstops in North Carolina and was listed as the 75th best in the country, according to Parker’s bio on the ECU athletics website. Parker, with help from his dad, Jeff, worked tirelessly to make his dreams come true. Jeff said that Parker has the mentality of “I’m going to outwork you,” and there weren’t many times where that wasn’t the case.

However, here is Parker’s new and unexpected reality: By mid-September 2022, Parker was recovering from his 22nd surgery after a boating accident on July 23, an accident which left him without a right leg just below the knee.

On that fateful day, Parker and his friends had taken a boat out on Bath Creek in Beaufort County, N.C. It was a normal day filled with laughs, swimming and tubing, until Parker and one of his friends were thrown off of an inner tube being pulled behind the boat. Parker’s friend was able to get back on the boat, but Parker wasn’t as lucky. He was tangled in the rope that connected the inner tube to the boat. The rope then caught in the propeller, which began pulling Parker toward the boat, and soon into the spinning blades that cut his legs.

Parker was airlifted to East Carolina Health Medical Center and received care from several specialists and doctors. Mitzi, Parker’s mom, says the medical team worked relentlessly to save Parker’s leg, but the injury was severe enough that amputation was the only option.

Parker was 18 and a new college athlete with dreams of playing in the big leagues one day. But in July, a doctor entered his hospital room in the intensive care unit and said, “We have to amputate your leg. There’s nothing else we can do.”

Many people may have slipped into a dark hole. But not Parker Byrd. The news was gut-wrenching and took time to process, but Parker’s perspective on life and his loss helped him see light at the end of a dark tunnel.

“That’s just who he is. …There’s no situation that really gets him down, because that’s not how he approaches anything,” Jeff said. 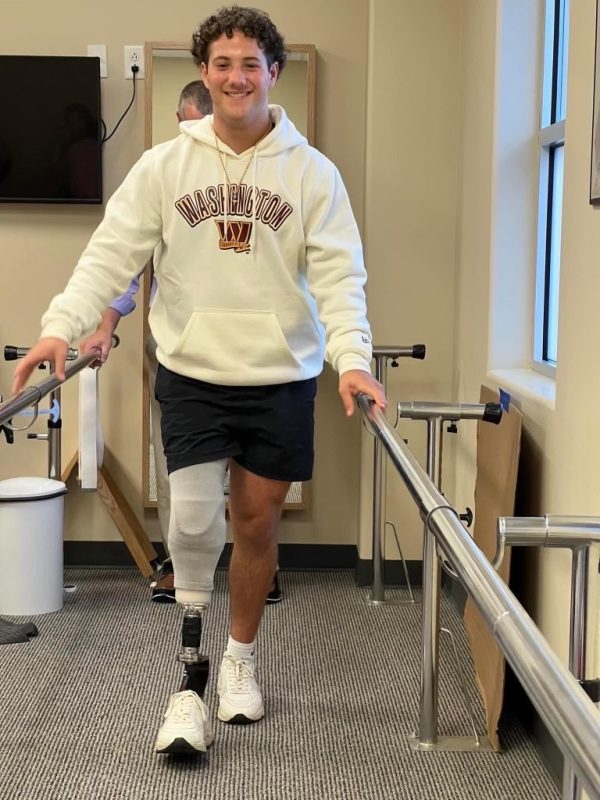 For months after the accident, Parker’s silver walker helped him get around. On a warm fall afternoon, Parker reclined and relaxed in the living room of a rental home in Greenville, bickering with his 16-year-old sister, Gracen. She poked fun by saying, “Be quiet before I take you outside and push you over.” The entire family laughed. The Byrd family is very close-knit, but the hospital restrictions kept them from being together as much as they’d hoped.

Jeff and Mitzi said, at first, Parker’s days were weary, a mixture of good and bad. After being released from the hospital, the good days became more frequent. The worst days were the ones spent in the ECU Health Medical Center ICU. Parker was isolated to four walls and allowed two visitors per day but only one at a time. So Jeff and Mitzi alternated visiting with Parker each day.

Parker describes his time in the ICU as “terrible” — simple as that. Jeff described how hard those days were for his son. “It was weird because the TV would be on but there was no sound,” Jeff said. “He loves music, but he never played music. We really sat there for three weeks really in silence.”

Once Parker was transferred to a different unit, the hospital wasn’t as strict about the number of visitors. He was allowed to have four people visit, with two at a time in the room. Parker was told to make a list of the four people he wanted to visit him. On that list were his mom and dad, Gracen, and Parker’s girlfriend, Alaina.

One day, while they were sitting in the ICU, Jeff looked to Parker and asked, “Hey Parker, if you could do anything, what would you want to do?”

Jeff figured Parker would say he would go hit baseballs — because that’s all he ever wanted to do — but he didn’t mention baseball at all. Instead, Parker responded, “If I could feel the sun on my skin. …If I could see my little sister.” Parker’s youngest sister, Brinley, wasn’t allowed in the hospital because, at 10 years old, she wasn’t old enough to meet the hospital’s visitor policy. Parker and Brinley went two weeks without seeing each other — the longest they had ever been apart.

In the Fall 2022 semester, Parker was enrolled as a part-time student, taking only a couple of classes. Following his release from the hospital, Parker was juggling doctors’ appointments, surgeries, physical therapy and schoolwork. Still, he made time to get to the baseball field to watch practice. Parker had physical restrictions for some time, but Mitzi says he made sure to be at pretty much every fall practice and team meeting.

We ambushed @parkerbyrd11 while leaving his appointment tonight!

A lot more wanted to come, but had a scheduling change!

Everyone here sits out in The Jungle!

We loaned him a megaphone to help him remember:

“We are ALL cheering you on”

After such a traumatic accident, Parker finds joy in knowing that he is an inspiration to the community — not only the Greenville and Laurinburg communities, but also for baseball programs across the East Coast. He is grateful to have had such a positive impact on people of all ages.

“There have definitely been many moments that kids have made me feel like a hero,” Parker said. “I take pride in being a hero for the younger generation, because I can remember myself as a kid looking up to older players and wanting to be like them.”

Parker hopes to be an inspiration for kids with amputations who might not have the support that he had after his accident.

The impact became clear when a prayer vigil was held in honor of Parker, shortly after the accident when he was still in the hospital. The vigil led several people to come to faith in Jesus Christ. Parker was taken aback, and this was the moment when he realized the influence his loss could have.

merry christmas to all. give all the glory to god!

The Byrd family often mentions the power of prayer when talking about Parker’s story. Parker, Mitzi and Jeff knew that a tremendous number of people were praying for Parker, but it was in one moment that they knew the prayers had been answered. Initially, the amputation was just below the knee, but the doctors still weren’t sure they could save Parker’s knee. The muscles there are what allows someone to have complete mobility of the leg. It wasn’t looking good, but the prayers were answered. Parker’s knee started healing, and amputation above the knee wasn’t needed.

Parker said God truly shined through answered prayers during his weeks in the hospital, as well as when he was released.

“He is the reason I am here today,” Parker said. “God definitely chooses people to shine His light through, and I am honored that I get the chance to share His light.”

Parker wants to use his journey as a way to bring others closer to Christ.

Parker won’t be taking the field to play this season, but he will be supporting his teammates from the dugout. And Pirates fans are still eager to see No. 16 in Clark-LeClair Stadium. Jeff said “We’ve cried a million tears and he’ll say ‘Dad, I’m playing again. …Why do you stress? I am going to play again.’”

Parker recently received his prosthesis and is planning to be back on the field as soon as he can.