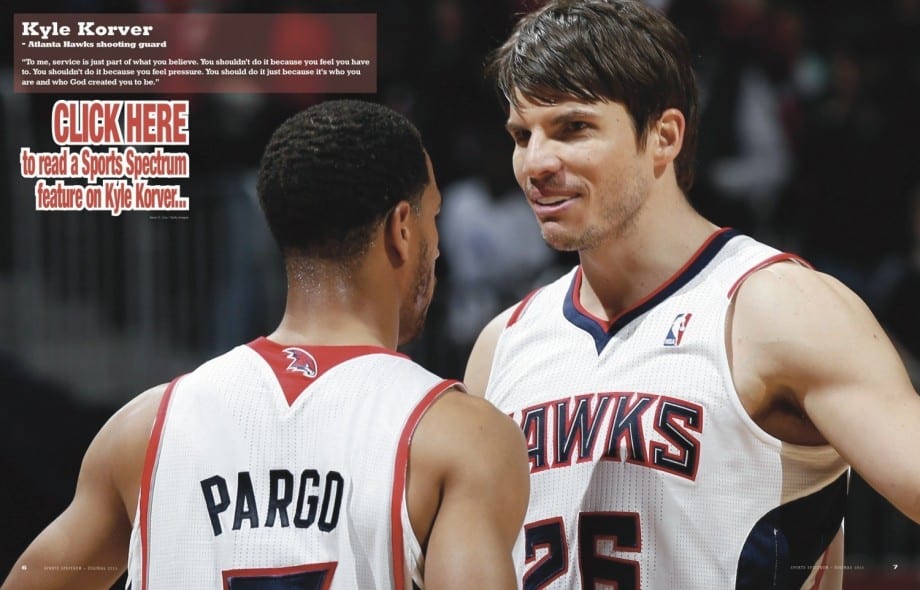 The filth and stench of the city was overwhelming. Little boys ran naked through the alleys. A slum-dwelling mother bathed her child under a small, open-air faucet. A grown man stooped over to brush his teeth with his finger, sand and street water.

These were just a few of the shocking images NBA star Kyle Korver witnessed during a trip to Calcutta, India in July 2008. Korver’s visit was a personally financed stopover that preceded his arrival in New Delhi with the NBA’s Basketball Without Borders program.

But no memory of that trip is more vivid than a few simple photographs. While visiting the former home of Mother Teresa, Korver marveled at posthumous pictures of the great humanitarian’s feet.

“They were so mangled,” he recalled. “Shoes over there are hard to come by, and she always said she couldn’t wear better shoes than the people she was serving. So she’d take the last shoes.”

Korver is a man whose acute compassion provides a stark contrast to the narcissism so prevalent in his profession. If the NBA featured a Benevolence All-Star squad, Korver, 28, would be a first-team starter. The Utah Jazz’s 6-foot-7 swingman, a six-year veteran, doesn’t just write indifferent checks to charities, like tossing meat to a hungry mutt. He seeks out the doghouses of the world, ready to get dirt under his millionaire fingernails while helping the needy.

Korver’s caring heart was cultivated long ago on the violent, rundown streets of Paramount, Calif. As a young boy growing up in a family of pastors, he joined his dad, Kevin, on Saturday cleanup projects around the city. By 1988, Kevin’s “Lookin’ Good” program – which he ran with the help of the family’s church, Emmanuel Reformed, and city officials – won national recognition.

After a draft-day trade sent Korver from New Jersey to Philadelphia in 2003, he fully committed himself to Christ during his rookie season and quickly started reaching out to kids in the central Philadelphia projects. He and a friend, Adam Bruckner, started a Bible study for inner-city kids at a local homeless shelter in April 2006. Soon, they had installed 14 basketball hoops and provided various supplies to many of the local schools.

Despite being traded to Utah in December 2007, much of Korver’s heart remains in Philly, where his foundation is helping Bruckner start an after-school program and renovate the 104-year-old shelter. Korver spends part of each offseason with the kids, many of whom have his cell phone number.

He has also purchased several vans for the Boys & Girls Club of Omaha, Neb., where he starred in college at Creighton, and donated plenty of desperately needed provisions to children in South Africa (medical/dental supplies) and India (5,000 pairs of shoes) through his Basketball Without Borders trips.

In Salt Lake City, his foundation is financing a contractor to perform home repair projects for struggling families. And his NBA-sponsored coat drives have collected several thousand winter jackets for needy children.

This story was published in the Summer 2009 issue of Sports Spectrum magazine.