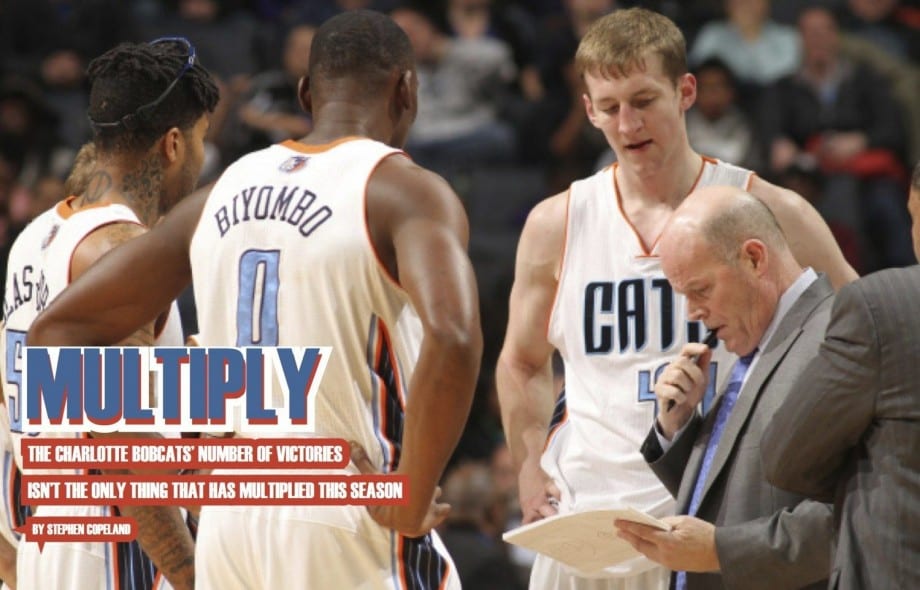 If there is one word that describes the 2013-14 Charlotte Bobcats season, it’s this: multiply.

Two seasons ago, they won seven games (during a lockout-shortened 66-game schedule). Last season, they won 21 games (of 82). This season, they finished with 43 victories (in 82 games), six times their amount of wins in 2012 and double the wins from a season ago.

They’ve gone from the punch line of jokes on sports talk shows across the country to becoming a serious threat around the league, as they went on a 20-9 tear after All-Star Break and defeated some of the NBA’s best teams, in part because of a stifling defense that allowed the fourth fewest points in the league.

One year before Charlotte reclaims its “Hornets” name, the Bobcats have already created a buzz in the Queen City, advancing to the NBA Playoffs for the first time since 2010. No matter what transpires in the 2014 postseason, it’d be foolish not to recognize the breakthrough season the Bobcats have had merely two years after finishing with the worst winning percentage in NBA history.

But their number of victories isn’t the only thing that has multiplied this season. The stories of three newly acquired Bobcats players—Anthony Tolliver, Cody Zeller, and Luke Ridnour—can teach us about multiplication in a different realm.

Anthony Tolliver was on the Bobcats plane one evening when a teammate asked him about the book he was reading. Tolliver told him that it was a book called Multiply by pastor and renowned speaker Francis Chan. His teammate expressed interest, and the two of them started meeting together on road trips to talk about the concepts in the book.

Other players noticed the two of them meeting and asked if they, too, could join. Before Tolliver knew it, his little conversation on the plane had turned into a seven-person Bible study that met in hotel rooms on road trips. The title of the book Tolliver was reading couldn’t have been more ironic.

“God literally used the title and meaning of the book,” Tolliver laughs. “The book is about discipleship and teaching other people about the Lord—so it couldn’t get any more direct. I was like, ‘Wow, this isn’t me.’ It’s funny because I always looked at myself as someone who doesn’t know a lot, but there are always people who don’t know as much as you do who you can help.”’

Tolliver, who has bounced around between six NBA teams in six seasons and has experienced inconsistent playing time this year with the Bobcats, has been reminded this season that, no matter what his circumstances might be on the basketball court, God still may have him in a specific place at a specific time for a purpose. All he has to do is look around any given Bible study he is leading to realize that.

“It’s one of those things that is kind of surreal—to think that these guys are listening to what God might say through me,” Tolliver says. “It’s crazy. It’s not something I’ve done before. It’s out of my comfort zone.

“Every time I think about that, I’m like, ‘Yeah, God is always going to put you where you are supposed to be. I’m always going to be in the right spot. If I play a lot or don’t play at all, it will still lead me to my next journey and next place.”

Amidst the challenges facing Tolliver on the hardwood, he positioned himself before the Lord, and God used him in a way he never imagined and multiplied it.

For rookie Cody Zeller, this season has been an exciting season, but also a transitional one, as he turned professional after his sophomore year at Indiana University and was drafted by the Charlotte Bobcats fourth overall in the 2013 NBA Draft.

In an instant, his life and surroundings changed.

“College is a lot of fun, but now you’re playing basketball for a living,” Zeller says. “I had to pick up my concentration and focus playing against the best players in the world every day, whether that’s back-to-back games or four games in five nights. I think that’s been an adjustment for me. In this league, it’s more of a job, and they can always find someone else to do it. I feel like I’ve grown up a lot this year.”

Zeller is naturally a go-with-the-flow type of person, anyway, but his transition into the NBA was also made easier by the ingredients in Charlotte.

“I think it’s uncommon to have as many believers as we have on the team,” Zeller says. “That’s definitely made it a lot easier. On other teams, I might have to look elsewhere for close friends or guidance on different things. We have a great group of guys, and that has made the transition a lot easier on me.

“The other thing about the Bible studies we have is that it’s fun because a lot of us come from different backgrounds. Different ages. Different homes—one might have grown up in the city, another might have grown up in the country. Some might have come from single-parent households. Others might have had two parents. Luke (Ridnour) is in his mid-30’s. I’m 21. Al has a little kid. Our discussions are really good because guys are in different points in their lives, have been brought up different ways, and are in different phases of their walks with the Lord.”

NBA Hall of Famer and Charlotte native Bobby Jones has also had an impact on Zeller in his transition. Whether it’s offering guidance with the NBA lifestyle or simply playing Ping-Pong at his house, Jones has become a spiritual and professional mentor for Zeller, inviting him to his house at least once a week.

“He is so low-key that you would never think that he was an NBA Hall of Famer,” Zeller says. “He lives out in the middle of nowhere on a dead-end street, and it’s very humbling talking to him because he is so down to earth and never makes a big deal out of anything. He is a great Christian man, and he’s had a big impact on me.”

Jones’ influence and humility, perhaps, has been a reminder of the importance of slowing down, especially in the helter-skelter lifestyle of an NBA basketball player, where wealth, power, and fame are at one’s fingertips.

“I have more time to study and more time to pray,” Zeller says. “It’s kind of cool because a lot of times on plane trips, I can’t sleep after just getting done playing, and I find it really peaceful for me. It’s dark on the plane and a lot of guys are doing their own thing. I read the Bible app on my phone, and I throw on some music. Since you can’t get service in the air, you don’t receive any texts, or get on Facebook or anything else like that. It puts me in the right frame of mind, whether I played well that night or played bad that night. It reminds me what is most important in life—my relationship with the Lord. That is my routine now.”

Amidst the transition—a new city with a new lifestyle and new responsibilities—Zeller positioned himself before the Lord, and God brought people and scenarios around him in ways that he never imagined—multiplication. Through teammates. Through an ex-NBA player. And through hanging out with God in the dark cabin of an airplane.

One player’s story that is oddly similar to the Bobcats recent history is that of Luke Ridnour.

Before his arrival in Charlotte, Ridnour had been to the playoffs only twice in 10 seasons: once in 2005 with the Seattle Supersonics where he spent his first five seasons, and again in 2010 with the Milwaukee Bucks where he spent the next two seasons.

Ridnour was then traded to the Minnesota Timberwolves where he, like the Bobcats, experienced the frustrations of season after season when the losses significantly outnumbered the wins. The Timberwolves finished 17-65 in 2011, 26-40 in 2012, and 31-51 in 2013. In the offseason, Ridnour believed it was a positive sign that his old team, the Milwaukee Bucks, decided to trade for him with the intentions that he could help them make a playoff run in 2014.

When their season began with an abysmal 3-15 start, however, and a 9-43 record before the All-Star break, Ridnour saw his minutes slip as the Bucks began to invest more in their younger players. The experience was a continual mental battle.

“It was a tough situation of me being a veteran, wanting to get to the playoffs and win and play, and none of that was happening,” Ridnour says. “It made me really focus on God and not the circumstances. It really affects who you are, your character and what you are doing. My wife really encouraged me that I’m just not here to play basketball, but I’m here to be a light and represent Him.”

Of course, by the time the All-Star break rolled around, it was the Charlotte Bobcats who were trading for him.

“When I was in Milwaukee, I felt like it was a test for me to stay positive and stay encouraged and still be a light in a tough situation basketball wise,” Ridnour continues. “I was able to do that, and I look back on it and I think God kind of rewarded me or honored me and brought me to a place with a playoff team. I think God is always watching to see if you give Him the little situations and if you honor Him still when it’s not going well. That’s what I kind of feel like this year has been for me. It’s been exciting to be able to go from that…It’s my 11th year, so to be able to play in the playoffs is fun.”

Amidst the discontent and feelings that he was running out of time, Ridnour positioned himself before the Lord, and God brought him to a place he never imagined, multiplying his wins, minutes, and influence.

And after that, it’s just simple math.