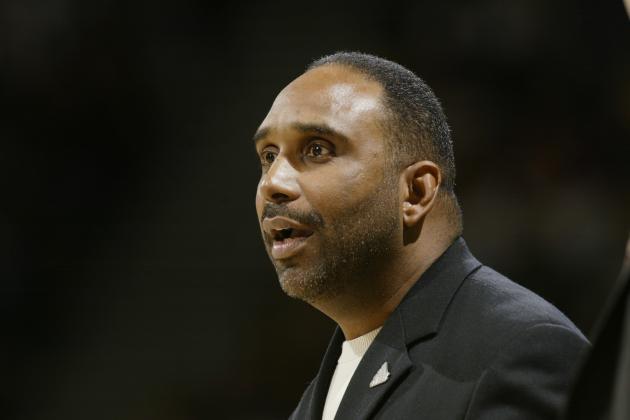 Coach Dru Joyce II went from being a salesman to one of America’s most successful high school basketball coaches and mentor to hundreds of young men, including LeBron James. As head coach at St. Vincent-St. Mary in Ohio, he has won a national championship, three state championships, and been named the National Coach of the Year. He has written a new book, Beyond Championships: A Playbook for Winning at Life, with a foreword by LeBron James.

BRYCE JOHNSON: I am so fascinated that at one point you were a salesman and that you ended up becoming a coach. How did you originally get into coaching?
COACH JOYCE: Like most dads who had a son who loved the game of basketball, I just wanted to help him achieve his dream to play the game. He wanted to play at a Division I level, so I had an opportunity to coach him first in a rec league in the city of Akron, and that led to coaching an AAU travel team. Those guys were pretty good, and ultimately got me an opportunity to be an assistant coach at St. Vincent-St. Mary high school for their sophomore year. Then, as they went to their junior year I became the head coach—just ending my 14th year.

BRYCE JOHNSON: During part of your career you were able to coach LeBron James. When you were coaching him, to what extent did you realize you were coaching a player that would one day be at this level?
COACH JOYCE: I knew that as a young kid he was very talented, but did I understand and know that he would be the best player on the planet? No! I wish I had that kind of foresight, but honestly I didn’t. I did recognize his thirst for understanding the game, and his work ethic as a young kid. From the age of 10 all the way through high school, he missed one practice. He came to practice hurt, he practiced sick. Whenever the ball bounced, he was there. When you have that kind of passion, it leads to great things. That’s why he is the successful player that he is today because he recognizes that there are no short cuts and you have to put in the time and do the work.

BRYCE JOHNSON: When thinking about your relationship with LeBron James, how has your life changed because of knowing him and how did you change his life?
COACH JOYCE: Early on, he was probably blessed by the association with me and the other coaches around me because we wanted to live a Christian example in front of him. LeBron was very observant. He was watching us, and took note of the things we did—how we handled ourselves on the sidelines and with our wives, and how we were family men. He got to see how a husband and father were because he didn’t have that example. As far as the blessing I’ve had by being involved with him, I will probably be forever known as LeBron James’ coach. He has graciously allowed me to use his name to build a business around basketball that allows me to continue coaching high school basketball, which he knows is my passion and love. He recognizes that using his name can help other young men.

BRYCE JOHNSON: In your book you teach principles that work on the floor, but more importantly off the court as well. As a high school coach wanting to teach kids these life lessons, how have you been able to incorporate your faith?
COACH JOYCE: It’s more important that you live it. I can sit them down and talk about being a servant, but I think they understand it better when they see me serve.

BRYCE JOHNSON: LeBron wrote in the foreword of your book that the principle which impacted him the most was always having the heart of a servant. How have you seen him live that out?
COACH JOYCE: You see it on the court. Being a great teammate, you’ve got to serve —be willing to pass up an opportunity for your teammate to have a better one. Off the court he helps kids realize they don’t have to be a basketball player to have a successful life, but that they need to nurture whatever their dream is. He’s helpful with that process.

BRYCE JOHNSON: LeBron shows an act of service on the court and it’s great to hear what he’s doing off of it, as well. I wish you the best with your book and continued success as a coach and mentor!

This column was published in Sports Spectrum’s Summer 2015 print issue. Log in HERE to view the issue. Subscribe HERE to receive eight issues of Sports Spectrum a year.