Five crimson banners hang in the rafters on the south end at Assembly Hall, the famed arena of the Indiana Hoosiers in Bloomington, Indiana.

The banners represent the institution’s handful of NCAA men’s basketball national championships (1940, 1953, 1976, 1981, 1987). The banners celebrate history but also set high expectations for the future; they are beautiful and adored but are also lusted after by a million sets of eyes every fall and winter.

The demand for success at Indiana is as high as those five banners. It is good to expect greatness, but it can be maddening to be imprisoned by expectations. Some might say that Hoosier Nation swings back and forth between the two like a pendulum.

Indiana University head coach Tom Crean stands amidst the noise—the swinging pendulum—with the future of Hoosier basketball on his shoulders.

If Tom Crean’s eight years at Indiana were a roller-coaster ride, surely he’d have an ear-splitting headache and whiplash by now.

Crean inherited a shattered Indiana program in 2008 in the wake of a number of NCAA sanctions inflicted upon the Hoosiers by former head coach Kelvin Sampson. After taking Marquette to the NCAA Tournament in his five seasons with the Golden Eagles (including a Final Four appearance with Dwyane Wade in 2003), Crean was forced to build Indiana from the ground up. In his first three years, the Hoosiers only won eight Big Ten games. 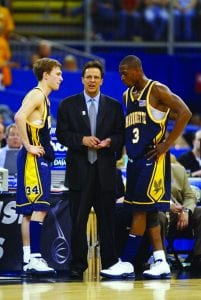 “It was hard,” says Tom Crean’s wife, Joani. “You are used to winning 23 games (at
Marquette), and then it is flipped—your end-of-the-season record is flipped. It was hard. What did we do? Why give that up? Why? Did we make a mistake? But then you just have to dig your heels in and realize there is a plan that is greater for you…You just have to keep on plowing on.”

The floodgates finally opened for the Hoosiers in 2012.

Crean landed Indiana’s biggest recruit since the Sampson era—McDonald’s All-American and Indiana Mr. Basketball Cody Zeller—and Indiana finished the season with a 27-9 record, a momentous win over their arch-rival, No.1-ranked Kentucky, and a Sweet 16 appearance.

In 2013, Indiana earned its first No. 1 seed in the NCAA tournament in 20 years and won the Big Ten regular season title outright for the first time in 15 years.

Amidst the departure of four 1,000-point scorers (Victor Oladipo, Cody Zeller, Christian Watford, and Jordy Hulls), the Hoosiers missed the tournament in 2014. Two off-the-court, drug-and-alcohol-related incidents by Indiana players in 2015 (which one could argue had nothing to do with Crean) also led to negativity among pundits and fans in Hoosierland.

In an effort to quarantine himself from the noise and negativity brewing on the internet, Crean stopped getting on Twitter (he hasn’t tweeted since November 2, 2014). He created boundaries. 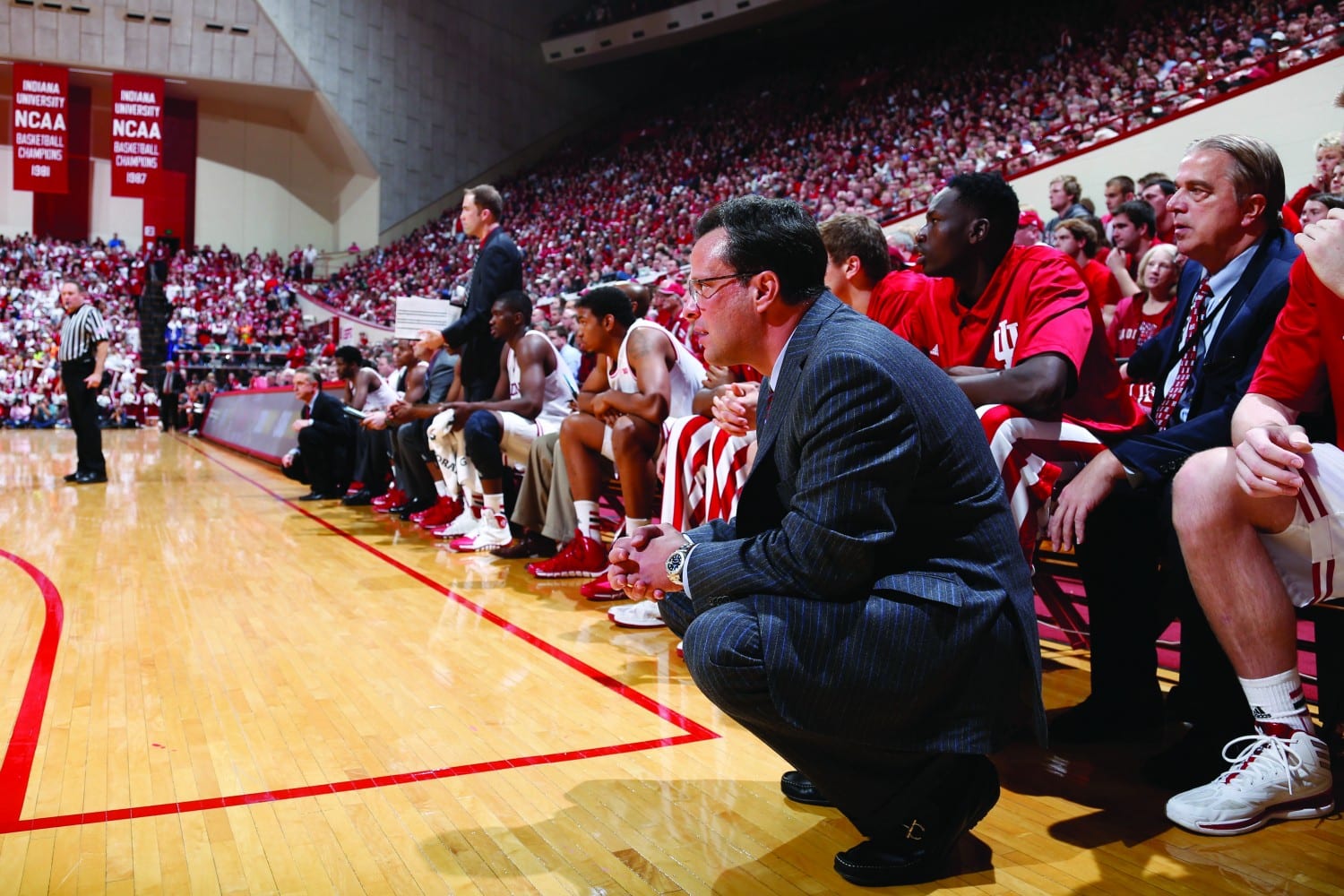 “When he got on Twitter originally, he wanted to encourage people and help shape people,” Joani says. “He’s recently gotten away from that. It’s kind of a hateful world, Twitter.”

But sometimes the noise was impossible not to hear.

Especially when it involved his family.

His daughter, Megan Crean, a student at Indiana, once listened to a professor of hers announce to the class on April 1 that “Tom Crean was fired this morning,” as the class erupted into wild applause. “April Fools!” the professor exclaimed.

What would it be like to hear your classmates (and apparently an Indiana profes-sor) find joyful amusement over the idea that your father lost his job?

Another time, in March 2015, Crean and his wife Joani were at their son Riley’s high school basketball game when “Tom Crean sucks!” chants suddenly filled the gymnasium.

This is Tom Crean’s life in Indiana. Lots of noise. And not all of it is avoidable.

What makes Crean’s interview with Sports Spectrum at the 2015 K-LOVE Fan Awards in early June (before the Hoosiers’ 2015-16 season) especially insightful is the fact that his comments come from a man who was in the middle of a storm—when perspective is needed the most but also easiest to lose.

It takes perspective not to drown in the noise. 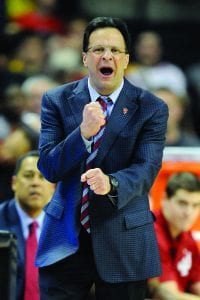 Two weeks before the Fan Awards, a photograph was taken of Crean squatting next to two people in a parking lot in Bloomington, giving them food and a Bible. The bystander who took the photo and posted it online said that Crean talked to the two people for 15 or 20 minutes. Of course, Crean never intended for the picture to be captured and bounced around the Internet. But it did. And in a sense, maybe the picture represented so much more about who Crean was. He was more than the coach of the Indiana University Hoosiers. He was a father. A husband. A mentor. A real person who loved loved real people.

Many stories like this about Crean have come across Sports Spectrum’s radar. Some have been shared privately or asked not to be printed by a source. For Crean, it’s not about being recognized for the good he’s done. It’s about being an extension of love to others.

“Tom has an empathy that is far different than a lot of people,” Joani says. “I am always totally amazed that A) He remembers everyone, and B) His ability to put himself in that moment. He is really in that moment.”

Maybe there are some things that are bigger than basketball.

Perspective is not something you are born with. It’s something that is developed.

Though Crean has learned to drown out the unnecessary outside noise over the years, one thing he does listen to is his inner dialogue. His wife says that he is as introspective as they come. He is a sponge. Always learning. Always reading. Always applying something new. 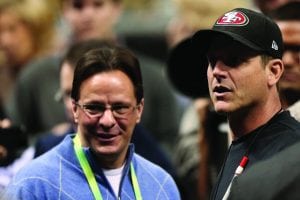 ough wise counsel with loved ones—frequent conversations with Joani’s brothers, Baltimore Ravens head coach John Harbaugh and University of Michigan head football coach Jim Harbaugh (“They talk more than I talk to them,” Joani laughs.) Sometimes it’s through biblical truth—in the weekly coaches’ Bible studies, in Crean’s office, which Crean implemented. Sometimes it’s through the gift of silence—sitting contemplatively in church each week with his family; Joani says that Crean will often drop their children off at school and then sit in church alone, mentally preparing for the day.

“He puts a lot of time into reading the Bible and reading about what he is called to do,” Joani says. “He puts a lot of time into wanting to know what he is supposed to be doing with the life that God has called us all to live. It’s just not spiritual, it’s everything. Business. Basketball. Leadership. Religion. If he thinks it’s going to help him, he’s going to read it and apply it. He’s good at reading something and thinking, ‘Hey maybe I can change and get better by doing this or that.’”

A person’s willingness to dive deeper within and focus on what he or she can control has the ability to soften the blaring noises in this noisy and chaotic world. Realizing that there are bigger things in life than whatever it is in this world that attempts to define us can lead to freedom and peace. And for Crean, it has.

Says Joani: “There are people that depend on him: players, players’ families, coaches, coaches’ families; there are a lot of people that look to him to make every situation right. If you don’t have a foundation or a balance or something to go to as your platform or something that you stand on every day, it makes the job that much harder.”

Judging by the Hoosiers’ difficult start to their 2015-16 campaign, many on the outside believed—at the time—that the season might be Crean’s last with the Hoosiers.

Despite a No. 15 ranking in the Associated Press preseason poll, the Hoosiers suffered two major upsets in the Maui Invitational to Wake Forest and UNLV, both of which were unranked. With an opportunity to rejuvenate the spirits of Hoosier Nation against the defending NCAA champions—No. 7 Duke University—on ESPN, the Hoosiers faltered again, this time in an embarrassing 94-74 loss to the Blue Devils.

But that’s when Crean, his staff, and his players demonstrated what perspective and deafness to the noise can produce.

Indiana won its next 12 games, including its first seven in Big Ten Conference play, one of the most competitive conferences in the country.

IU went on to win the Big Ten regular season title outright with a 15-3 conference record, the first time since 1983 that an IU coach has won two outright titles in four years.

Upon securing the title, an emotional, teary-eyed Crean told his players in the locker room: “…At the end of the day, you go back to this year and understand that all that matters is your faith, your belief, your family and looking around at each other and absolutely understanding that together you’re capable of so much…Don’t ever, ever, let anybody take away your nerve, take away your spirit, put doubts into your minds and heads that you can’t do things.”

In the postseason, IU advanced to its third Sweet 16 in five years before falling to the No.1-seeded Tar Heels of North Carolina. Crean’s coaching, despite a slow start and key injuries to his team throughout the season, resulted in him being named Big Ten Coach of the Year, his first time receiving the award in his career.

But for Crean, as momentous of a year as it was, it all comes down to perspective—in the highs and in the lows. Perspective produces resiliency and a steady mentality. And his perspective is molded by his faith.

“The more you worry about how you feel as a coach or how you feel about the struggles, the more you lose sight of what’s most important, which is the people around you and not letting adversity knock you down, not letting struggles take away, but also not letting success build you up into something away from what it is,” Crean told Sports Spectrum. “The Bible can put you on such a clear path that no matter the ups and the downs, you stay absolutely focused on what is most important.

This story was published in Sports Spectrum’s Spring 2016 print magazine. Log in HERE to view the issue. Subscribe HERE to receive eight issues of Sports Spectrum a year.