Tonight, Gonzaga and North Carolina will battle for the right to be called College Basketball’s National Champions.

Wayne Simien knows that feeling all too well. 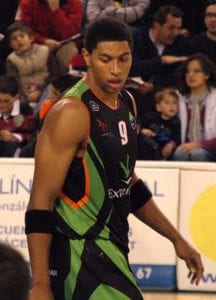 In 2003, Simien was a sophomore forward for the Kansas Jayhawks and part of a team that made it all the way to the National Championship game. Wayne was injured and not able to play, but he was there. He was on the bench. He watched what it was like to be this close to a National Championship. Unfortunately, his team fell three points short, and lost to Carmelo Anthony and the Syracuse Orangeman 81-78.

Simien would play two more seasons at KU and finish out an outstanding 4-year career by winning the Big-12 Player of the Year in 2004-05. (In 2011, his jersey was retired by the Jayhawks) An NBA career seemed like Simien’s next step. In June of 2005, Simien was a first-round draft pick by the Miami Heat (29th overall) and seemed destined for a long professional career.

But God had other plans.

In 2006, Simien was a part of an NBA championship team with the Heat but just 2 years later, his NBA career was over. He would play professionally overseas and then in 2009, at the age of 26, he retired.

It was time to fulfill another calling.

In 2003, Wayne began his walk as a believer in Christ after campus ministers reached out to him and introduced him to the gospel of Jesus. From that day forward, Simien’s goals changed from self to others. He began to pour himself into people and wanted to make a difference in people’s lives.

After his career was over, he returned to where he played four years of college basketball in Lawrence, KS. He and his wife Katie, started a non-profit ministry with a mission to help young people discover, build, and start living a life of greatness. The ministry’s name should come as no surprise: Called to Greatness.

Called to Greatness Campus Ministries seeks to train and equip college students to advance the kingdom of God in all areas of life. Whether you love the arts, economics, athletics, business, engineering, politics, education or something entirely different, God wants to empower you in your gifts and calling to be a part of His master plan.

We exist to help college students discover their calling and train them to live a gospel-centered life. We desire for a generation of students to encounter the living gospel of Jesus Christ and be transformed in heart, mind, and spirit so they might reach the nations and glorify God with their lives.

“As I transitioned out of basketball, I was ready to embrace the new stages of life,” Simien told Premier Sports. “Husband, father and campus ministry – that’s what I had a heart to do. I get the chance to be on a college campus every day, helping mentor students to discover greatness in life.”

Tonight, as you watch the National Championship and cheer on your favorite team, think of Wayne Simien. Think about the impact he’s made on the lives of others and pray for every player on that court tonight that they would go on to have impactful lives, making a difference in the people they come in contact with each day. Because that’s what Wayne Simien is doing.