It was redemption for the Heels after losing the National Championship in 2016 on a buzzer-beating three-pointer to Villanova 77-74.

Justin Jackson has been the top player all season long for UNC, leading them in scoring and winning the ACC Player of the Year award.

Monday Night, Jackson scored 16 points to go along with 4 rebounds, and 3 assists. He struggled from outside going 0-9 from three-point range but Justin had the last laugh as his go-ahead 3-point play with 1:40 left helped wipe away a year of heartache in bringing his team a championship.

Jackson is a believer in Jesus Christ. His twitter page says “l’m a Christ follower who’s in desperate need of my Savior, Jesus Christ each and everyday.”

WALKING with God isn't easy or comfortable, but it's worth it!! #ThankYouLord

Justin spoke to the media prior to Monday Night’s championship game about how important God is to him. “My faith is the biggest thing for me. Basketball will fail you. Everything else in life in my opinion will fail you,” says Jackson. “I say a prayer before every game and it’s always God’s will. That’s why I wrote it on my shoes to remind me.”

Jackson was the unique high school basketball player that didn’t belong to a high school. He was homeschooled by his family and played hoops under coach Mike Decker for the Homeschool Christian Youth Association Warriors in Houston. He was a Parade All-America and second-team USA Today All-America, playing in both the McDonald’s All-America Game and Jordan Brand Classic.
Justin Jackson’s next step is to decide if he’s ready to play in the NBA. Many scouts have him projected as a top-20 pick but he still has one more year of eligibility remaining, should he want to choose and return. 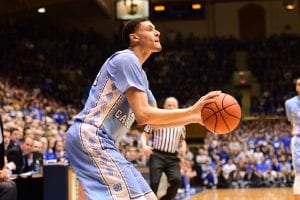 No matter what happens next, Jackson knows that his purpose and his future is in the hands of the one who created him. It’s God’s will.

God is ALWAYS in control!! #KeepChugginAlong