By Jason Romano Aug 14, 2017
"God and Starbucks" by Vin Baker is published by Amistad/HarperCollins and is on sale now.

Vin Baker had it all.

He was a first round draft pick (8th overall) in 1993, a 4-time NBA All-Star, an Olympic Gold Medalist, signed an $80 million contract, and was on top of the world as a budding basketball superstar.

But as quickly as he reached the top, Baker fell and fell fast. The fame and fortune that had seen him accomplish everything the world could offer, would suddenly take a turn down a very dark path.

He lost it all. His basketball talent, his reputation, his $100 million fortune, all of it. 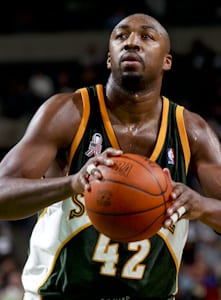 During this downward spiral, Vin became an alcoholic, drinking not only with teammates, but first thing in the morning, during practice and even at games. This would eventually lead Vin to diminishing skills, a withered body and lost without any hope.

In his new book “God and Starbucks,” former NBA superstar Vin Baker shares the story of his fall from grace, and how hitting rock bottom and losing everything, actually turned into a blessing as Baker rededicated his life to God and began the process of restoration in Christ.

“I knew how much damage I had done to my body and and mind,” said Baker in his book. “Drinking had destroyed my foundation. I knew that I had no shot at rekindling a relationship with God unless I healed my mind and body.”

Baker says checking himself into rehab in 2011 and getting sober was the only way that he could have a restored relationship with his creator.

“That’s why it was so important for me to get into rehab: not as a long-term fix,” writes Baker, “but as acute care. Getting sober was just a part of the bigger picture, which was getting closer to God and restoring my relationship with Him.”

After getting sober and physically free of alcohol cravings, Baker says he quickly became reconnected with his church and God. He says he became a fixture at Full Gospel Tabernacle in his hometown of Old Saybrook, CT and attended church on Sunday as well as Bible study classes each Wednesday Night.

“I tried to get to at least four church services a week in an effort to restore my relationship with Christ and with God,” writes Baker. “It’s strange — I had never been at a lower point in my life, and yet I was filled with hope and optimism.”

Baker says that despite his tumultuous past, he’s happy to say that he’s been sober now for over 6 years and says working at Starbucks and ministering to youth in his community has provided him with more security and happiness than all his years playing ball.

“I don’t know where this journey will take me next,” writes Baker, “but I have faith. I can feel in my bones that this is the right thing to do. I believe in my heart that basketball will provide a platform for not only taking care of my family and teaching the game I love, but also for serving God and my community.”

At 45 years old, Baker has many years left to continue to shine God’s light into the community and make a difference by serving others.