Matt Bostic is a teaching pastor at Centerpoint Fellowship Church in Montgomery, Ala. His job is to preach and teach God’s Word and help foster a body of believers to love and serve others.

But in late August, Bostic decided to take on a different challenge. A challenge nobody had ever accomplished before. A world record.

However, it wasn’t just any world record. It was the Guinness World Record for most 3-pointers made in 24 hours.

“I decided to break the free-throw world record because I love a new challenge,” Bostic told Sports Spectrum. “I had broken the 3-point record 10 years ago, but I wanted to see if I could make over 20,000 free throws in 24 hours.” 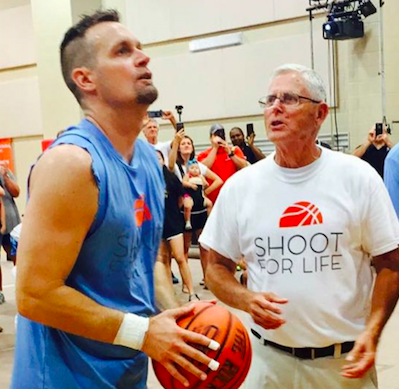 That record Bostic referred to was from 2006, when he set the world record for most 3-point shots taken in 24 hours: 6,323 baskets.

That record set in 2006 took its toll on his body. He lost his toenails, had bloody fingers and his entire body cramped up to the point that he couldn’t even sit up properly in his car.

This time around, in 2017, Bostic suffered some injuries after breaking the free-throw record, but it wasn’t nearly what took place in 2006.

“I couldn’t squeeze my right hand for three days,” Bostic told Sports Spectrum. “Twenty-thousand squats in one day puts a little stress on the ‘I band’ around the knee. I was extremely exhausted emotionally and physically. Unlike anything I’ve ever experienced.”

He broke the World Record in 21.5 hours with over 20,373 free throws! Pastor Matt Bostic – Shoot For Life Ministries! … and still going…

Trying to set a world record is lofty goal, but for Bostic, it was for a great cause and great purpose.

“My hope in breaking the record is to use the Guinness platform to share the hope of perseverance and life in Jesus,” Bostic said. “The Guinness Book of World Records is a great book to be in, but the Lamb’s Book of Life is the one we can all be in. It’s the only one that matters for eternity.”

Born and raised in Greensburg, Ind., Bostic played college basketball at Bryan College in Dayton, Tenn. While there, cancer took the life of his No. 1 fan — his mom Joanie.

Wanting to honor his mother, Bostic started a non-profit organization called Shoot For Life. Since relocating his family to Montgomery in 2006, SFL has worked in states across the country using various means — including his world record free-throw attempt — to raise money on behalf of cancer patients.

Matt also hosts a weekly podcast called “Strong to the Finish,” which can be downloaded from iTunes or found at www.sflministries.org.

SFL is now Shoot For Life Ministries and continues to use basketball to bless others and encourage people in the Lord.

For more info on SFL, check out its website.