Robert Covington exists outside “The Process.”

The Philadelphia 76ers forward isn’t a notable name just because he went from undrafted Houston Rockets castoff to NBA All-Defensive first-teamer. He’s a notable name because he’s also the Sixers’ longest-tenured player — an inexplicable diamond from the rough that was Philly’s abominable start-from-scratch rebuild.

Covington managed to survive the 76ers’ infamous overhaul after joining the team in 2014, and his reward was a vital role on a 2017-18 unit that showcased next-generation stars like Joel Embiid and Ben Simmons, ripped off a franchise-record 16 straight wins, and promised the makings of Philly’s most formidable basketball contender since the long-lost days of Allen Iverson.

Amid a two-game road trip and just a week after his team starred in the NBA’s 2018-19 season opener, Covington caught up with Sports Spectrum on a phone call about the Sixers’ title hopes, the toughest NBA players to defend, his bowling scores and the reason for his off-court focus on kids:

Sports Spectrum: Around the NBA, everybody mentions the Golden State Warriors and maybe the Boston Celtics, whom you just played, as the unquestioned best in the league, but where do you think the 76ers rank?

SS: How close do you think the Sixers are to winning a championship?

SS: Between you, Embiid, Ben, Markelle Fultz, JJ Redick, you already have lots of talent. But you played with Elton Brand, who’s now the Sixers’ general manager. Like Magic Johnson was able to lure LeBron James to L.A., do you think his connection to players in the game will help the team bring in more firepower down the road?

RC: Yeah, I definitely believe that. He sees both aspects of his job. He sees the business side, but he also sees the human side of everything. He’s going to be good.

SS: On a personal level, you said before the season you think you can be the best defender in the NBA. What makes your game stand out above all the others in the league?

RC: Man, I do all the things people don’t sit up here and speak on. I’m not caught up in the hype of the accolades. I just want to win. That’s what unique about me. I’m going to do whatever I can to make sure my team is doing well.

SS: The numbers do show that the Sixers defense is way better when you’re on the court as opposed to the bench. Do you have a sense of that when you play, that the team gets a boost when you’re out there?

RC: Absolutely. They see me doing what I’m doing as a defender. And I just want to be the best that I can be. I wasn’t always a defender like that, but it was something I worked at. It was a transition, for sure, but it’s cool to be a part of it.

SS: Who’s the toughest player you’ve ever had to defend?

RC: I would say James Harden. After him, of course a lot of the superstars are up there, but it’s always fun to go up against all them. It tests you as a defender.

SS: You’re also known for your 3-pointers, so if you could only pick one, would you rather make a clutch three or a clutch block?

RC: A clutch 3-pointer. I like both, though, so that’s a tough one. I’ve done both. It’s a tough call. Actually, maybe the block. Yeah. You’d have to flip a coin.

SS: Off the court, you were the first professional athlete to support the National Youth Foundation when it started in 2017, visiting kids for art and reading days, issuing the Robert Covington Award for kid-authored books on anti-bullying and promoting equality among youth. What drew you to this type of community service?

RC: Their whole message is inspiring, to hear they were trying to give kids an outlet. Bullying, that stuff is going on a lot. I don’t think people realize with a lot of these kids, a lot of depression comes from this stuff, and it needs to be talked about. We’re trying to show them it’s OK to talk about. 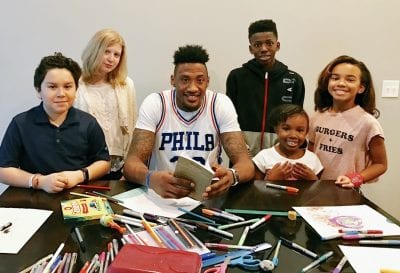 SS: The foundation also promotes kindness through programs like its Student Book Scholar Contest. Did you have any of your own experiences that inspired you to get behind it?

RC: I’ve experienced bullying as a kid. It was fourth grade. I was moving from the city where I was born (Bellwood, Ill.) to a whole different city, and you know, being a new kid on the block, people are going to sit up and measure you, and I was picked on a little bit because I didn’t know nobody. Me and my mom had a conversation and basically, she was like, ‘Look, just because you are different, you aren’t going to let nobody push you around.’ The next day, my mom actually got in a phone call and was told I had become a bully because I stood up to them. But it’s important to know you’re somebody.

SS: You’ve got the platform of a professional athlete now, so how important is it for you to be a role model there?

RC: Very. Especially for the inner-city kids, like here (in Detroit). It’s hard for them in a lot of cases. A lot of them are coming from single-parent homes, living with grandparents, and a lot of times they express they selves by using violence or bullying. We’re trying to make the change. 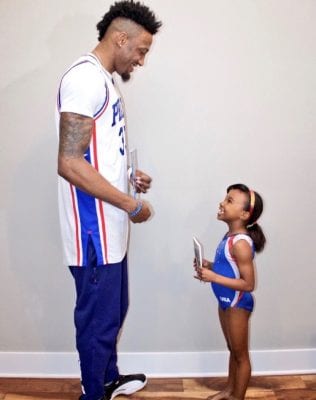 SS: On your Instagram page, you say you play in Jesus’ name. How does your faith influence how you carry yourself on the court but also how you serve the community?

RC: I just had talked to my girl not too long ago, and we were talking about how everyone has a purpose, and God puts you in this life, and He wants you to fulfill things to the fullest. Through that, I believe my purpose is helping to give back. That’s been my main thing. I do what I do for the kids, to give them an outlet, some enjoyment and also potentially change some peoples’ behavior for the better.

SS: You’ve partnered with Jordan Hicks for the foundation, and you’ve said his Philadelphia Eagles motivated the Sixers by winning the Super Bowl. How much does it inspire you to see those other athletes around the city, from Hicks to Carson Wentz, represent their faith and communities as much as their teams?

RC: Yeah, not a lot of people are capable of doing that. So seeing other athletes that are really big on a lot of important things, it’s a blessing to see those guys that are in that light that can sit up here and make change.

SS: You’ve also said you like to bowl when you’re not playing basketball. What’s the best bowling score you’ve ever had, and could anyone on the Sixers ever beat you?

RC: I was one point away from a perfect score. But that was when I was bowling more heavily back then, when I was more active. Could anyone ever beat me? No.

SS: Are you just as confident you have the best hair on the team?

RC: Oh, I definitely have the best hair on the team. The closest competition, I’d say, is T.J. (McConnell). He spends quite a bit of time in the bathroom. Markelle, with the dreads, he hasn’t decided just yet if he’s going to do them. He’s in that gray area still.

Covington and the 76ers return to Philadelphia for a Saturday night game against the Charlotte Hornets.

National Youth Foundation collaborates with NBA and NFL players to promote tolerance and equality through youth literacy programs, including the Amazing Women’s Edition Writing Contest and the Student Book Scholar Contest, which challenges children to create their own books.