This story appears in the Winter 2018 issue of Sports Spectrum Magazine. For more in-depth feature stories like this, subscribe to our quarterly magazine for only $18. 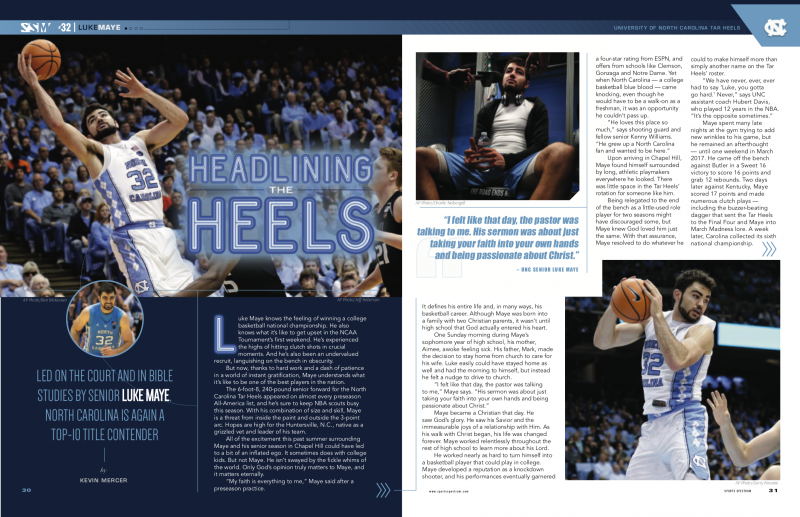 LED ON THE COURT AND IN BIBLE STUDIES BY SENIOR LUKE MAYE, NORTH CAROLINA IS AGAIN A TOP-10 TITLE CONTENDER

Luke Maye knows the feeling of winning a college basketball national championship. He also knows what it’s like to get upset in the NCAA Tournament’s first weekend. He’s experienced the highs of hitting clutch shots in crucial moments. And he’s also been an undervalued recruit, languishing on the bench in obscurity.

But now, thanks to hard work and a dash of patience in a world of instant gratification, Maye understands what it’s like to be one of the best players in the nation.

The 6-foot-8, 240-pound senior forward for the North Carolina Tar Heels appeared on almost every preseason All-America list, and he’s sure to keep NBA scouts busy this season. With his combination of size and skill, Maye is a threat from inside the paint and outside the 3-point arc. Hopes are high for the Huntersville, N.C., native as a grizzled vet and leader of his team.

All of the excitement this past summer surrounding Maye and his senior season in Chapel Hill could have led to a bit of an inflated ego. It sometimes does with college kids. But not Maye. He isn’t swayed by the fickle whims of the world. Only God’s opinion truly matters to Maye, and it matters eternally.

“My faith is everything to me,” Maye said after a preseason practice.

It defines his entire life and, in many ways, his basketball career. Although Maye was born into a family with two Christian parents, it wasn’t until high school that God actually entered his heart.

One Sunday morning during Maye’s sophomore year of high school, his mother, Aimee, awoke feeling sick. His father, Mark, made the decision to stay home from church to care for his wife. Luke easily could have stayed home as well and had the morning to himself, but instead he felt a nudge to drive to church.

“I felt like that day, the pastor was talking to me,” Maye says. “His sermon was about just taking your faith into your own hands and being passionate about Christ.”

Maye became a Christian that day. He saw God’s glory. He saw his Savior and the immeasurable joys of a relationship with Him. As his walk with Christ began, his life was changed forever. Maye worked relentlessly throughout the rest of high school to learn more about his Lord.

“I felt like that day, the pastor was talking to me. His sermon was about just taking your faith into your own hands and being passionate about Christ.” – UNC SENIOR LUKE MAYE 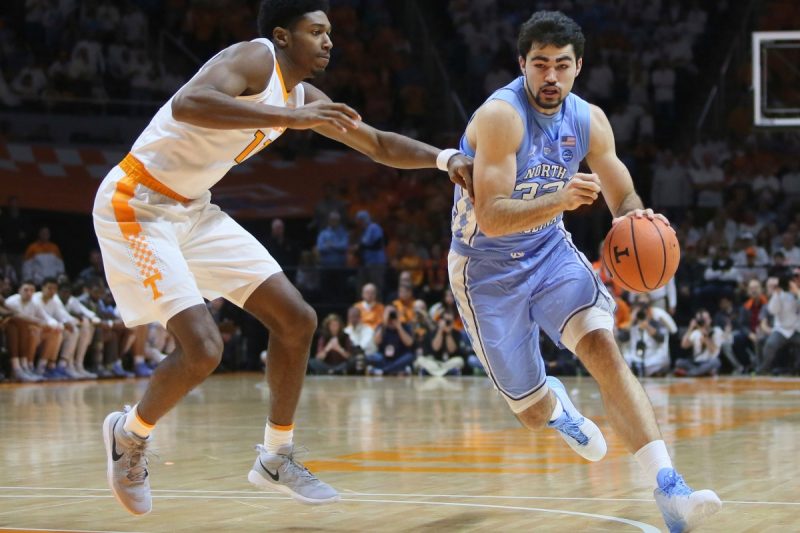 He worked nearly as hard to turn himself into a basketball player that could play in college. Maye developed a reputation as a knockdown shooter, and his performances eventually garnered a four-star rating from ESPN, and offers from schools like Clemson, Gonzaga and Notre Dame. Yet when North Carolina — a college basketball blue blood — came knocking, even though he would have to be a walk-on as a freshman, it was an opportunity he couldn’t pass up.

“He loves this place so much,” says shooting guard and fellow senior Kenny Williams. “He grew up a North Carolina fan and wanted to be here.”

Upon arriving in Chapel Hill, Maye found himself surrounded by long, athletic playmakers everywhere he looked. There was little space in the Tar Heels’ rotation for someone like him.

Being relegated to the end of the bench as a little-used role player for two seasons might have discouraged some, but Maye knew God loved him just the same. With that assurance, Maye resolved to do whatever he could to make himself more than simply another name on the Tar Heels’ roster.

“We have never, ever, ever had to say ‘Luke, you gotta go hard.’ Never,” says UNC assistant coach Hubert Davis, who played 12 years in the NBA. “It’s the opposite sometimes.”

Maye spent many late nights at the gym trying to add new wrinkles to his game, but he remained an afterthought — until one weekend in March 2017. He came off the bench against Butler in a Sweet 16 victory to score 16 points and grab 12 rebounds. Two days later against Kentucky, Maye scored 17 points and made numerous clutch plays — including the buzzer-beating dagger that sent the Tar Heels to the Final Four and Maye into March Madness lore. A week later, Carolina collected its sixth national championship.

In his typical “aw, shucks” attitude, Maye downplayed his role in the historic moment.

“(Teammate Theo Pinson) pitched it back and I was thankful it went in,” Maye said. “It was a great play and I wouldn’t have had the opportunity to do it without the confidence from my coaches and my teammate that I could knock it down.”

Maye knew better than to give in to complacency or the praise that comes with newfound celebrity. He was back in class at 8 a.m. the next morning, and back in the gym the next summer preparing for his new role in 2017-18 as the starting power forward.

“Luke is one of the hardest workers I’ve ever seen in my life,” Williams says. “He just goes after it relentlessly.”

Maye’s work ethic catapulted him into a successful junior campaign, when he averaged 16.9 points and a team-leading 10.1 rebounds per game. Throughout the season, he shared the spotlight with a decorated senior class, as the Tar Heels earned a No. 2 seed for the NCAA Tournament. After a disappointing second-round exit, though, the seniors graduated and Maye declared for the NBA Draft.

Yet as the draft deadline approached, he withdrew his name to return for his senior season. Maye opted to improve on his game and finish his college career on a better note. But it was more than simply a basketball decision. He knew the value of a college degree, what a gift college life is, and the lessons God could still teach him.

“I felt like having another year of college is something that you can’t get back,” Maye says. “It’s something that I’ve really wanted to finish and wanted to continue to grow as an individual before I have to make big life decisions afterwards.”

His announcement sent waves through the college basketball world as the Tar Heels skyrocketed into the preseason top-10 rankings. Maye is the centerpiece of a loaded North Carolina squad with three promising freshmen and a bevy of returning talent.

Williams has felt the impact of Maye’s return beyond the basketball court. He has another season with his roommate of four years, his best friend and his brother in Christ.

On Tuesday nights at 9 p.m., you’ll find the senior duo and roughly seven other teammates growing together in their faith at a team Bible study organized by Coach Davis and members from a local church. Every week, a different player leads the team through a passage and subsequent discussion. Last year, the focus was Jesus’ parables. This year, it’s Daniel.

“Really a huge reason why so many of the guys show up is because of Luke,” Davis says. “His leadership and his faith and the willingness to share his faith with his teammates has been really huge for this team.”

The UNC team Bible study began years ago and has only strengthened since. A number of strong Christians have come through the program and left their marks, including Davis, who returned to his alma mater to coach in 2012.

And the fellowship of believers on the Carolina squad extends beyond Tuesday nights. They’ve even started a group chat on their phones that’s active throughout the week. Davis or the players impart words of encouragement, or share further insight into discussions from the Bible study.

“Having a Bible study once a week has really been beneficial to growing us deeper as a team and individually,” Maye says. “That’s been really crucial for my development.”

In Maye’s busy schedule of classes, practices and media obligations, he makes time to study God’s Word on his own. He recently read through Proverbs and plans to start Ephesians or Philippians soon. Empowered by the Holy Spirit, he takes God’s Word to the world.

For Maye, the relationships he forms are opportunities for God’s Spirit to work in the lives of others. “Once I’ve built a strong enough relationship, [I have] that opportunity to really see where they are spiritually,” Maye says.

Maye’s recognizable face around campus often isn’t conducive for this type of evangelism, and, like any true Christ-follower, he doesn’t flaunt his faith for personal gain. Yet God has so shaped who Maye is that the evidence of Maye’s transformed heart is unmistakable in how he lives his life. Fame hasn’t changed him one bit. 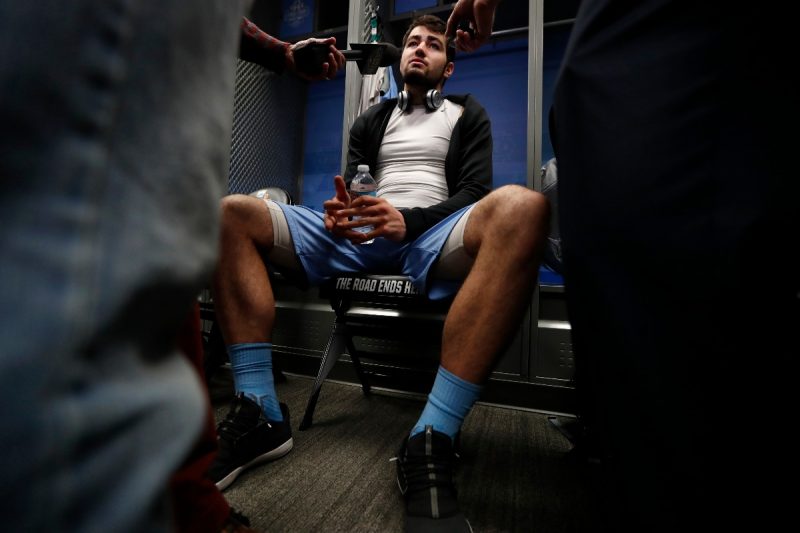 “His leadership and his faith and the willingness to share his faith with his teammates has been really huge for this team.” — UNC ASSISTANT COACH HUBERT DAVIS

“He’s the real deal,” Davis says. “He really is an example on the court and off the court, and you always want to be an example of Christ in the way that you walk and everything that you do. And that’s what Luke does, he witnesses through everything.”

Maye could have pouted about his draft stock or grown selfish this past offseason in an effort to improve it. Instead, he’s been a witness for Jesus. He’s humbly accepted his role as senior leader because it too is another gift from a gracious God. He’s gladly devoted himself to another offseason of hard work to help his team. As head coach Roy Williams, Davis and the other Tar Heel coaches will say, Maye has shown up on the first day of practice each season better than he was the year before.

A lot of questions will be answered about Maye’s future in the next few months. Will he reach his NBA dream? Will he develop into a perennial NBA All-Star? Or will he play overseas? Regardless, Maye knows he’ll be all right.

“It doesn’t matter what I do,” Maye says. “I know the Lord will always be with me.”

This story appears in the Winter 2018 issue of Sports Spectrum Magazine. For more in-depth feature stories like this, subscribe to our quarterly magazine for only $18.

WNBA No. 1 overall pick Charli Collier: ‘My God is so good’