After 19 seasons, Pat Fraher will make his NBA Finals debut. He’s just unsure of which game he’ll make his first appearance in.

Fraher is an NBA referee — No. 26 if you’re looking to spot him on TV. He had officiated more than 1,100 regular-season games and 50 playoff games in his first 18 seasons in the NBA, and he worked the 2015 NBA All-Star Game in New York. But he’s never officiated in the NBA Finals until this year, as the Miami Heat take on the Los Angeles Lakers.

The NBA on Wednesday released the list of the 12 referees who earned the right to call at least one Finals game, and Fraher is one of three first-timers.

“What I’ve been told from multiple people is you’ve got to approach it just like another game,” Fraher told the Associated Press. “We are creatures of habit and our success is built on our routines, so it’ll be the same routine that I go through for any other game. I’ll be excited and nervous — but I’m excited and nervous before every game, so hopefully there’ll be some familiar feelings for me.”

For 3 referees — Pat Fraher, Josh Tiven and Tony Brown — it was a long wait to call the #NBAFinals@bytimreynolds https://t.co/SiIhg2UCDl

Fraher will debut in either Game 2, 3 or 4. Game 2 will be Friday at 9 p.m. ET, and referee assignments are posted at approximately 9 a.m. ET each game day.

“It is important that the culture represent who does the work gets the accolades of the work, and who has good years, then becomes someone that the league can trust for that year to provide excellent work,” said Monty McCutchen, the NBA’s vice president who oversees referee development and training. “The games deserve that. Our franchises deserve that.”

It’ll be a big moment in Fraher’s career, for sure, but the moment that changed his life came three years ago. After climbing the officiating ladder by working high school and college games in his home state of Minnesota, Fraher worked in the CBA and WNBA before making it to the NBA in 2001. That was the beginning of what he thought was the “American dream.”

“[God] gave me everything I wanted, but I was still empty,” Fraher said this summer on the Sports Spectrum Podcast.

Fraher was raised in a Catholic family who “had season tickets at church, seven rows from the front.” So he went to church all the time. But he says he left grade school “knowing a lot about God, but not knowing Him personally.”

That changed three years ago. Fraher was putting on a teaching camp for aspiring referees. At the end of the event, a camper gave him a book called “Be a Man” by Larry Richards. Fraher appreciated the gesture, but didn’t read it right away. About six months later, though, he was bored on a flight and found the book in his backpack.

“It just punched me right in the face from Chapter 1,” Fraher said on the podcast.

Reading the book changed Fraher’s life, he said, and “in November of 2017, I surrendered and I gave my life to Christ.”

Well into his NBA officiating career at the time, Fraher’s perspective immediately changed.

“I went from refereeing in the NBA as who I was to what I did,” he said. “It’s a major difference. The mission changes. The mission from climbing the officiating mountain changes and you have a new mission now. You’re working for Him now, and you’ve just been given this platform.” 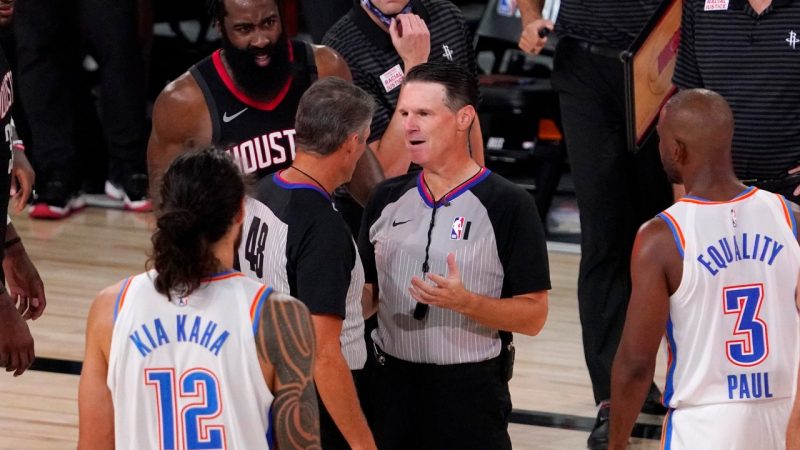 With his new eternal perspective, Fraher aims to use his platform to share the Gospel. One way he does that is by comparing faith to skydiving.

“Faith is basically forced skydiving,” he says. “We’ve been pushed out of a plane because Adam and Eve were pushed out of the Garden. Part of the problem is people don’t even know they’re falling. Now, if you can convince them that they’re falling, then you can bring them the Gospel, the Good News, right? But first they’ve got to know the bad news.

“So I began relearning my faith, and the Good News of the Gospel is that we’re offered a parachute. And I believe I had the parachute from my education, but it was just a backpack at that moment; I hadn’t opened it yet. And that’s really what I call the ‘moment of truth,’ because as believers we know that whoever believes in Him shall be saved and have eternal life. Well, that’s the key phrase — ‘believe in Him.’

As Fraher reflects on his journey, he admits he used to place his career as the top priority in his life. He’s now thankful that that career actually saved him.

“It’s amazing how God has used the very thing that I put ahead of Him to call me back to Him,” Fraher said. “Instead of taking it away from me, He actually blessed me with it.”