After trying year, Liberty men stand on God's Word as they prepare for NCAA Tournament

On the surface, it might seem like business as usual for the Liberty University men’s basketball team.

The Flames captured their third straight Atlantic Sun Conference championship with a 23-5 record and are headed back to the NCAA Tournament. Head coach Ritchie McKay was named the conference’s Coach of the Year for a second straight season and several players racked up all-conference and other prestigious honors.

But McKay will be first to say that this year has been anything but usual or easy. It’s taken a selfless approach from everyone in the program and a reliance on God to get back to the point where they were able to cut down the nets.

“They’ve had this pursuit about them where they were just going to be part of something bigger than themselves,” McKay said this week on the Sports Spectrum Podcast. “We were going to lay aside statistics and personal or individual goals — still have them, but not put them before the team and its success.” 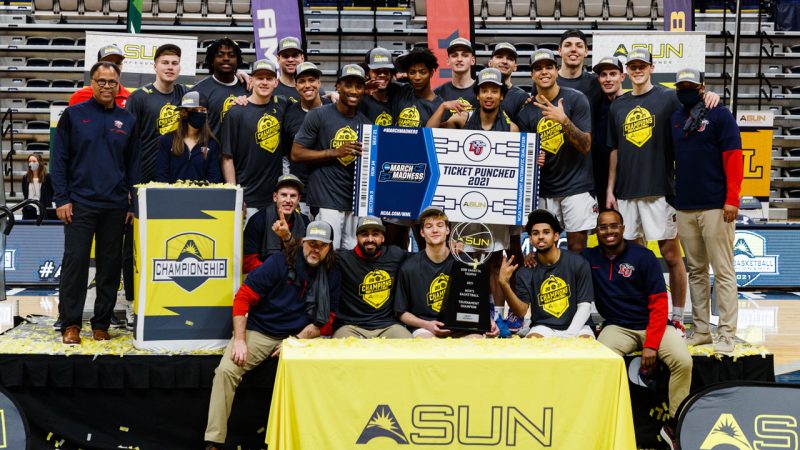 The journey for this year’s squad really began on March 12, 2020 — just four days after the Flames won the ASUN Conference tournament and punched a bid to a second straight NCAA Tournament. It was the day the season was abruptly canceled due to health and safety concerns over the coronavirus pandemic. The heartache of a lost postseason was difficult to accept.

“The anticipation of what could be ended in great disappointment,” McKay said.

In the grand scope of things, though, McKay considers that to be just a blip on the radar, because the summer brought its own set of strife. The social justice issues that arose last summer deeply affected his team, and the program felt compelled to respond.

“That really affected our group and our campus,” he said. “The neat thing about that is how they rallied, and they chose to use God’s Word in order to try and combat that.”

Even deeper pain hit the program when it returned to campus for the season, and this time it hit even closer to home. Two people in the program lost family members, and the pain of it all was felt by every member of the program.

Senior Elijah Cuffee, the ASUN Defensive Player of the Year, lost his brother suddenly. But it was then that the selfless makeup of this squad became apparent. The team took a bus to Charleston, West Virginia, to support their teammate and his family.

“I was so impressed with our guys the way they loved on Elijah, the way they sat attentively at the eulogy and celebrated his [brother’s] homegoing, yet had such compassion and sorrow for his loss,” McKay said. “They took it back home. There wasn’t one complaint from our guys.”

Later in the season, assistant coach Brad Soucie lost his wife, Kendra, after a 22-month battle with cancer.

“Brad’s been with me for 26 years and she was an important part of our family,” McKay said. “You throw all that in with the testing, the going on pause, some contracting of the virus — I’m just amazed at some of our guys’ agility in this process. To still take on all of that and have a deep sense of gratitude and an appreciation or a thankfulness to just play, man, this group is inspirational.

“They really have something different about them that I think their light shines before men.”

Personally, the past year has taken quite a toll on McKay as well. He said he’s found his identity more in who he is instead of what he does. He’s spent a lot of time in prayer and in God’s Word. He’s been able to find peace through it all.

“I think just knowing and believing God’s Word and what it says about me and the promises that if you are weary, He will give you rest,” he said. “That the good work that He has begun in you, He’ll be faithful to see it through. I think that relying on that and trusting in that gives me a peace.”

McKay came into this season thinking it could possibly be a “bridge” season and, maybe — if things went right — they could compete for a conference championship. With how last season ended, there was always a chance that the unconventional offseason and hangover from all the emotions of last March could play a role as well.

McKay’s team is tested and experienced, both on and off the court, and perhaps more ready now to make a run in the national tournament than it was when it won a first-round game in 2019.

The Flames will find out their foe when the bracket is announced on Sunday. But McKay said he senses something special about this group as it embarks on a tournament run.

“I admire the daily intentionality of trying to make someone else better in our family,” he said. “I think there’s a uniqueness to it, especially in a day and age where we’re so caught up in how a circumstance affects us. We’ve got guys that are really pursuing a selflessness that can influence others. We’re not perfect, but I don’t know that I’ve been around a group that embodies that more than this one.”