If Tytist Dean, a Cedarville University Master of Business Administration student from St. Paul, Minnesota, could choose one word to describe his life’s journey playing NCAA Division I basketball and producing Christian rap music, it would be “unorthodox.”

Though Dean has been a sports fanatic from an early age, a high school football injury, school transfers and coach transitions made a sports career look distant. “I felt like I was always having to prove myself to the new coaches,” Dean said.

“By my last high school basketball game, I had no offers,” Dean added. “The buzzer sounded, and I went over to my family and started crying because my dream was to play college ball, and that no longer seemed attainable.”

Even though his hoop dreams were in question, Dean spent countless hours during high school mixing and developing tracks in his family’s home-owned studio.

Dean’s dad, Korey Dean, has produced Christian hip-hop for more than 20 years. He owns the record label One Way Entertainment and has been nominated for gospel music’s Stellar Awards. Tytist’s mother, Mariaha Markel, creates spoken word poetry. Both of his parents are Grammy-nominated. His brother, K-Jay, began making music at age 9, and his sister, Celena Lena, produces rap. You might say musical talent runs in the family.

Though Tytist originally avoided the title of “rapper,” preferring behind-the-scenes production and audio engineering, he began wondering as a high schooler if he might be a person of influence with his music. So in the winter of 2017, Dean released his first six-track EP recording, “What Can I Say?”

“I sacrificed so much to be in the studio, to the point where my friends almost stopped asking me out,” he said, describing the effort required to produce his first EP.

“A lot of people have recognized that the Lord’s favor has gotten me to where I am. It is like He was saying, ‘I still got you. Despite how it looks now, the impossible is still possible.’” — Tytist Dean 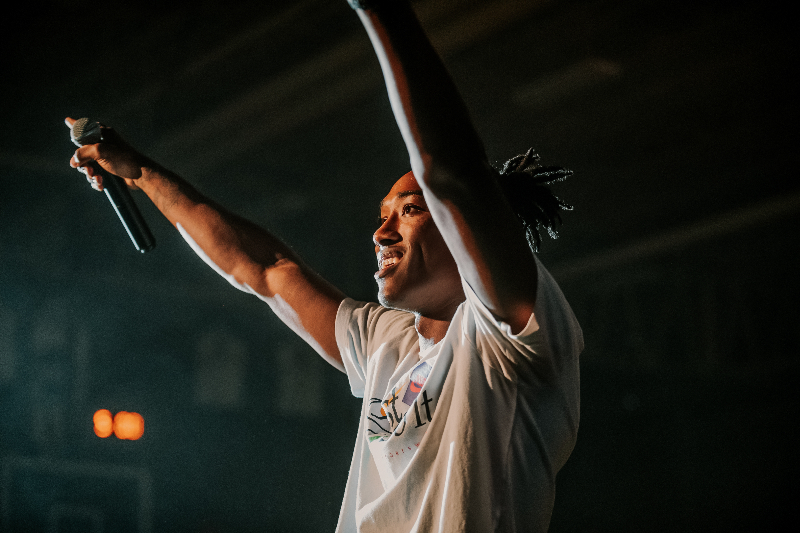 Dean was a member of the Flames for three seasons — all of which ended with berths in the NCAA Tournament (though the 2020 tournament wasn’t played due to the coronavirus pandemic). But for various reasons, Dean still had three years of eligibility after his graduation from Liberty in 2021.

That’s when Dean received a call from Cedarville (Ohio) University basketball coach Pat Estepp, who asked him to visit the Division II school and try out. A week after the visit, Estepp offered Dean a full scholarship to play for the Cedarville Yellow Jackets. Dean enrolled at Cedarville in 2021 and is currently pursuing an M.B.A. degree.

“A lot of people have recognized that the Lord’s favor has gotten me to where I am,” Dean said. “It is like He was saying, ‘I still got you. Despite how it looks now, the impossible is still possible.’”

Aiming primarily for an audience ages 18–25, Dean could not be in a better context for producing his rap music. Since his transfer to Cedarville, Dean has continued writing and producing both individually and with his sister. They both recently performed at the Cedarville basketball kickoff event, “Moonlight Madness.” The sibling duo, “Sis N Lil Bro,” will be releasing their second studio album in early 2022.

Over the past four years, Dean has performed his music at about 70 events. Some of his best memories include performing at the Twin Cities Youth Revival in Minneapolis, Minnesota, to more than 60,000 people, as well as at the 2017-2018 New Year’s Eve CRU youth seminar.

“There’s always room for growth; nobody’s perfect,” Dean said. “Surrounding yourself with people who love Christ is very helpful, people who don’t need secular influences to be their main source of happiness and influence. There’s nothing wrong or awkward about having a good time without causing trouble or constantly looking over your shoulder.”

Dean’s main passion is basketball, which he wants to pursue professionally whether playing on the court, coaching on the bench or working corporately. But no matter what, he’ll be making music. While perhaps unorthodox, Dean’s personal story is nevertheless marked with basketball and musical talent, as well as community support.

This story was originally written by Anna Grace Galkin of Cedarville University and republished with permission.