Dawn Staley, the head coach of the No. 1-ranked University of South Carolina women’s basketball team, and Richland County (S.C.) Sheriff Leon Lott, the 2021 National Sheriff of the Year, are not only good friends, but also fellow believers whose walks with God guide their leadership on the court and in the street.

“Our faith clearly guides us,” says Lott, who last year was named National Sheriff of the Year by the National Sheriff’s Association and S.C. Sheriff of the Year by the S.C. Sheriff’s Association. “It also enables us to see one another as family and it increases our responsibility to one another and to those we are charged with leading.”

Lott and Staley became friends not long after she assumed the reins of the Gamecock women’s basketball team in 2008. She is a four-time Olympic gold medalist (one of which she earned as head coach of Team USA), was a six-time WNBA All-Star and is a member of the Basketball Hall of Fame.

As the head coach at South Carolina, Staley has led the Gamecocks to five regular-season SEC championships, six conference tournament championships, seven Sweet 16 appearances, three Final Fours, and the national title in 2017. As the top-ranked 2021-22 Gamecocks prepare for the SEC Tournament starting Friday, they are 27-1.

Lott, meanwhile, was first elected to the office of sheriff of Richland County in 1996. For years, he has lectured and taught classes at the UofSC School of Law and UofSC’s Department of Criminology and Criminal Justice. He regularly speaks to the university’s athletic teams about safety, social issues, and team and community leadership. His longstanding relationships with many of USC’s head coaches and athletic directors have existed since he was first elected sheriff 26 years ago.

“For a law enforcement leader to develop relationships with a college’s or a university’s athletics programs goes a long way toward enhancing relations in the broader community,” said Lott, himself a lifelong athlete and a starting pitcher on the USC-Aiken baseball team in the early-to-mid-1970s.

So when Staley arrived 14 years ago, Lott reached out to her. They were both athletes and both keenly invested in the communities they served. As part of that mutual — though largely unconnected at the time — community involvement, Lott and Staley formed a unique partnership of understanding and interaction, wherein Lott regularly began speaking to Staley’s teams. He was already regularly attending games.

Staley — when she was not busy coaching or on the recruiting trail — began participating in various Richland County Sheriff’s Department (RCSD) functions, including ride-alongs with Lott himself, and later riding with patrol deputies across Richland County’s various regions. Soon thereafter, Staley was made an RCSD special deputy. She attended Lott’s re-swearing at a local church in 2017, and was then and there sworn in herself along with the re-swearing of all RCSD deputies. Staley’s re-swearing was held at The Meeting Place Church of Greater Columbia in 2021. 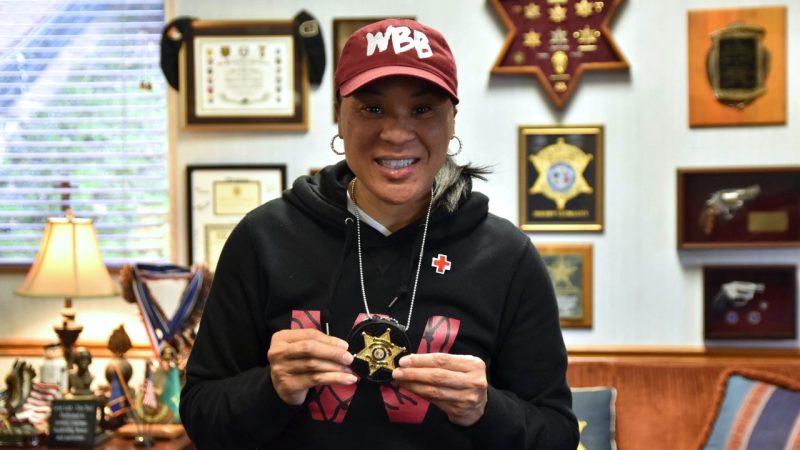 Their team-leading philosophies and approaches to leadership are also uncannily the same. Both Lott and Staley hold a belief that young people have changed in terms of how they were led in 2002 and how they may be led in 2022. But both leaders say that may actually be a good thing.

“As a coach, I can’t coach the way I coached 20 years ago; I wouldn’t have a job,” Staley said during a December 2021 webinar, Consent Decrees and Constitutional Policing, sponsored by the U.S. Department of Justice. “I really would not have a job, because I was no-nonsense. They [the younger players on her teams] can’t handle that anymore. My principles haven’t changed though. The core values of who I am as a coach, as a leader, they haven’t changed. What’s changed is the way I communicate with them and the way I want them to communicate with me — keeping those lines of communication open so that I don’t have to assume. They don’t have to assume.”

Lott agrees with Staley. “It’s like she says, you can’t talk to young people like you did 20 years ago,” Lott said during the seminar, later adding, “That’s not necessarily a bad thing. It’s simply a new dynamic requiring a different approach.”

Lott contends the communication dynamic is the same in terms of his command of some 800 sworn deputies and a total of well over 900 employees, as well as those living and working within the communities served by RCSD.

Both Staley and Lott agree that young people today are more politically astute. “They have more questions,” Lott said during a conversation last month. “They are more willing to question that which they don’t understand. And they are more involved in the lives of their communities and others … than ever before.”

Asked if partnerships like the one developed between herself and the sheriff should be embraced by all college coaches in cities across the U.S., Staley was emphatic: “I think it should be mandatory that coaches do this! Once you have a better understanding of both sides, you can be a better leader in teaching them.”

The partnership has blossomed into a special friendship.

“She knows my kids and my family,” says Lott, who is married, has four daughters, and is a member of the First Baptist Church of Columbia. “I know her players. She and I talk all the time. Even during the busyness of the basketball season, we are texting one another and always staying in touch.”

Beyond the personal friendship, both Staley and Lott are constantly seeking new ways to keep lines of communication open with young people, athletes, fans, friends and non-fans alike.

“Like Coach Staley says, we need to listen, and I listen a lot,” Lott said during the webinar. “Some of the questions they [young people, specifically Staley’s players] ask are questions that we take for granted, like, ‘Why did you shoot that person just because they had a knife?’”

That’s a great question, as are all of them, Lott said, adding: “They don’t understand the dynamics of our job, so they ask these questions and I’m able to answer them and put things in a different perspective for them. This [creates] a better understanding of what they’re feeling, what they see, and what they hear versus what we see and what we do in our job every single day.”

What are the recognizably tangible benefits? “Many,” Lott said last month. Referring back to the December 2021 webinar, he shared the story of a basketball player, who perhaps might have previously avoided him, approaching him, shaking his hand and warmly greeting him.

“They see me not just with a uniform on,” Lott said. “They see me as a supporter of them. They also see the deputies. As Coach Staley said, they see our female deputies. They see athletes that we have here at the sheriff’s department who played basketball at USC, and so they say, ‘OK, they look like me. They were like me at one time, so they must not be all bad.’”

Lott says if something happens involving deputies or police officers that might be “somewhat controversial,” Staley will reach out to him with questions for and from her student-athletes about what happened and why. “There is an open dialogue that we have developed over the years” that is beneficial to all, Lott added.