The 34-year-old outside linebacker recently signed a one-year contract extension with the Panthers through the 2018 season. The deal is worth $6.76 million and includes $3 million in guaranteed money, according to the Associated Press.

“I’m extremely excited. Everybody knows how I feel about being a Carolina Panther,” Davis said in a team release Tuesday. “This extension solidifies me being here for the rest of my career, and I’m excited about that. Now I’m totally focused on winning a Super Bowl.”

.@ThomasDavisSDTM has signed an extension and is now under contract through 2018! https://t.co/DWJ1k59hlh

Davis has faced plenty of adversity in his 13 seasons in the NFL. He tore his ACL three times during the 2009-2011 seasons.

“Knowing and understanding where I’ve come from since 2011, when I tore up my knee for the third time and thinking that my career that was going to be over – not knowing that there would be an opportunity for me to continue to play this game – to be sitting here at this moment is a blessing,” Davis said. “It’s all about giving max effort because you never know when that last play is going to be.”

Davis’ perseverance was developed many years before the three ACL tears. Rather, it was birthed during his time in college at the University of Georgia when he played for then head coach Mark Richt.

I never had a father figure in my household so I looked upon him as a father figure,” Davis recalls. “And, the way he did things, the way that he communicated things with his wife, his kids. You know, I really learned a lot about being a man from Coach Richt.” 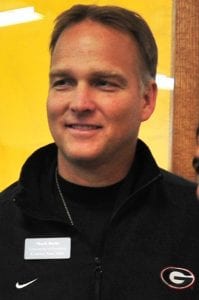 Davis also discovered Coach Richt was more than a guy about X’s and O’s. But, a man centered in faith in Jesus Christ.

He’s one of the best coaches in the country … yet he still gives all credit to God,” Davis says. “I’m like, who is this God and how can I find him? What do I have to do to get closer to Him? … I learned that from him. That’s where it all started for me.”

Davis and the Panthers continue its preseason slate against the Tennessee Titans on August 19th.

For more on Thomas Davis, watch his Increase story below.