Giving A Way Of Life 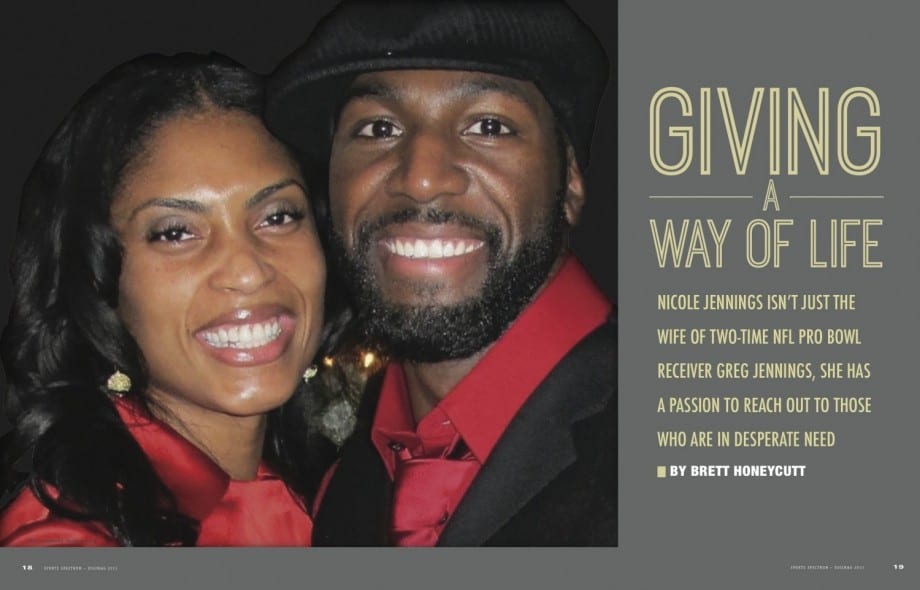 To whom much is given, much is required.

Nicole Jennings says those words with a deep passion, referencing Luke 12:48, which is also the motto for the Greg Jennings Foundation.

She lives that Scripture out on a daily basis, whether it’s running her husband’s foundation, taking care of the couple’s four children, or lending support and a voice to the Kalamazoo Gospel Mission’s “Building Hope for the Future”—a $7.8 million campaign that will build a new shelter to serve 290 homeless women and children in Kalamazoo County, Mich.

Her voice isn’t one merely of a pro athlete’s wife (her husband Greg is an eight-year NFL veteran and two-time Pro Bowl selection who has won a Super Bowl), it’s a voice of someone who has lived through the struggles of a person in need.

“I was in their shoes and I had someone come in and help me and get me out of that situation,” says Nicole. “I feel like I’ve been blessed with so much and my response is to really bless/help others. How dare I be in that situation (to help people) and have such a success story and then to come out on the proverbial top and not give back does not make much sense. That’s the thing that motivates me and keeps me going.”

Nicole Jennings was a child when she and her mother had to spend several nights at Kalamazoo Gospel Mission, a homeless shelter in the town the couple grew up.

“At the time when my mother and I had to stay there, we didn’t have any place else to go. If they weren’t there, we wouldn’t have had a place to lay our heads at night.

“Because of the history I have with the center, I thought it would be a good way to give back to the community, to the actual mission,” says Nicole, who earned her bachelor’s degree in nursing in 2006 from Western Michigan and is currently pursuing a master’s degree.

“While I don’t remember much, the fact that I was a resident (at the mission) created an important perspective on life for me. To have the Kalamazoo Gospel Mission as part of my history taught me that people care and that it is possible to make a real difference in another persons’ life. When I go into a mission or shelter that serves women and children, I feel a real connection, like I am part of them and they are part of me.”

She and her husband both grew up in the community and graduated from Kalamazoo Central High, so their love for the area runs deep.

“This project means a lot to the Kalamazoo community, I’m glad that my wife is a part of such a great endeavor,” says Greg, who is in his first year with the Minnesota Vikings after spending his first seven with the Green Bay Packers, a team he won Super Bowl XLV with in 2011 when the Packers beat the Pittsburgh Steelers, 31-25. “I’m proud of all my wife’s many projects. She’s very active in the communities we call home.”

Greg’s support for his wife and her heart for giving goes beyond words, though. When he’s playing, his focus is on his job as an NFL player and she is supporting him. When his season is finished, the focus goes on his wife and her endeavors. 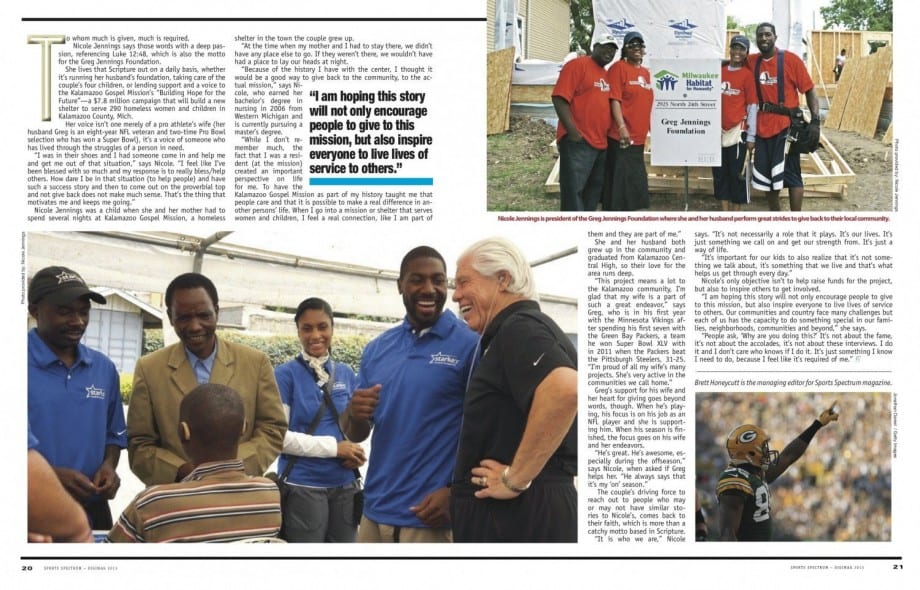 “He’s great. He’s awesome, especially during the offseason,” says Nicole, when asked if Greg helps her. “He always says that it’s my ‘on’ season.”

The couple’s driving force to reach out to people who may or may not have similar stories to Nicole’s, comes back to their faith, which is more than a catchy motto based in Scripture.

“It is who we are,” Nicole says. “It’s not necessarily a role that it plays. It’s our lives. It’s just something we call on and get our strength from. It’s just a way of life.

“It’s important for our kids to also realize that it’s not something we talk about, it’s something that we live and that’s what helps us get through every day.”

Nicole’s only objective isn’t to help raise funds for the project, but also to inspire others to get involved.

“I am hoping this story will not only encourage people to give to this mission, but also inspire everyone to live lives of service to others. Our communities and country face many challenges but each of us has the capacity to do something special in our families, neighborhoods, communities and beyond,” she says.

Brett Honeycutt is the managing editor for Sports Spectrum magazine.