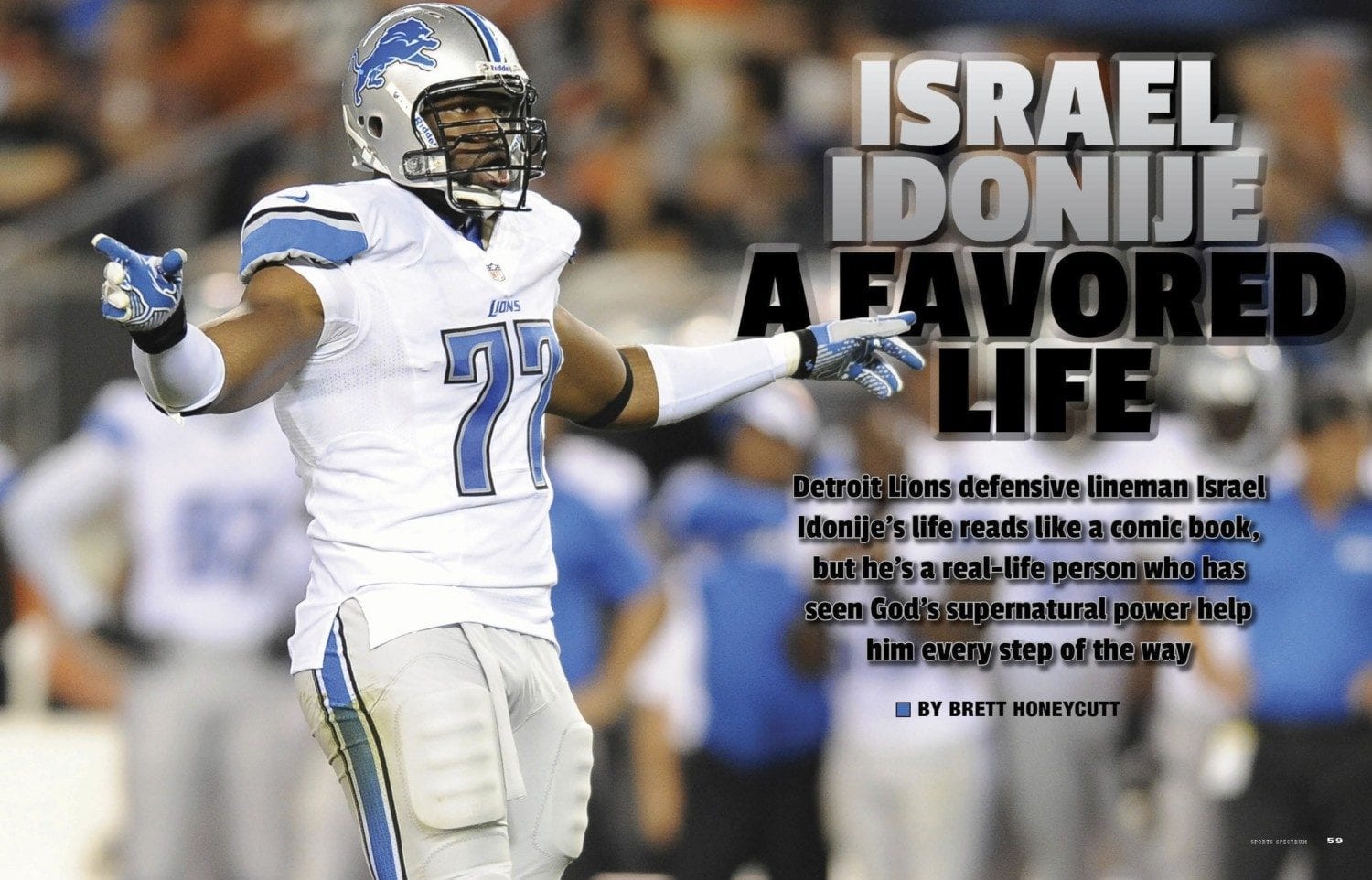 The player with the most improbable road to the NFL has a life so diverse that even a comic book would have difficulty capturing the superhero-like life of Israel Idonije.

Born in Lagos, Nigeria, to missionaries on Nov. 17, 1980, Idonije (pronounced eh-don-ish-aye) moved with his family to Brandon, Manitoba in Canada when he was four years old.

His father, Henry, served the homeless and poor in Manitoba, modeling the life Israel now leads by serving people on two continents and in three countries as he helps others in the U.S., Canada and Nigeria through the Israel Idonije Foundation.

That Israel also owns a business, Blessed Communion, which has made it easier for churches to take communion, makes the super hero narrative seem real.

Until you find out that Israel has a comic book called “The Protectors” and that he’s also a comic book character. Then you realize you really are dealing with a super hero – in real life and through the pages of a comic.

Even Israel’s name shows some type of supernatural tilt.

“‘Israel’ was the name given to Jacob after he wrestled with God,” he says. “There are a number of different meanings or variations given. ‘He would have peace with God and man’ or ‘He who wrestles with God’ or ‘Child of God’ or ‘Soldier of God.’”

“The translation that I hold most is ‘Peace with God and man’ or ‘He who has found favor with God and man.’…I’ve been very fortunate throughout my life. I’ve been blessed to have favor with my fellow humans. Without question, God has shown his favor in my life.”

And who can argue, considering everything that has happened in Israel’s life?

Road to the NFL

If Israel Idonije’s life isn’t unbelievable enough and a demonstration of God’s favor and fortune, his road to the NFL only enhances the narrative.

After moving to Canada, Israel didn’t play football until he was in the 12th grade – and even then he didn’t want to play.

“Football was never something that I aspired to do,” he admits. “I loved basketball as a child; it’s what I wanted to play.”

He was a counselor at a YMCA camp, where he ran a youth/leadership program, when his boss, Kevin Grindey, approached him about playing for his high school team.

“He said, ‘Come on and play.’ I said, ‘No, I don’t want to play football.’ He said, ‘Come out and the worst-case scenario is you would be in great shape for basketball.’ So I went out and I played.

From there, Grindey encouraged Israel to play for the provincial team, which is like the state team. Israel said he would think about it, but Grindey told him to talk to his parents.

“I never spoke with my parents,” Israel admits.

Grindey ended up calling Israel’s mother, Choice. He asked her if Israel had told her about the opportunity and that he had set Israel up with a tryout for the provincial team.

“No, he never told us anything about it.” Choice said.

“I didn’t tell her because I really didn’t want to go,” Israel recalls. “So, against my will, she drove me two and a half hours. I did not want to go to the tryout. She talked the whole way. I did not talk to her. I was not happy.”

But at the camp, Israel’s competitive side kicked in. Not wanting to be embarrassed, he “played hard, ran around, did the drills, did the exercises, and I made the team.”

It helped, because University of Manitoba head coach Brian Dobie was watching, and Israel ended up receiving a scholarship to play football there.

During Israel’s final season, a scout from the Cleveland Browns called and was interested in another player when he asked Dobie if there was anyone else he should see.

“Oh, actually, there is this kid, Israel Idonije,” Dobie said. “He is very rough, he doesn’t know the game well, but you should take a look at him.”

A concern about a SAARS outbreak kept most of the scheduled NFL scouts away the day Israel was going to practice. The only one team that showed up was the Browns.

“He pulled his car up on the field and watched me practice, and he said, ‘Hey, I think you can play in the NFL.’” Israel recalls. “And I ended up signing a free-agent deal with the Cleveland Browns. There’s been favor after favor after favor on me, and if I were to say this was my plan, or if this is what I had planned all along, it would not be the truth. 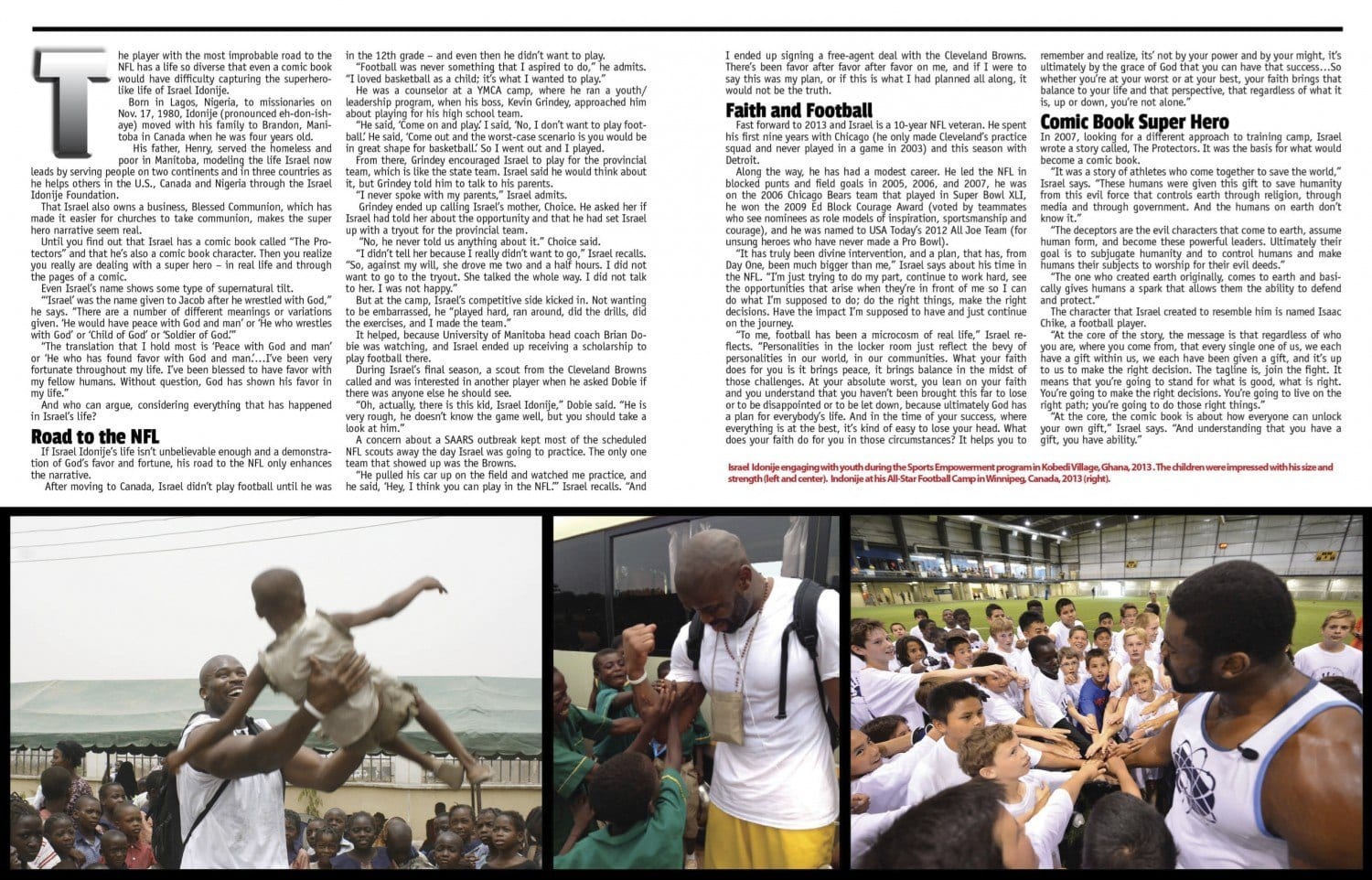 Fast forward to 2013 and Israel is a 10-year NFL veteran. He spent his first nine years with Chicago (he only made Cleveland’s practice squad and never played in a game in 2003) and this season with Detroit.

Along the way, he has had a modest career. He led the NFL in blocked punts and field goals in 2005, 2006, and 2007, he was on the 2006 Chicago Bears team that played in Super Bowl XLI, he won the 2009 Ed Block Courage Award (voted by teammates who see nominees as role models of inspiration, sportsmanship and courage), and he was named to USA Today’s 2012 All Joe Team (for unsung heroes who have never made a Pro Bowl).

“It has truly been divine intervention, and a plan, that has, from Day One, been much bigger than me,” Israel says about his time in the NFL. “I’m just trying to do my part, continue to work hard, see the opportunities that arise when they’re in front of me so I can do what I’m supposed to do; do the right things, make the right decisions. Have the impact I’m supposed to have and just continue on the journey.

“To me, football has been a microcosm of real life,” Israel reflects. “Personalities in the locker room just reflect the bevy of personalities in our world, in our communities. What your faith does for you is it brings peace, it brings balance in the midst of those challenges. At your absolute worst, you lean on your faith and you understand that you haven’t been brought this far to lose or to be disappointed or to be let down, because ultimately God has a plan for everybody’s life. And in the time of your success, where everything is at the best, it’s kind of easy to lose your head. What does your faith do for you in those circumstances? It helps you to remember and realize, its’ not by your power and by your might, it’s ultimately by the grace of God that you can have that success…So whether you’re at your worst or at your best, your faith brings that balance to your life and that perspective, that regardless of what it is, up or down, you’re not alone.”

In 2007, looking for a different approach to training camp, Israel wrote a story called, The Protectors. It was the basis for what would become a comic book.

“It was a story of athletes who come together to save the world,” Israel says. “These humans were given this gift to save humanity from this evil force that controls earth through religion, through media and through government. And the humans on earth don’t know it.”

“The deceptors are the evil characters that come to earth, assume human form, and become these powerful leaders. Ultimately their goal is to subjugate humanity and to control humans and make humans their subjects to worship for their evil deeds.”

“The one who created earth originally, comes to earth and basically gives humans a spark that allows them the ability to defend and protect.”

The character that Israel created to resemble him is named Isaac Chike, a football player.

“At the core, the comic book is about how everyone can unlock your own gift,” Israel says. “And understanding that you have a gift, you have ability.” 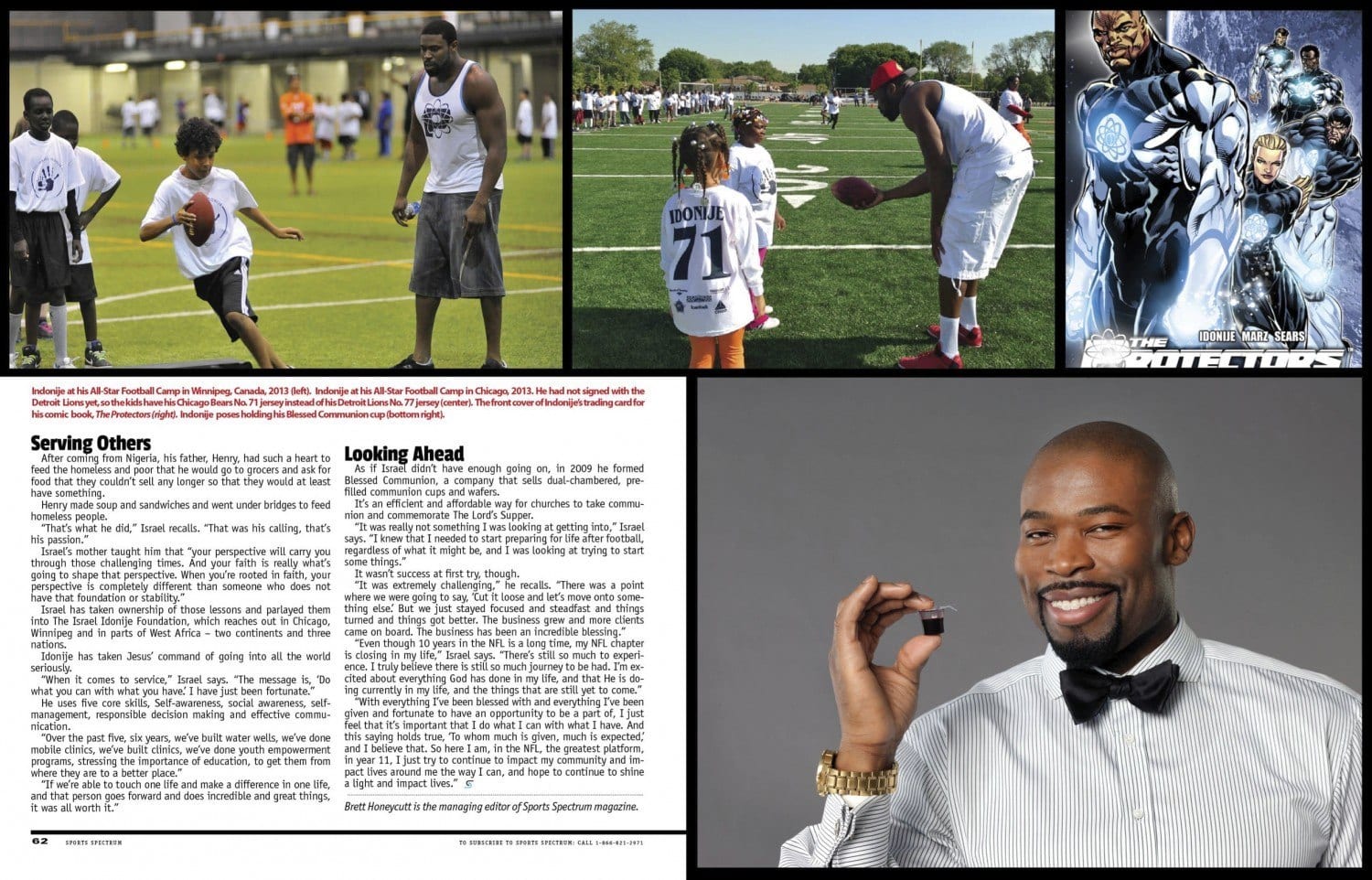 After coming from Nigeria, his father, Henry, had such a heart to feed the homeless and poor that he would go to grocers and ask for food that they couldn’t sell any longer so that they would at least have something.

Henry made soup and sandwiches and went under bridges to feed homeless people.

“That’s what he did,” Israel recalls. “That was his calling, that’s his passion.”

Israel’s mother taught him that “your perspective will carry you through those challenging times. And your faith is really what’s going to shape that perspective. When you’re rooted in faith, your perspective is completely different than someone who does not have that foundation or stability.”

Israel has taken ownership of those lessons and parlayed them into The Israel Idonije Foundation, which reaches out in Chicago, Winnipeg and in parts of West Africa – two continents and three nations.

Idonije has taken Jesus’ command of going into all the world seriously.

“When it comes to service,” Israel says. “The message is, ‘Do what you can with what you have.’ I have just been fortunate.”

“If we’re able to touch one life and make a difference in one life, and that person goes forward and does incredible and great things, it was all worth it.”

As if Israel didn’t have enough going on, in 2009 he formed Blessed Communion, a company that sells dual-chambered, pre-filled communion cups and wafers.

It’s an efficient and affordable way for churches to take communion and commemorate The Lord’s Supper.

“It was really not something I was looking at getting into,” Israel says. “I knew that I needed to start preparing for life after football, regardless of what it might be, and I was looking at trying to start some things.”

It wasn’t success at first try, though.

“It was extremely challenging,” he recalls. “There was a point where we were going to say, ‘Cut it loose and let’s move onto something else.’ But we just stayed focused and steadfast and things turned and things got better. The business grew and more clients came on board. The business has been an incredible blessing.”

“With everything I’ve been blessed with and everything I’ve been given and fortunate to have an opportunity to be a part of, I just feel that it’s important that I do what I can with what I have. And this saying holds true, ‘To whom much is given, much is expected,’ and I believe that. So here I am, in the NFL, the greatest platform, in year 11, I just try to continue to impact my community and impact lives around me the way I can, and hope to continue to shine a light and impact lives.”