Ever since Henry Ford’s first Model T hit the streets in 1908, automobiles have fascinated the American public. We’ve been transfixed by Beetles, GTOs, Corvettes, Ferraris and Hummers. We still talk about the cars (sometimes more than the actors) from our favorite movies and TV shows: Marty McFly’s DeLorean, Bo and Luke Duke’s “General Lee” (a Dodge Charger) and Steve McQueen’s 1968 Ford Mustang GT fastback from Bullitt, to name a few.

Don’t laugh. Sure, at first glance, the clunky-looking economy sedan produces zero awe. But one particular ’91 626 has achieved enough publicity to make any Ford Escort or Toyota Corolla turn metallic green with envy.

Last fall, as Washington Redskins running back Alfred Morris was cruising to a record-shattering rookie season, the news media learned that he drove a car better suited for a cash-poor college freshman than a budding NFL star. The story went viral. Morris’ Mazda, nicknamed “Bentley,” was featured by The Washington Post, USA Today, Yahoo! Sports and CBSSports.com, among others. The D.C. area’s NBC TV affiliate aired a nearly three-minute segment on Morris and his ride. And Sports Illustrated, inspired by the story, published a 33-item online photo gallery of athletes and their cars.

Like Bentley, Morris became an unexpected celebrity last season. The sixth-round draft pick out of nondescript Florida Atlantic University took the NFL by storm, finishing as the league’s second-leading rusher behind Minnesota superstar Adrian Peterson. Powered by Morris and sensational rookie quarterback Robert Griffin III, the 2012 Redskins won their first NFC East Division title since 1999 and suddenly appear to be a contender for the foreseeable future.

Nobody saw this coming. Perhaps they should have. Scripture, after all, teaches that God exalts the humble. And you won’t find a more likable, humble NFL star than Alfred Morris. 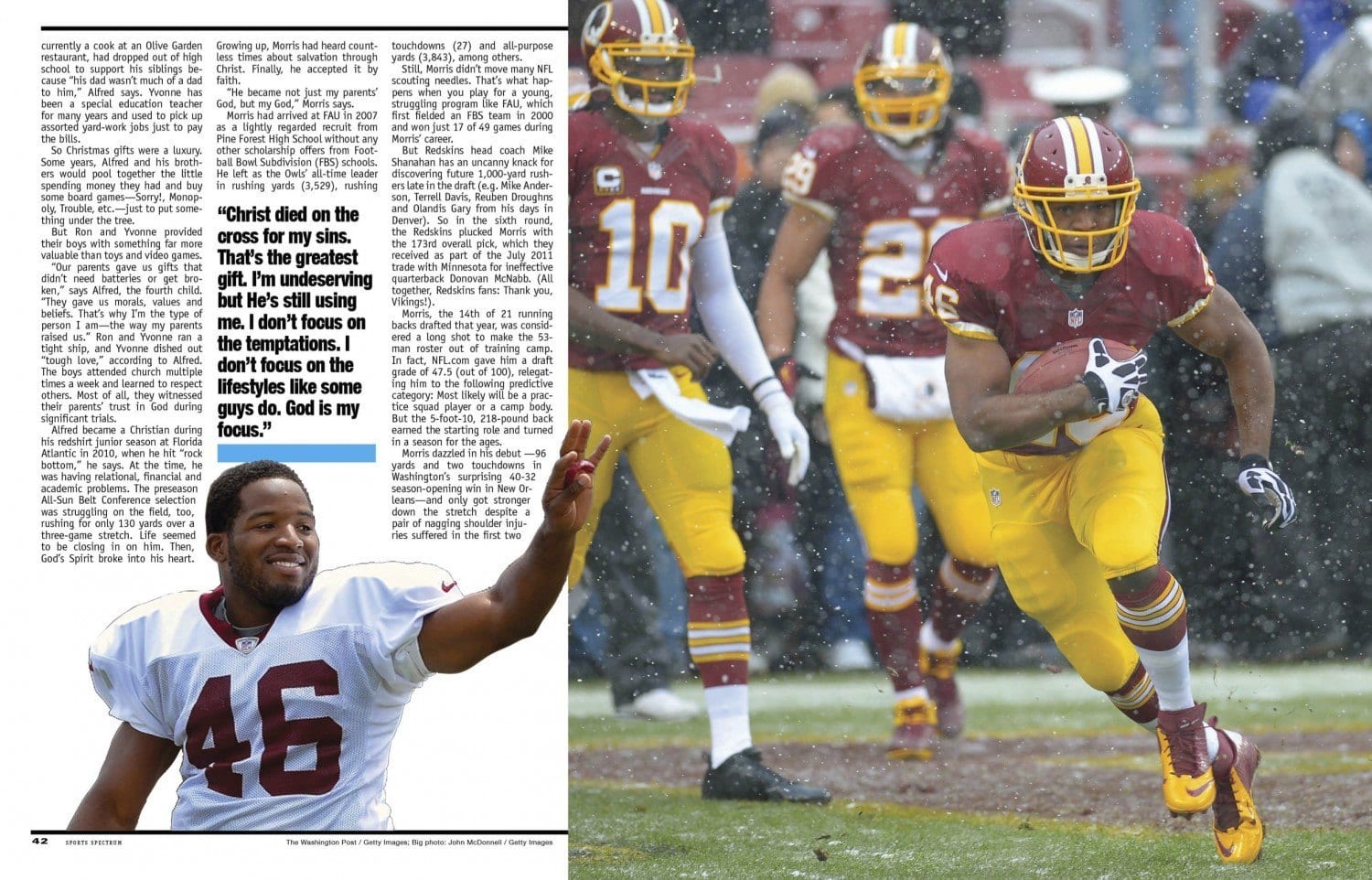 The floor underneath the Christmas tree was barren.

For the tight-knit Morris clan, the holidays were a time of joy and celebration. But they also served as a candid reminder of the family’s economic plight.

Morris’ parents, Ron and Yvonne, worked hard just to scrape together a living as they raised seven sons in Pensacola, Fla. Ron, currently a cook at an Olive Garden restaurant, had dropped out of high school to support his siblings because “his dad wasn’t much of a dad to him,” Alfred says. Yvonne has been a special education teacher for many years and used to pick up assorted yard-work jobs just to pay the bills.

So Christmas gifts were a luxury. Some years, Alfred and his brothers would pool together the little spending money they had and buy some board games—Sorry!, Monopoly, Trouble, etc.—just to put something under the tree.

But Ron and Yvonne provided their boys with something far more valuable than toys and video games.

“Our parents gave us gifts that didn’t need batteries or get broken,” says Alfred, the fourth child. “They gave us morals, values and beliefs. That’s why I’m the type of person I am—the way my parents raised us.” Ron and Yvonne ran a tight ship, and Yvonne dished out “tough love,” according to Alfred. The boys attended church multiple times a week and learned to respect others. Most of all, they witnessed their parents’ trust in God during significant trials.

Alfred became a Christian during his redshirt junior season at Florida Atlantic in 2010, when he hit “rock bottom,” he says. At the time, he was having relational, financial and academic problems. The preseason All-Sun Belt Conference selection was struggling on the field, too, rushing for only 130 yards over a three-game stretch. Life seemed to be closing in on him. Then, God’s Spirit broke into his heart. Growing up, Morris had heard countless times about salvation through Christ. Finally, he accepted it by faith.

“He became not just my parents’ God, but my God,” Morris says.

Morris had arrived at FAU in 2007 as a lightly regarded recruit from Pine Forest High School without any other scholarship offers from Football Bowl Subdivision (FBS) schools. He left as the Owls’ all-time leader in rushing yards (3,529), rushing touchdowns (27) and all-purpose yards (3,843), among others.

Still, Morris didn’t move many NFL scouting needles. That’s what happens when you play for a young, struggling program like FAU, which first fielded an FBS team in 2000 and won just 17 of 49 games during Morris’ career.

But Redskins head coach Mike Shanahan has an uncanny knack for discovering future 1,000-yard rushers late in the draft (e.g. Mike Anderson, Terrell Davis, Reuben Droughns and Olandis Gary from his days in Denver). So in the sixth round, the Redskins plucked Morris with the 173rd overall pick, which they received as part of the July 2011 trade with Minnesota for ineffective quarterback Donovan McNabb. (All together, Redskins fans: Thank you, Vikings!).

Morris, the 14th of 21 running backs drafted that year, was considered a long shot to make the 53-man roster out of training camp. In fact, NFL.com gave him a draft grade of 47.5 (out of 100), relegating him to the following predictive category: Most likely will be a practice squad player or a camp body. But the 5-foot-10, 218-pound back earned the starting role and turned in a season for the ages.

Morris dazzled in his debut —96 yards and two touchdowns in Washington’s surprising 40-32 season-opening win in New Orleans—and only got stronger down the stretch despite a pair of nagging shoulder injuries suffered in the first two games. He helped the Redskins, who started 3-6, win their last seven games and reach the playoffs for the first time since 2007 by averaging 117 yards per game and scoring eight touchdowns during that span.

In the regular-season finale, he carved up Dallas, the Redskins’ bitter rival, for 200 yards and three touchdowns in a 28-18 win, marking the franchise’s first 200-yard rushing performance since 1989. Morris finished the season with a team-record 1,613 yards, the third-highest rookie total in NFL history, and 13 touchdowns, earning a Pro Bowl trip as an alternate.

Thanks in large part to Morris and Griffin, the NFL’s 2012 offensive rookie of the year, the Redskins boasted the league’s top-ranked rushing attack (169.3 yards per game) and the fifth-most prolific offense (383.2 ypg) last year. Washington lost to Seattle in the first round of the NFC playoffs—a game most notable for Griffin’s gruesome knee injury that required reconstructive surgery on two ligaments. But this much was clear: The franchise had a new star running back. So much for low expectations.

“God had bigger plans,” Morris says. “He opened the door for me, and I showed what I was able to do.”

Morris doesn’t possess breakaway speed. His 40-yard dash at the NFL scouting combine was a pedestrian 4.67 seconds, and his longest run last season was just 39 yards. But he’s as consistent as a Swiss watch. Head down, shoulders lowered and legs pumping like V-8 pistons, he hits holes quickly and powerfully. He’s shifty but is also able to pick up yards after contact. In other words, he’s a coach’s dream.

Now, a player who was fairly anonymous around Redskins Park during 2012 training camp is the toast of the nation’s capital. Fans chant his name. Kids and grownups alike jostle behind security ropes for his autograph. It’s all quite surreal for the modest 24-year-old.

In a league of millionaire narcissists who prance and preen after every big play, Morris presents a striking contrast. Sudden fame hasn’t changed the modest kid from Florida’s panhandle. He is a humble man who continually deflects credit to God and doesn’t allow his confidence in his abilities to cross into arrogance. He is a polite “Yes sir, no sir” gentleman with a high-wattage smile and an infectious laugh.

Perhaps his car best describes him. There’s a lot of “Bentley” in Morris. He is unflashy, dependable and—until last year —overlooked. Like his ride, what you see is what you get. Amidst the NFL’s bling-heavy culture, Morris has remained completely satisfied with a 22-year-old vehicle sporting 126,000 miles and an Edmunds.com estimated resale value of less than $900. The pervasive glitz and glamour of his profession? He’s not interested. 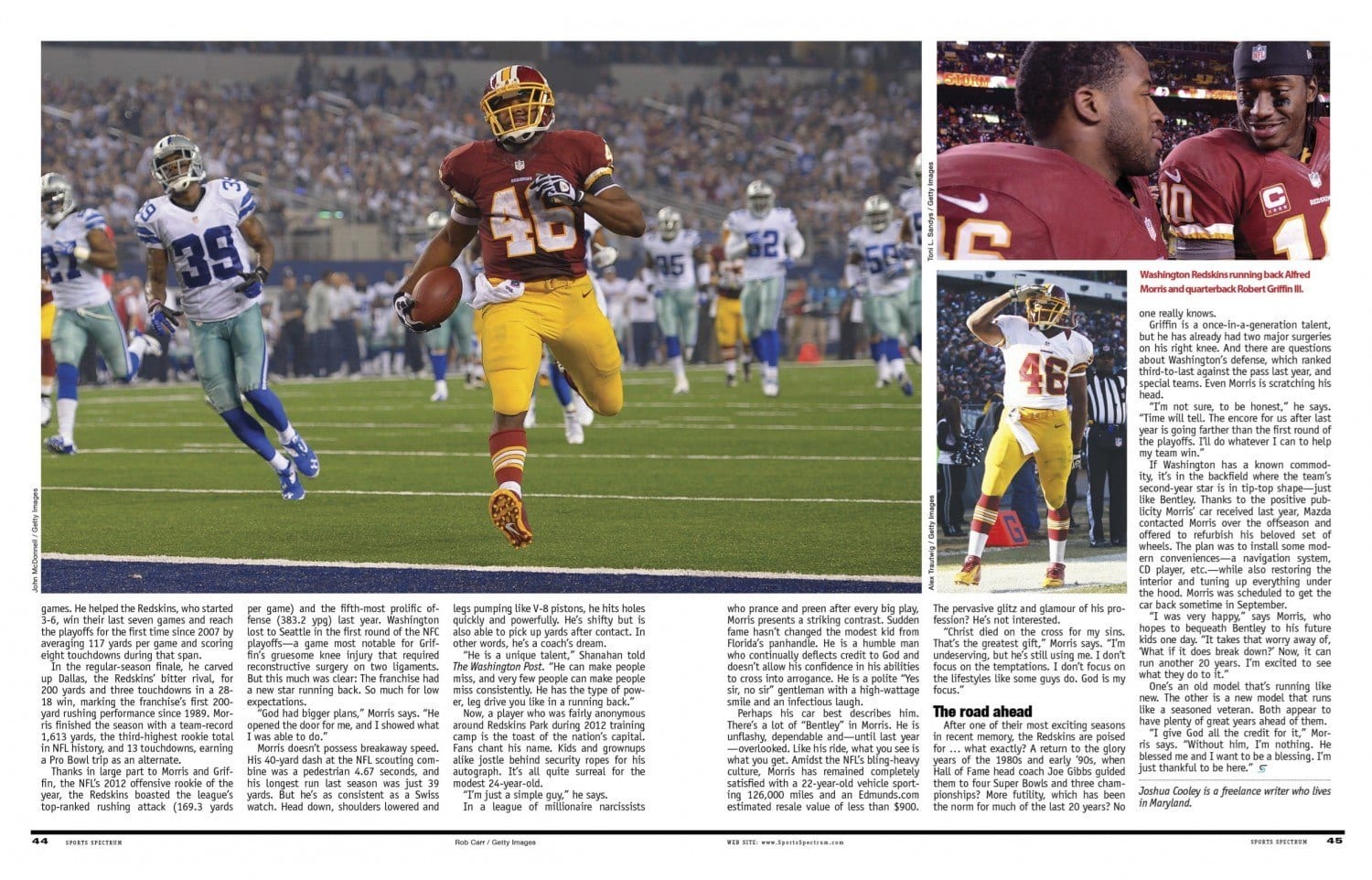 After one of their most exciting seasons in recent memory, the Redskins are poised for … what exactly? A return to the glory years of the 1980s and early ’90s, when Hall of Fame head coach Joe Gibbs guided them to four Super Bowls and three championships? More futility, which has been the norm for much of the last 20 years? No one really knows.

Griffin is a once-in-a-generation talent, but he has already had two major surgeries on his right knee. And there are questions about Washington’s defense, which ranked third-to-last against the pass last year, and special teams. Even Morris is scratching his head.

“I’m not sure, to be honest,” he says. “Time will tell. The encore for us after last year is going farther than the first round of the playoffs. I’ll do whatever I can to help my team win.”

If Washington has a known commodity, it’s in the backfield where the team’s second-year star is in tip-top shape—just like Bentley. Thanks to the positive publicity Morris’ car received last year, Mazda contacted Morris over the offseason and offered to refurbish his beloved set of wheels. The plan was to install some modern conveniences—a navigation system, CD player, etc.—while also restoring the interior and tuning up everything under the hood. Morris was scheduled to get the car back sometime in September.

“I was very happy,” says Morris, who hopes to bequeath Bentley to his future kids one day. “It takes that worry away of, ‘What if it does break down?’ Now, it can run another 20 years. I’m excited to see what they do to it.”

One’s an old model that’s running like new. The other is a new model that runs like a seasoned veteran. Both appear to have plenty of great years ahead of them.

“I give God all the credit for it,” Morris says. “Without him, I’m nothing. He blessed me and I want to be a blessing. I’m just thankful to be here.”

Joshua Cooley is a freelance writer who lives in Maryland.