Chargers’ wide receiver Vincent Brown is anything but your typical NFL player. Off the field, the down-to-earth Upland, California, native is at home in jeans and Converse playing the drums with the energy of a teenager! On the field, the fourth year player is one of quarterback Philip Rivers’ top targets.

During the 2013 season, Brown played a pivotal role in helping San Diego reach the playoffs, pulling down 41 receptions for 472 yards. The Bolts didn’t advance past the third game of the playoffs, but for Brown, the entire experience was thrilling. The season served as a huge comeback year after limited playing time his rookie year in 2011 because of a hamstring injury—and then suffering a broken ankle during the 2012 preseason.

“God really got my attention [with the ankle],” shares the 25-year-old. “Taking away football shifted my thinking to put me on the right track—that football is important, but there is nothing more important than God. It was a hard experience to go through, but the growth I had through that process was amazing.”

“The first three weeks, I was stuck on my couch and couldn’t move,” Brown says. “I physically couldn’t do anything in my own power. Every time I went to make a decision, I realized that all my strength and power came from God. That’s exactly where he wanted me to be; God first, and everything else falls into place, just like Scripture says.”

Studying the Word, going to Bible study, and finding teammates to stay accountable with has made all the difference in Brown’s walk with Christ while living in the limelight. He attends the Rock Church in San Diego, is involved in a few Bible studies, and regularly meets with teammate Darrell Stuckey and FCA’s Colin Sinclair.

“Meeting with others helps me keep on track, and keep accountable with each other,” he says. “I try to just focus on using the gifts God gave me to show God’s love. That’s what I’m all about. I’m just a normal guy.” Brown’s goals entering this season are to play his role on the offense, to take advantage of every opportunity that comes his way, and to praise God through it all. “I want to praise God in football and to let people know who God is, and not be afraid to take the step out to play for him,” he sums. “I want to worship God, and that’s how football is for me.”

A lot of guys point up to the sky when they score a touchdown, and whether or not it’s sincere, for Brown it is, and he makes sure to kneel in a prayer of thanks. “I was never the biggest or strongest athlete,” says the San Diego State University graduate. “I had to work really hard to get where I’m at. I would stay after practice and take extra reps to get better.” 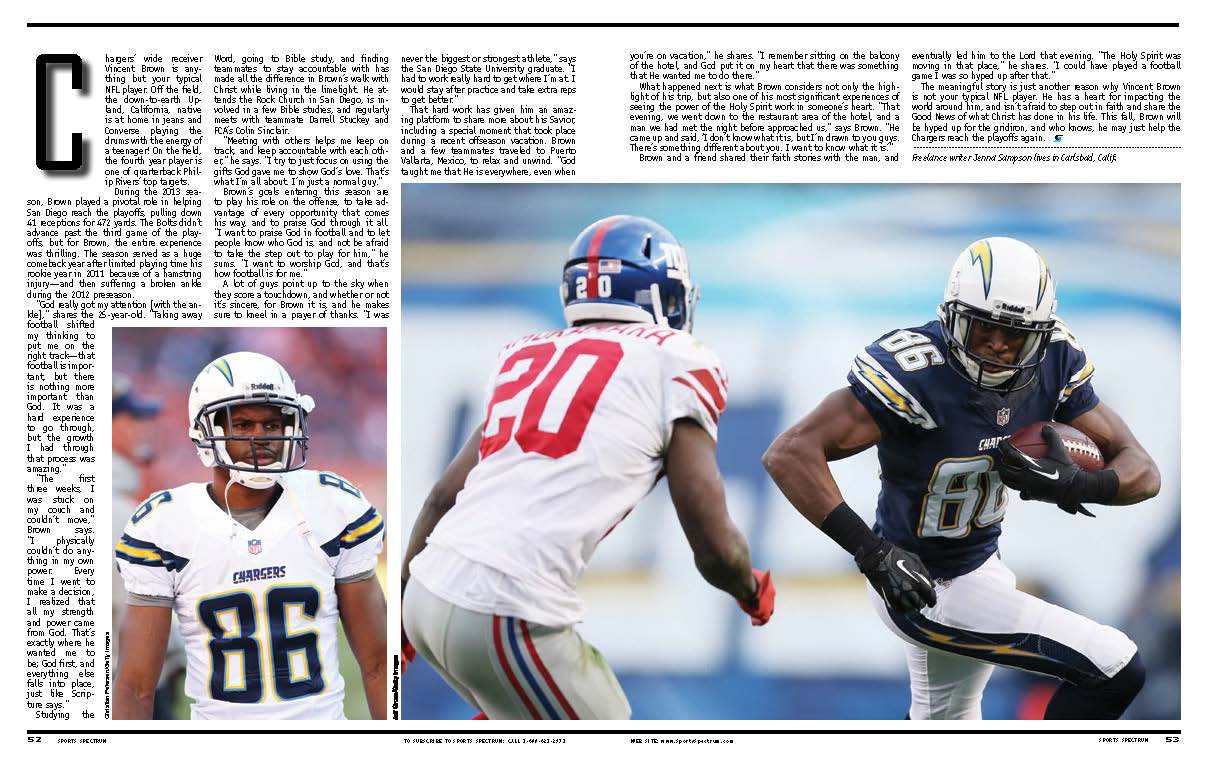 That hard work has given him an amazing platform to share more about his Savior, including a special moment that took place during a recent offseason vacation. Brown and a few teammates traveled to Puerto Vallarta, Mexico, to relax and unwind. “God taught me that He is everywhere, even when you’re on vacation,” he shares. “I remember sitting on the balcony of the hotel, and God put it on my heart that there was something that He wanted me to do there.”

What happened next is what Brown considers not only the highlight of his trip, but also one of his most significant experiences of seeing the power of the Holy Spirit work in someone’s heart. “That evening, we went down to the restaurant area of the hotel, and a man we had met the night before approached us,” says Brown. “He came up and said, ‘I don’t know what it is, but I’m drawn to you guys. There’s something different about you. I want to know what it is.’”

Brown and a friend shared their faith stories with the man, and eventually led him to the Lord that evening. “The Holy Spirit was moving in that place,” he shares. “I could have played a football
game I was so hyped up after that.”

The meaningful story is just another reason why Vincent Brown is not your typical NFL player. He has a heart for impacting the world around him, and isn’t afraid to step out in faith and share the Good News of what Christ has done in his life. This fall, Brown will be hyped up for the gridiron, and who knows, he may just help the Chargers reach the playoffs again.