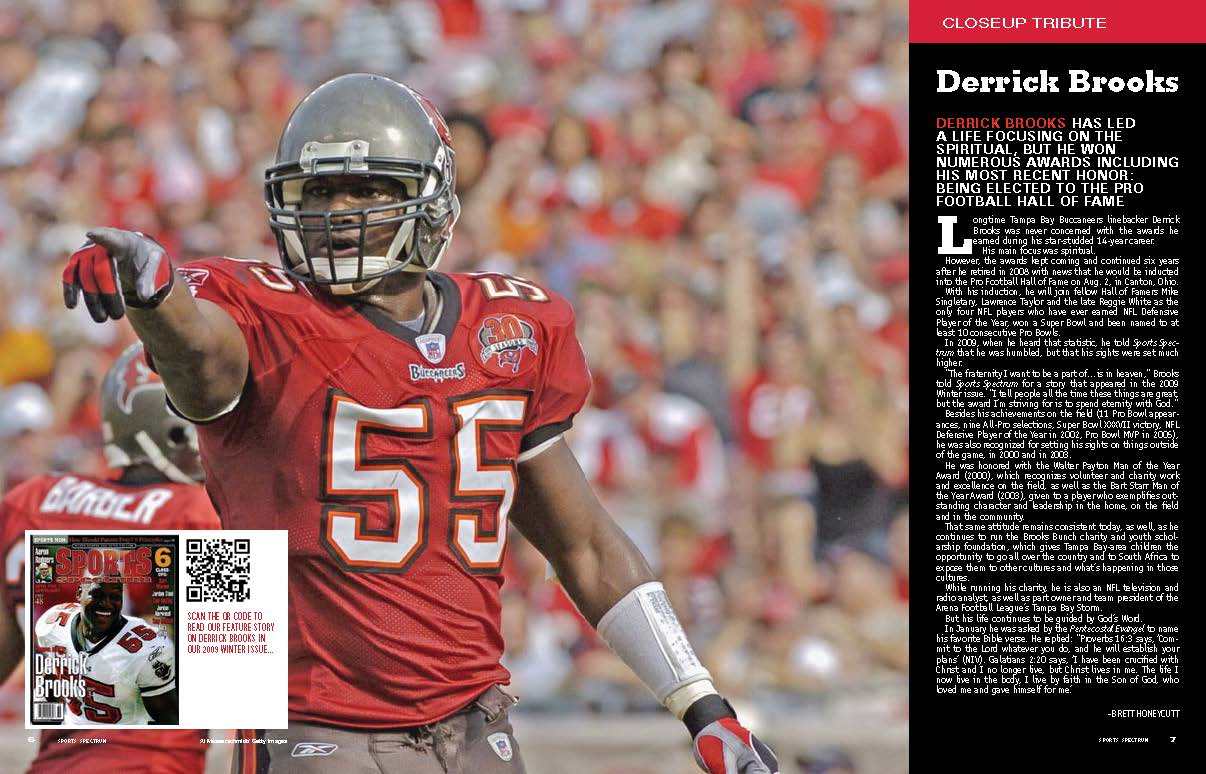 Longtime Tampa Bay Buccaneers linebacker Derrick
Brooks was never concerned with the awards he
earned during his star-studded 14-year career.
His main focus was spiritual.

However, the awards kept coming and continued six years
after he retired in 2008 with news that he would be inducted
into the Pro Football Hall of Fame on Aug. 2, in Canton, Ohio.

With his induction, he will join fellow Hall of Famers Mike
Singletary, Lawrence Taylor and the late Reggie White as the
only four NFL players who have ever earned NFL Defensive
Player of the Year, won a Super Bowl and been named to at
least 10 consecutive Pro Bowls.

In 2009, when he heard that statistic, he told Sports Spectrum
that he was humbled, but that his sights were set much
higher.

“The fraternity I want to be a part of…is in heaven,” Brooks
told Sports Spectrum for a story that appeared in the 2009
Winter issue. “I tell people all the time these things are great,
but the award I’m striving for is to spend eternity with God.”

Besides his achievements on the field (11 Pro Bowl appearances,
nine All-Pro selections, Super Bowl XXXVII victory, NFL
Defensive Player of the Year in 2002, Pro Bowl MVP in 2005),
he was also recognized for setting his sights on things outside
of the game, in 2000 and in 2003.

He was honored with the Walter Payton Man of the Year
Award (2000), which recognizes volunteer and charity work
and excellence on the field, as well as the Bart Starr Man of
the Year Award (2003), given to a player who exemplifies outstanding
character and leadership in the home, on the field
and in the community.

That same attitude remains consistent today, as well, as he
continues to run the Brooks Bunch charity and youth scholarship
foundation, which gives Tampa Bay-area children the
opportunity to go all over the country and to South Africa to
expose them to other cultures and what’s happening in those
cultures.

While running his charity, he is also an NFL television and
radio analyst, as well as part owner and team president of the
Arena Football League’s Tampa Bay Storm.

But his life continues to be guided by God’s Word.

In January he was asked by the Pentecostal Evangel to name
his favorite Bible verse. He replied: “Proverbs 16:3 says, ‘Commit
to the Lord whatever you do, and he will establish your
plans’ (NIV). Galatians 2:20 says, ‘I have been crucified with
Christ and I no longer live, but Christ lives in me. The life I
now live in the body, I live by faith in the Son of God, who
loved me and gave himself for me’.