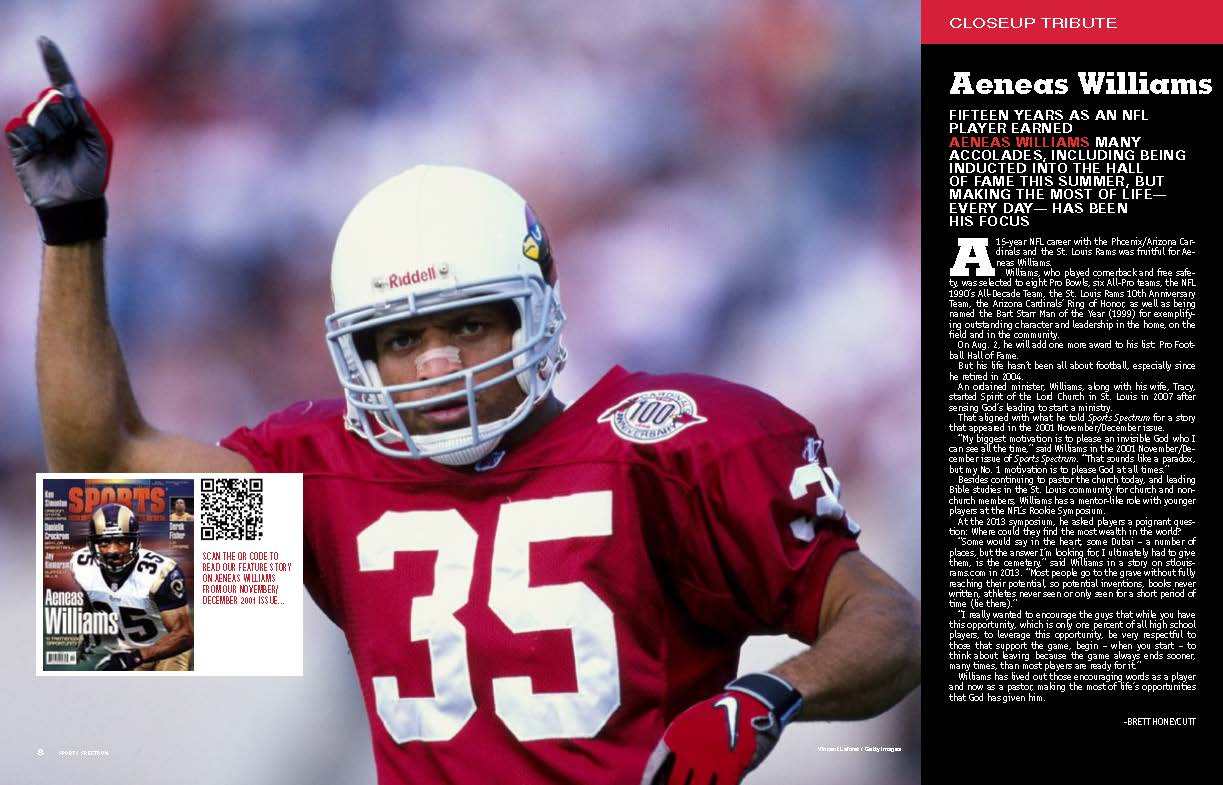 15-year NFL career with the Phoenix/Arizona Cardinals
and the St. Louis Rams was fruitful for Aeneas
Williams.

Williams, who played cornerback and free safety,
was selected to eight Pro Bowls, six All-Pro teams, the NFL
1990’s All-Decade Team, the St. Louis Rams 10th Anniversary
Team, the Arizona Cardinals’ Ring of Honor, as well as being
named the Bart Starr Man of the Year (1999) for exemplifying
outstanding character and leadership in the home, on the
field and in the community.

On Aug. 2, he will add one more award to his list: Pro Football
Hall of Fame.

But his life hasn’t been all about football, especially since
he retired in 2004.

An ordained minister, Williams, along with his wife, Tracy,
started Spirit of the Lord Church in St. Louis in 2007 after
sensing God’s leading to start a ministry.

That aligned with what he told Sports Spectrum for a story
that appeared in the 2001 November/December issue.

Besides continuing to pastor the church today, and leading
Bible studies in the St. Louis community for church and nonchurch
members, Williams has a mentor-like role with younger
players at the NFL’s Rookie Symposium.

At the 2013 symposium, he asked players a poignant question:
Where could they find the most wealth in the world?

“Some would say in the heart, some Dubai – a number of
places, but the answer I’m looking for, I ultimately had to give
them, is the cemetery,” said Williams in a story on stlouisrams.
com in 2013. “Most people go to the grave without fully
reaching their potential, so potential inventions, books never
written, athletes never seen or only seen for a short period of
time (lie there).”

“I really wanted to encourage the guys that while you have
this opportunity, which is only one percent of all high school
players, to leverage this opportunity, be very respectful to
those that support the game, begin – when you start – to
think about leaving because the game always ends sooner,
many times, than most players are ready for it.”

Williams has lived out those encouraging words as a player
and now as a pastor, making the most of life’s opportunities
that God has given him.