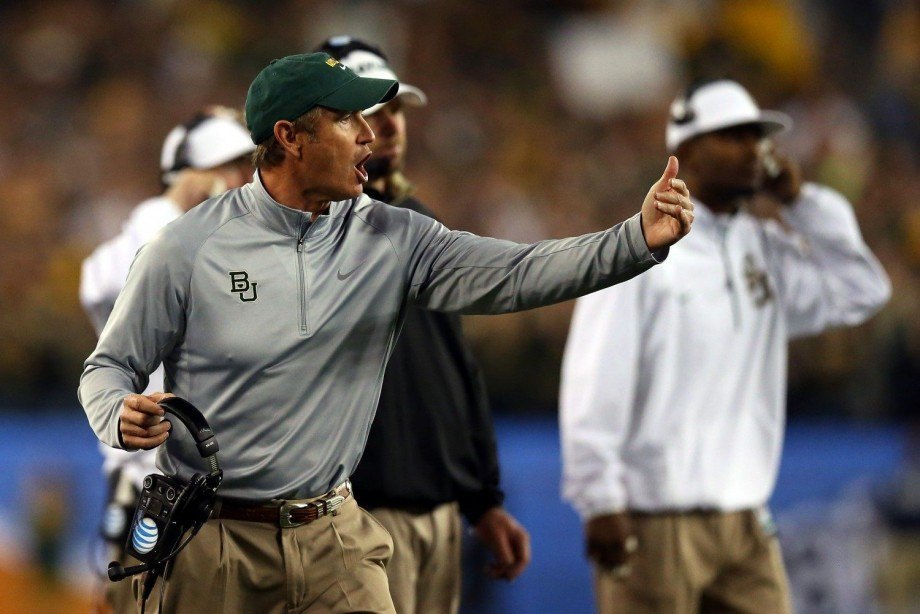 With his record-setting, high-octane offense, his waves of points, yards and victories, Baylor head football coach Art Briles has taken his once-woeful, now wow-inspiring team to heights even the most optimistic Bears fans never thought possible.

He changed the attitude from consistent loser to Big 12 Conference champions complete with a sparkling, new multi-million dollar stadium, tens of millions of dollars of revenue for the school and the rightful expectations that Baylor can continue as a faith-based, private school powerhouse for years to come.

The only thing the slow-talking, quick-thinking, 58-year-old Texas native hopes never changes at Baylor is him

For while the Baylor football team does its most public and most spectacular work before stadiums full of cheering (or jeering fans if on the road), Briles says his most important work for the week takes place on Thursday morning at the school’s new athletic headquarters.

“It’s always good when you can worship at work, that’s our church for the week,” Briles says.

While Baylor’s innovative, fast-paced playlist is a closely guarded secret, Yeary is more than happy to expose the real source of the coaches’ power over the last several years.

“Two years ago we studied the beatitudes (at coaches Bible study). Last year we studied the names of God. We went over Romans 8. I always want to find 2-3 things that God is speaking to us about.

While Briles has a large metal frame on his office bookshelf which reads “Faith” and closes his latest book, Beating Goliath, by saying, “I praise God for all blessings in my life,” he had to find out the real meaning of faith in his life on one horrible fall day. On October 16, 1976, his parents and his aunt were killed in a car accident en route to see him play for the University of Houston at the Cotton Bowl in Dallas.

It’s a traumatic incident which has driven some away from God in anger and others closer to Him for help and comfort.

“I think both happened to me,” says Briles, recalling his life-defining moment. “At first I wondered why God would allow that and I was embittered why this would happen, but after I settled down a bit and the emotion faded, I saw it’s not my plan, but it’s God plan for me for this to happen.”

After a citywide funeral in his West Texas hometown of Rule, which was larger than any church in town and had to be held in the school gym, Briles returned to Houston, but never played again for the Cougars. He then transferred to Texas Tech, where he didn’t played football and didn’t go to a college game.

With the strength of his future wife Jan, who was originally going to be in the car with his parents, he dedicated his life to what his father did for decades, coaching football.

Briles was hugely successful in the high school ranks, winning four state championships in Stephenville, outside of Fort Worth, before launching his college career, which led him to Baylor in 2007—a time when the school and the football program were at their lowest ebb.

But his faith and his life have prepared him to leave the world’s largest Baptist university to lofty athletic heights against the state-funded giants of the college football world.

“To me, my faith is a shelter in the storm. That’s what a quiet time brings. You are who you are all the time, you live an example and hope you see the student-athlete develop. To make their goals to leave here as good husbands, good citizens and with a good legacy,” says Briles in a quiet moment before another fast-paced practice.

“My life verse is, ‘I can do all things through Christ which strengths me,’ Philippians 4:13, because that is what has happened in my life.”

While Briles toiled in college jobs at Texas Tech and the University of Houston in relative obscurity, he’s led Baylor into a bright athletic spotlight with a multi-million-dollar salary, a national television spotlight for his school, a fully funded stadium and the state’s best talent eager to play for a school they once dismissed.

With more than 100 college kids in the Baylor program, Briles is responsible for overseeing his team of assistants who deal with the players in all stages of college life.

“I tell our coaches all the time, the players will mimic their proper behavior, not bad behavior.”

“Coach Briles is great at building you up, he doesn’t tear you down, and he’s always pumping you up. In the four years I was there, I never heard one negative thing from him at practice, not one. He’s always positive,” Weeks says.

“He talks about what’s important to him. What his faith is about, and his coaches follow his example.”

Briles said part of that comes from the example his father-coach set for him while playing for his dad in high school, and part because both his son, Kendell, and his son-in-law, Jeff Libby, are currently coaching with him at Baylor.

But he said that’s what he always wanted to do regardless of the level of football, the on-field television cameras, tens of thousands of fans or nationwide media attention.

“I believe what I do and what has been set for me is to live the life, not talk the life,” Briles says.

In Baylor’s gleaming athletic facility, Yeary’s office is right around the corner from Briles’ office. The two interact on a daily basis, sharing encouragement and messages for each other.

“I think living your life determines your faith,” Briles says.

Today, Briles’ life is good—on the football field, and most importantly to him, off the field. While almost everything has changed about the program he took over just seven short seasons ago, the architect of Baylor revival always wants to makes sure he never does.

Art Stricklin is a contributor to Sports Spectrum magazine. This story was featured in our third digital magazine of the summer. Log in HERE to view the issue. Subscribe HERE to receive 12 issues of Sports Spectrum a year.