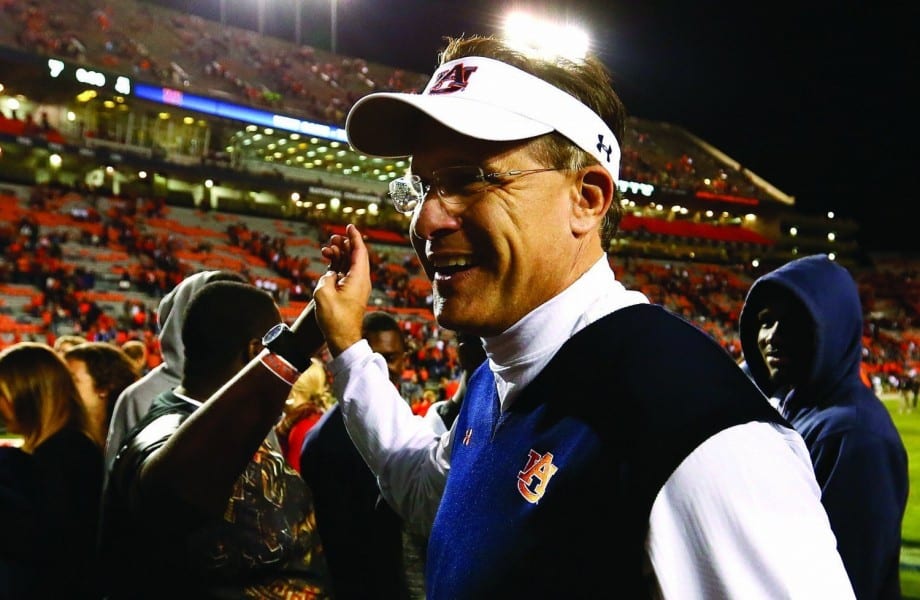 Gus Malzahn walks around the Grand Ole Opry in Nashville, Tenn., at the 2014 K-LOVE Awards this past May.

Amidst the musicians set to perform and the thousands of music-lovers in the audience, the 2013 College Football Coach of the Year is merely a face among faces. Some know who he is. Most do not—not in this environment.

Malzahn, coming off one of the greatest turnarounds in the history of college football—leading Auburn University to the national championship game in 2013 a year after the institution’s worst season in 60 years—blends in. Here, far from the rowdy Tiger fan base, the media flood and the crazed environment of the SEC, Malzahn doesn’t seem to be anything special.

The scene, interestingly, seems to perfectly illustrate Malzahn’s own view of himself. He does not view himself as “important” or “deserving.” He cringes when he sees his name attached to the word “genius.”

In Malzahn’s mind, all he has done is follow the path, wherever it has gone, and has trusted its direction.

“Yeah, I have to pinch myself every now and then,” says Malzahn in a back hallway at the Grand Ole Opry. “My career is a God story—it’s no doubt. He’s put me in the right situations time and time again.” 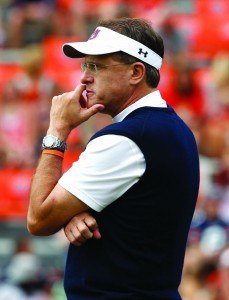 Gus Malzahn’s coaching journey is as much spiritual as it is technical.

The latter is well documented—from the days of his youth when he’d sketch plays while watching his beloved Dallas Cowboys on television, to the decade and a half he spent coaching at the high school ranks, to now being in his second year coaching the Tigers of Auburn University.

There is much more to Malzahn, however, than the brains behind his hurry-up, no-huddle offense, which has been widely adopted across the football sphere, collegiate and professional. Football might be a big part of Malzahn’s life, but it’s also only a part.

“I think it was 1994, I started looking at coaching as my ministry,” Malzahn reflects, “and modeling myself after Christian coaches that were professional and very successful. I feel like that changed everything. And that’s who I am today.”

One of the coaches Malzahn modeled himself after was legendary Arkansas high school head coach Barry Lunney Sr., who won his seventh state championship in 2013. Malzahn reached out to Lunney upon becoming the head coach at tiny Hughes High School as a 27-year-old kid, hoping to pick his brain about the coaching profession.

“I certainly recognized he was serious about becoming the best coach he could and learning things,” Lunney says. “I’m sure I’m not the only person he’s ever gone to, but it’s always flattering to have a young coach come to you and ask you how to do things.”

The conversation that day might have revolved around football—offenses, defenses, practice structure, etc.—but over the years Lunney became a role model to Malzahn in ways that go beyond football. Lunney, who taught a Sunday school class that Malzahn’s mother-in-law and father-in-law attended, seemed to blend football and ministry in a way that was attractive to Malzahn.

“One of the biggest lies we’ve bought into in this country is the separation between the sacred and the secular,” Lunney continues. “What I mean is this: There is no secular if you are a Christ follower—it’s who you are. You don’t put it on a shelf until Sunday, and if it’s not really who you are, then maybe it’s not real.”

By this point, Malzahn was six years into his marriage with his wife, Kristi, his hometown sweetheart, and three years into his tenure at Hughes. It was also a year that, through a series of improbable post-season circumstances, allowed Malzahn to put Hughes on the map, leading the school to its first state championship in its otherwise fruitless history. “It was a miracle the way it all unfolded,” Kristi reflects.

However, while the budding head coach might have been praised for his brilliant mind, his heart was in turmoil.

“That was a big year,” Kristi says. “Wow, I’m kind of surprised he mentioned 1994. There was a lot in our personal life that went chaotic, truthfully. I can remember a night where he was literally at a point where he was deciding to make a choice to live his life God’s way, professionally and personally. It was a life change. We had personally gone through a tough year. And there came a day when he was like, ‘This is it; I will be obedient whether I like it or not, whether it’s comfortable or not.’”

It was their marriage that led to this decision.

“We learned what our commitment level looked like,” Kristi says. “Are you going to be who you say you are and do what you said you would do? At that point, a decision had to take place, and we decided we would do this, and there was no looking back—no if’s, and’s or but’s about it. You look at the Lord and say, ‘I’m doing it your way.’ It was a gut-check time on a lot of things—just making sure your gut is lining up with your heart. Marriage takes a lot of gut-checking. Just staying in those repentant places.”

The decision affected everything. 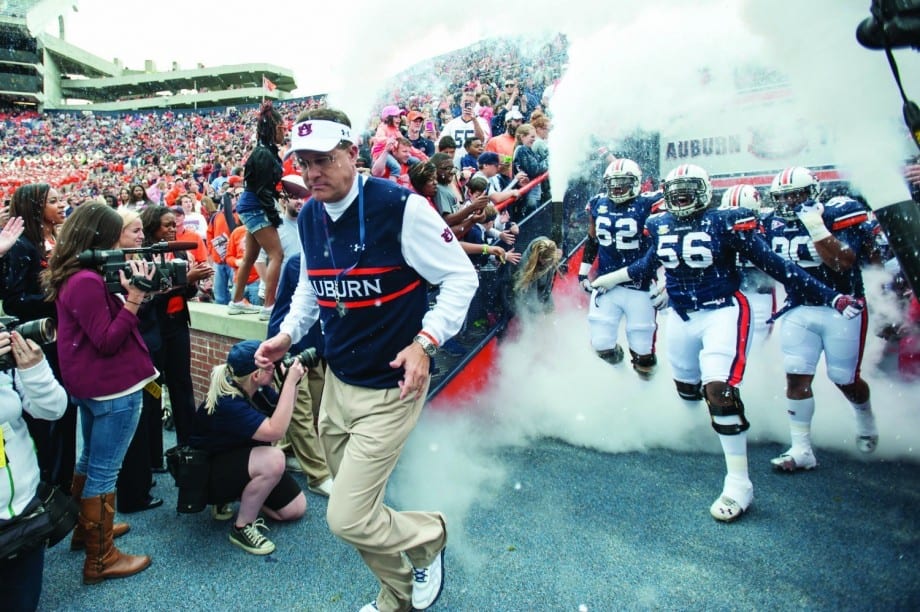 For Gus and Kristi Malzahn, their commitment to one another reflected something much deeper—it was a collective “Amen” to doing things His way, whatever that may be, professional or personal, public or private, and a submission to His will. Even if it was hard. Even if it was contradictory to their feelings, as truth often is.

“We learned that our weaknesses could also be our strengths,” Kristi says. “It’s not like we hadn’t noticed it before. We had noticed for the first several years we weren’t exactly the same. But it was the beginning of noticing the differences in each other and seeing how they strengthened each other. We have learned to appreciate the things that are kind of irritating at times, and have learned that these are actually the things we need desperately for one another.”

Their obedience was a reminder to themselves that God’s way was better than theirs. But perhaps it also demonstrated to God that He could lead them anywhere—because they would be willing to follow.

Lunney continues:  “One day I got a call from the athletic director at Shiloh Christian High School, and I had the opportunity to recommend him (Gus) for a job. I knew about his background and character and upbringing, and then, of course, watching what he did at Hughes—all those things together, I thought he’d be perfect.”

Malzahn accepted the head coaching position at Shiloh and developed one of the most successful high school offenses in the country. The Saints won two state titles between 1996 and 2000 and, at one point, won 44 games in a row. One season, they set a national record with 66 passing touchdowns.

In 2001, Malzahn became the head coach at Springdale High School in Arkansas’ largest division, leading them to the state championship game in only his second season. He published a book and instructional video in 2003 titled Hurry Up No Huddle—An Offensive Philosophy, which was used widely throughout Arkansas and even in the NFL. In 2005, Malzahn’s final season at Springdale, he led the Bulldogs to a 14-0 record and Class 5A championship.

“Right before his 40th birthday in 2005, I realized he had met every one of his goals he had made when he entered coaching 15 years prior,” Kristi says. “At that point, I think I knew in my heart that something was about to change.”

Malzahn became the offensive coordinator at the University of Arkansas (2006), the University of Tulsa (2007-08), and Auburn University (2009-2011) before being named the head coach at Arkansas State (2012), where he led the Red Wolves to a 9-3 record, the Sun Belt Conference title and to a bowl game.

In 2013, he took the reins of the football program at Auburn University. Malzahn took the Tigers to the BCS national championship game in his first season, despite taking over a program that didn’t win a single conference game the year before. This year, the Tigers were ranked No. 3 in the country eight games into their season (when this issue went to print), again in position to make a run at the national championship. 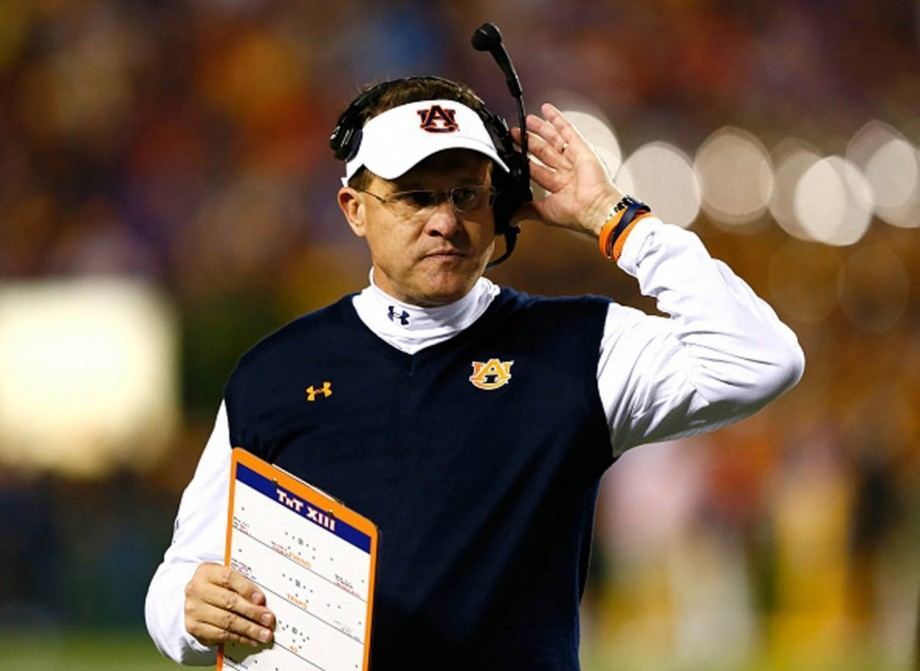 Malzahn has not forgotten the two commitments he made back in 1994—the first to God, the second to his wife and family.

“God is the one who elevates kings and tears them down, as His Word says,” Lunney continues. “He is the one who sets governments and destroys them. Gus Malzahn is a talented football coach. He has a wonderful mind. But look where he is at—who would have ever thought? God places us in those positions. We all have that story. God opens doors that no man can open and shuts what no man can shut. The doors have been opened and he’s been placed in a position, and I think he realizes that. You can get caught up in your own abilities—and he’s got them—but at the end of the day, I think he knows that God has opened doors for him, and that’s very humbling.”

Last year during Auburn’s historical season, Krisi Malzahn was reminded, while doing a Bible study with the coaches’ wives, of how her husband’s love took her to a deeper level of spiritiuality.

“When we’ve gone through yucky moments, Gus has shown up in such a way that there is a deep security,” Kristi says. “He loves me regardless. We may have an argument, but he still loves me through it. I still have that security in our relationship—he wants what is good for me, and I want what is good for him. It reminds me of God’s love. It’s unconditional—He knows everything about me, and He is still okay with me and still loves me.”

These two things—Malzahn’s commitment to God and his family—remain at the crux of his humility. He is quick to point out that everything he has, including his platform as the head coach at Auburn, comes from something much bigger than himself.

Says Kristi: “God says, ‘Obey me,’ and if you are obedient, you will be blessed. The blessing, however, is just being at His feet.”

And sometimes, bowing before His feet allows Him to move through our own—and take us places we never expected.